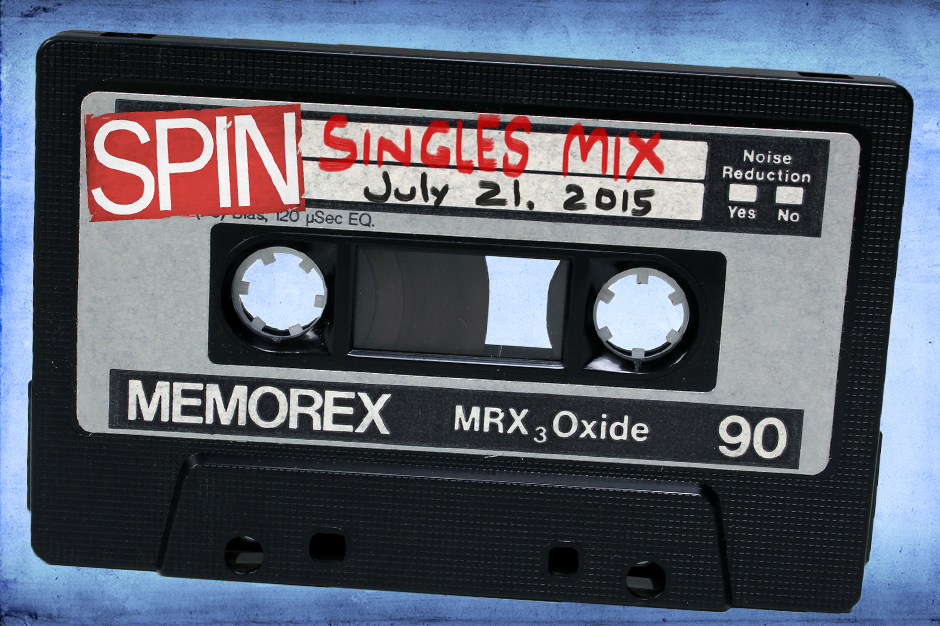 Welcome to SPIN‘s Singles Mix! SPIN staffers have rounded up their favorite, must-hear tracks for your personal playlists. Collecting the finest from yelping synth-soul-turned-hip-hop experimentalists, Swedish pop party girls, West Coast rap regionalists, and more, these are the songs you need to know right now.

Calvin Harris feat. Disciples, “How Deep Is Your Love” (Sony)
Is this the precipice of a new Calvin Harris album? Is it a one-off, f—k up the summer smash meant to be used and abused before discarding? When it’s this magnificently polished and grimy, who cares? The uncredited vocalist (said to be Norwegian songwriter Ina Wroldsen) coos and wails at alternating speeds as if constantly insistent on attention, much like the melodies themselves. — BRENNAN CARLEY

Empress Of, “Kitty Kat” (Terrible Records)
Brooklyn-via-Bronx singer Empress Of, a.k.a. Lorely Rodriguez, recorded her debut album, Me, in a tiny town on a lake in Mexico, but even such a remote place isn’t secure from cat-calling men on the street. In response, she wrote “Kitty Kat,” a fierce conflagration of her flighty yet determined voice and atonal, crunchy synths. “Let me walk away,” she commands, but it’s hard to step away from such a powerful and compulsively listenable song. — H.B.

Icona Pop, “First Time” (TEN/Big Beat/Atlantic)
Ironically the first song the duo ever wrote together, “First Time” does the requisite amount of peaking and dipping. It’s a drum-rolling, grand unveiling of drunken harmonies filtered through a clattering synthesizer. Part of Icona Pop’s fun is their no-frills, teeth-glimmering fun; it’s the easiest thing in the world to imagine Aino and Caroline linking arms, smoking weed, and stumbling in the streets together.  — B.C.

LIZ, “When I Rule the World” (Mad Decent)
Mad Decent would-be pop star LIZ debuted “When I Rule the World” in a Samsung ad, a curious choice if not for the involvement of Sophie, the U.K.’s preeminent constructor of post-capitalist jingles. The song itself builds up and out from Sophie’s McDonaldland latticework into the sort of childlike Red Bull rush that the rest of the PC Music crew wish they were constructing on a regular basis. If, as Sophie has said, branded content is the future of the music world, LIZ may well rule it. — COLIN JOYCE

Rustie, “Big Catzz” (Warp Records)
It’s about time for new material — not to mention a free download — from Rustie: Glasgow’s foremost (and formerly) maximalist producer hasn’t released anything since his sleek, stunning sophomore album, Green Language, nearly a year ago. The three-minute track rears up to the gate on a frenetic drum roll, breaking only for his roiling synth beds. Halfway through he lets the hammer drop, bass cutting in and out with just enough static, as if he keeps having to recalibrate his speakers. — H.B.

Trouble Knows Me, “Trouble Knows Me” (Madlib Invazion)
When not unleashing feral growls and dancing his way to Youtube stardom, Future Islands frontman Samuel T. Herring moonlights as Hemlock Ernst, a dexterous MC with a relaxed flow. Herring sounds almost unrecognizable on this new collaboration with jazz-rap giant Madlib: blanketed in vinyl hiss and shards of Stax-era horn lines, Ernst’s monotone rhymes would make for a welcome guest verse on the next Madvillain record (should it ever come). — TREE PALMEDO

SPORTS, “Saturday” (Father/Daughter)
Everyone’s favorite day of the week gets a precious blast of sugar in this heartfelt indie-pop anthem led by Ohio vocalist Carmen Perry. Produced by Kyle Gilbride (Waxahatchee, Girlpool, Swearin’), “Saturday” doesn’t even surpass a minute and 30 seconds, but that’s all the more reason to align it with a weekend; goodness knows that never lasts long enough either.  — RACHEL BRODSKY

YG, “Twist My Fingaz” (Def Jam)
Should you need a break from the moral heft of Kendrick’s To Pimp a Butterfly and the icky gloom of Earl’s I Don’t Like Sh—t, “Twist My Fingaz” is the summer antidote to Cali’s string of spring introspection. Terrace Martin produces, but this is a Dr. Dre-influenced record through and through, complete with heavy bass, whining synthesizers, and braggadocio rhymes. (Ironic, then, that YG claims he’s the “only one who made it out the West without Dre.”) Still, “Twist My Fingaz” is a suitable hold-me-over until the next big West Coast album drops. — ANDREW STONE