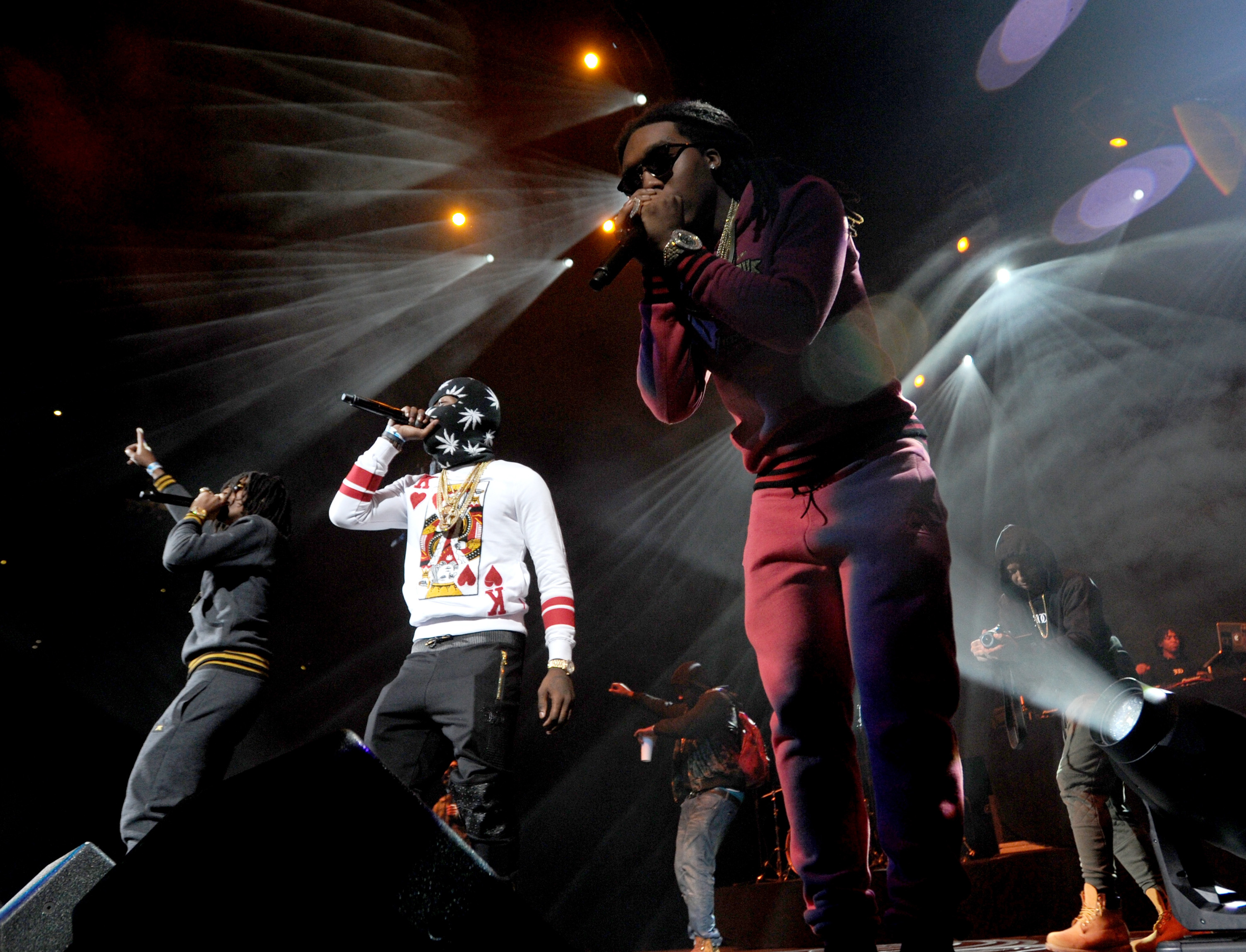 “Trap Funk,” one of the last songs on Migos’ long-awaited proper debut, Yung Rich Nation, is glorious. Horns dance, a big, boozy bassline booms like the voice of God and piano chords cascade, the keys giggling as if they’re actually being tickled. It’s triumphant, a song of victory.

The conquest of releasing their first album has been hard won, however. At the top of 2013, the Atlanta trio of Quavo, Takeoff, and Offset watched their creaky-twinkly “Bando” flit to the top of the rap world’s playlist. Within six months, the skittery, Zaytoven-produced track “Versace” had gone even more viral, with Drake mimicking Quavo’s flow on its remix and critics lauding Young Rich Niggas as one of the best mixtapes of that year. Then they shrugged off any lingering whispers of their being one-year-wonders and racked up more W’s in 2014 with the boundlessly energetic “Fight Night,” the most successful single of their career. Capping their year? A joke about them being better than the Beatles that spawned very serious conversations about race and Migos’ relevance.

But in 2015, Migos’ momentum came to a screeching halt. In April, Quavo and Offset were arrested and charged for felony possession of drugs and firearms, and the trio was forced to postpone their tour until July. Complex mentioned the “fast evaporation of Migos.” Fellow ATLiens Young Thug and Future prospered in the meantime.

Thankfully, Yung Rich Nation did in fact appear and says “Not so fast” to anyone who wrote off rap’s biggest actual new group in years. “Memoirs,” the opening track, is urgent with frantic keys abutting balloon-like synths as the guys confidently proclaim their own Sorry 4 Tha Wait: “I know you been patiently waitin’.”

Thing is, they do deliver, and even with some pleasant surprises. Sure, there are a couple of Zaytoven classics here (“Migos Origin,” “What a Feeling,”), but the most interesting tracks veer left. Imagining a thrill ride with no consequences, “Highway 85,” — which interpolates both Eazy-E’s “Boyz in the Hood” and Young Bleed’s “How Ya Do That,” — works better than it should. With almost 30 million plays, it’s no secret that “One Time” is a smash; with Migos’ signature flow and dying-battery synths dolloped onto a smooth melody, how could it not hit in the club? And the menacing throwback slink of “Gangsta Rap” still manages to sound fresh.

Of course, there are a couple of stabs at the classic hooks of old Migos. Cutting their usual brick with Young Thug works wonders on “Cocaina,” but with the cash grab “Pipe It Up,” they’re trying too hard to plant another big, dumb hook like “Hannah Montana” in our heads. Still, for a group teetering on the verge — again — of being counted out, Migos have proved — again — that they have more than one trick up their sleeves.