"There is a beauty in listening to someone's sh—ty idea" 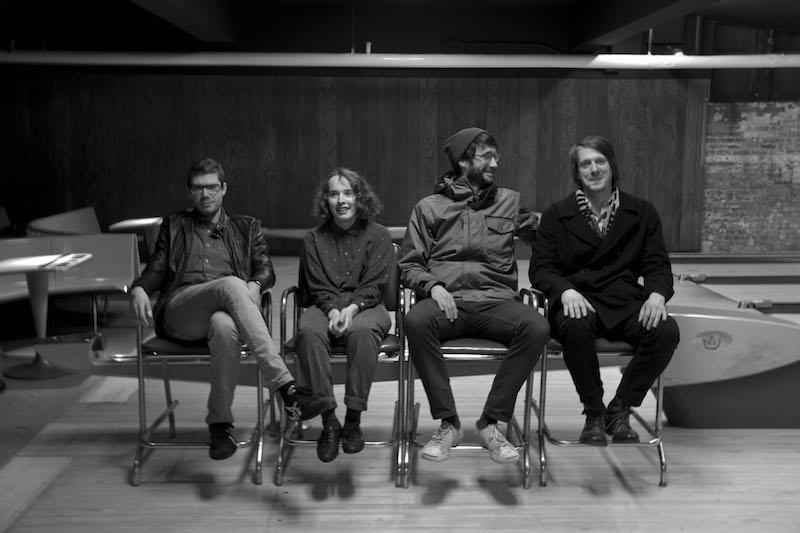 Who: Two members of Pleasure Leftists, bassist Steve Peffer and guitarist Kevin Jaworski, met when they attended Cleveland, Ohio’s nearby Lakewood High School together and thrashed their way through two hardcore bands — straight screamo-delics Nine Shocks Terror, and the slightly more experimental Homostupids, which arose from the ashes of the former in 2006. Though each had “totally different ideas of what they wanted to do” (Peffer wanted to explore music with a little more “indirect ambiguity to it,” rather than “the really abrasive, just beating you over the head, very obvious stuff”) they played really well together. Four years later, after recruiting drummer Mark TerVeen, they began cutting moody post-punk exercises informed by the debut albums from Killing Joke and new wavers Modern English.

Peffer met singer Haley Morris at the Cleveland State University radio station, where he hosted freeform guitar-and-bass music on his Budget Rock show and she wowed him with the voice(s) — her singing voice echoes between Siouxsie and Savages’ Jehnny Beth — she used on her own program, which was called Pleasure Leftists (“I just like the wordplay,” he says of his decision to use that name). She auditioned over a five-song EP the three instrumentalists had recorded, and “it was like holy f—king s—t,” says Peffer, who asked her to join the band immediately. “I can’t describe it at all, but I read a review [of Pleasure Leftists’ self-titled LP], and they referred to her vocals as ‘crying Dracula.'”

Record Store Clerks Know Best: Tired of working for other people, former record store clerk Peffer decided to take matters into his own hands. In 2012, the 39-year-old opened the 400-square-foot Hausfrau Record Shop in a “frumpy little store front” next to a “fancy movie theater” in Cleveland. But rather than stocking all new releases, which he says have a limited shelf life — the average run for an underground album, he tells SPIN, is 300 — he decided to decrease the quantity but increase the quality of his selection a little more. “People don’t, at least in my experience, take as many chances in buying music anymore,” he says. “The amount of new stuff that comes out every f—king day is ridiculous. It almost can be soul-sucking. I wanted to kind of curate an interesting assortment of stuff that would be just as relevant in a year or two. I wanted to keep it small and keep the quality level a little higher than the vast majority of new music, indie music, or pop music.”

But Peffer separates business and pleasure: He’s not concerned about where Pleasure Leftists fit on the Staff Picks table. For him, writing gloomy 4/4 rhythms and lyrics evocative enough for the listener to project whatever they want onto them is more about a reaction to (or, more accurately, a departure from) the rapid-fire screaming of his earlier bands. “I wanted to hear something different than what I had been hearing, and enjoy doing it,” he says. “It’s cathartic.”

Burn One (Rhythm Section) Down: All but one of the songs on The Woods of Heaven, Pleasure Leftist’s forthcoming LP (out August 28) on Canadian punk stalwart Deranged Records, frame Morrison’s husky, vaguely indiscernible wail in a three-legged structure of drums, bass, and guitars. Peffer says they surprised themselves with an alternate approach on the second-to-last song on the record, “Burning Down.” “It seemed like turning it into, for lack of a better word, a rock song was almost doing a disservice to it, or cheesing it up,” he says. “We just ended up using the riff, stripping the drums off, and letting this ethereal doom and gloom tune play out with just vocals and guitar and bass.” It’s one of the album’s most pained songs, alternately flaring and sputtering while a drum pad plays in the background like a heart that’s slowly losing the will to keep beating. Like their process during Morrison’s audition, the three men would get together and jam out a track “that doesn’t get stale very quickly” during the year-long process of writing The Woods of Heaven; then, she would sketch out lyrics or take the instrumentals home to map them out.  Though they often vibe on the same wavelength, Peffer admits, “There’s a beauty in listening to someone’s sh—ty idea.”

Road Rituals: Though The Woods of Heaven sounds like the opposite of a sophomore slump from four people who have finally settled into their motorik groove, Peffer admits there were some growing pains along the way. “It’s a group project; while it’s not a 100 percent democracy, it’s still four people with ideas simultaneously trying to agree on something,” he says. At one point recording their self-titled debut was so discouraging he had to walk away from the process for a few months.

This instinct for self-preservation as an individual and as a band extends to the upcoming two weeks they’ll be spending on the road in a minivan, touring the Midwest, Pacific Northwest, and Canada. To deal with such close quarters (especially since Peffer doesn’t have a driver’s license), Pleasure Leftists are literally taking it outside. “We’re stuck in a f—king van together, so what can we do to squeeze all the juice out of the orange?” he says, “so we’ve started going hiking, kayaking, going to the shooting range. And this next part of the trip in Oregon, we’re going to go ziplining, which scares the s—t out of me.”