Girls Names Understand What it Means to Be ‘A Hunger Artist’ 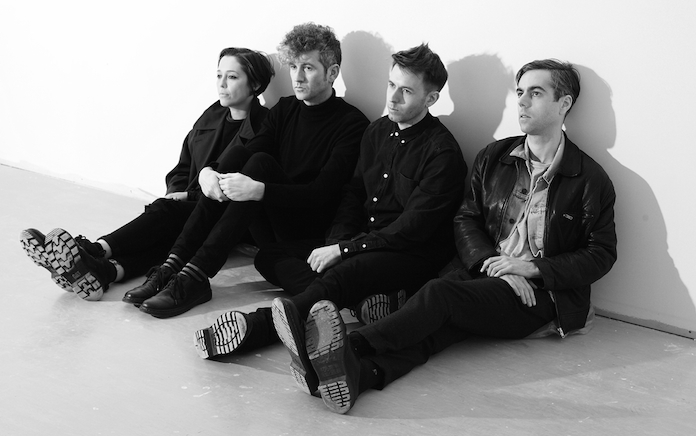 Girls Names, a Belfast-based post-punk foursome, stare down the realities of a musician’s life in their new single “A Hunger Artist” — taken from the band’s upcoming third LP, Arms Around a Vision (out on October 2 via Tough Love).

“I’m not starving or anything, but I’ve practically been living hand to mouth since I was 22,” writes the now 30-year-old frontman Cathal Cully in a press release. “Most guitar music now is just a playground for the rich middle classes, and it’s really boring and elitist. We’re elitist in our own way, in that we’re on our own and you can’t fuck with us when we’ve nothing to lose.”

In their winding six-minute track, Cully and the rest of the band tackle this idea with reverb-heavy, shadowy melodies that ebb and flow with the same darkly expressive determination as peak Joy Division or Bauhaus, or, from the 21st-century post-punk set, Interpol.

Listen to “A Hunger Artist” below, and read SPIN’s Q&A with Cully, where he details the ways in which he’s had to work tremendously hard to achieve a modicum of success as an artist (banana sandwiches and finding jobs in between touring), and how whatever “suffering” he’s felt is nothing compared to Europe’s refugee population and myriad other needy communities.

Being that “A Hunger Artist” is about suffering for one’s art, in what way have you personally experienced this?
I wouldn’t take everything I’ve written verbatim. There’s a lot of catharsis at work, but there’s a lot more character orientation than before. Yes, some of it’s personal. I’ll not deny that. But I’m really proud of it all lyrically and the performance and style of this record.

I slightly suffered the other day having to drive through the night for 11 hours in the 30-degree [Celsius] heat after playing a gig in Paris to make a festival sound check in Toulon for 11 am. I proceeded to do the check on an uncovered open stage in the midday sun at 42 degrees Celsius. I say “slightly suffered,” as an hour later I was kicking back in the hotel pool!

What were some penny-pinching methods you put — or still put — into practice?
As I type this I’ve just got off the ferry back to Ireland and made a banana sandwich for my breakfast from a left over baguette from yesterday’s stop off at a French supermarket. Got six knock-off wheat beers for €3.70, too! Necked them on the boat last night. We had a blast!

Golden rules of Girls Names touring — don’t leave any of the rider behind. Pack that sh—t up! There’s 3/4 a of bottle of gin and a bottle of tonic I’ve stashed in the van, which will be nice for this weekend back home. If there’s breakfast included in your hotel, bounce up out of bed and eat the free breakfast. If there’s a buyout for dinner, keep the money and eat the rider. New Order used to [save their per diems when they were skint. I follow that discipline whenever I can.

What was the lowest point in your “hunger,” emotional or physical?
I got really sick at Christmas just straight after we tracked the record, and it has really only taken me until the last month to fully recover 100 percent. I’m not saying being in this band contributed to this wholly, but it certainly didn’t help the situation. I had a few mental and physical issues building on me for potentially years that I didn’t address out of sheer ignorance and denial, but the uncertainty of this kind of lifestyle doesn’t help. So there has been a fair few low points in the last year.

There’s a constant financial strain with trying to figure out how the rent is getting paid for the next month or so, finding jobs between tours, trying to maintain relationships, trying to assess where you’re going to be for the next six months. Deadlines, etc. Constant juggling. But I think we’re doing alright. I’ve learnt to chill out a lot now and not let things build up inside. Talking helps. Life’s pretty kind to us at the moment. Just spent four days in Europe during the biggest heatwave in years. My complexion is glowing!

Why continue through the hardest parts?
We’ve worked extremely hard to get this band were its at, and this new record is great. Am I supposed to just get an office job back in Belfast now for the next 40 years until I die?! Because [U.K. Prime Minister] David Cameron and [U.K. First Secretary of State] George Osborne’s attack on the poor is getting worse, and they’re gonna f—king make sure I’ve got no pension if I live that long. I’ll take the first option which lets me go skinny dipping in the Mediterranean with my band mates and best friends at four in the morning until the sun comes up and try and live life to the full as far away from these bastards as possible.

You have said that the new record is not a direct narrative of your lives. But are there other ways you present the idea of suffering for one’s art within Arms Around a Vision?
Any musician who thinks they’re suffering because no one buys records anymore needs to get real. That’s never going to change now. The world has moved on. We just drove through Calais [France] the other day. You’re obviously aware of the crisis that’s happening over Europe and the mass influx of war-torn refugees. That’s real human suffering. Although the media seems to forget they’re humans as opposed to just being “migrants.” Greece, a beautiful country with some of the most friendliest, beautiful people I’ve met is getting f—ked over by Europe and the IMF, so I don’t really think I can live with myself by using that word “suffering.”

It really pisses me off when I hear [about] these posh middle-class kids in bands trying to slum it in a stupidly overpriced flat in east London and their allowance is getting cut off from daddy or whatever. I might be poor, but I live in relative comfort with enough money and friends to have a drink or two at the weekend and enjoy the small things in life. We’re doing alright.