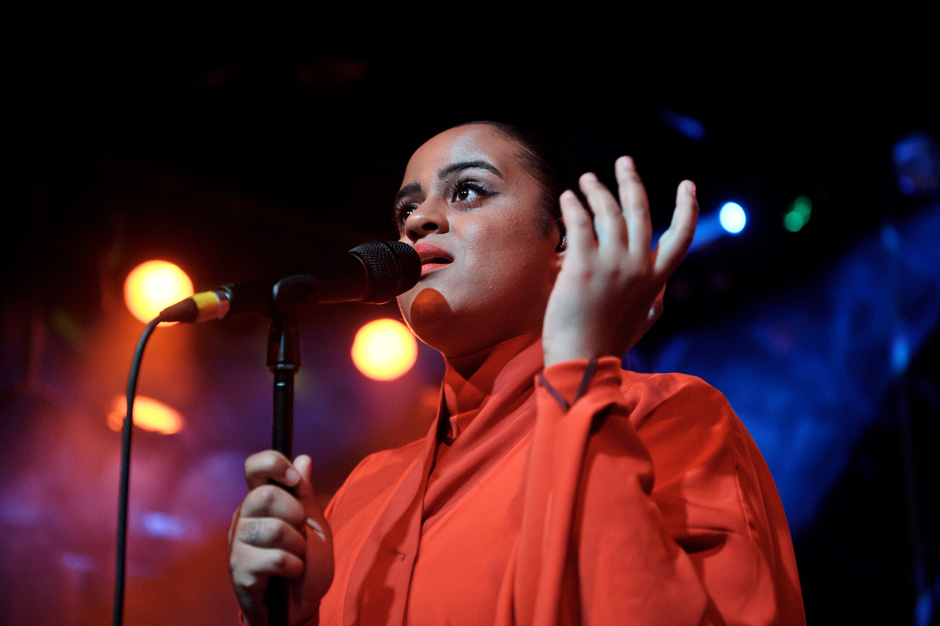 After three years of work and two critically acclaimed EPs to her name, Swedish soul-pop singer Seinabo Sey says she’s been stressing about putting the finishing touches on her upcoming full-length debut, due in September. But if she could have her way, it’d come out in October instead.

“I don’t have any more time,” she says with a nervous laugh after soundchecking at New York City’s Webster Hall in late May. “In my mind, I’m like, ‘I need to go back into the studio and do one more thing,’ but I think this is all about me not knowing how it’s supposed to feel when you finish an album. I’m having a hard time letting go.”

What originally started as an in-studio singing gig for the 24-year-old’s longtime producer, Magnus Lidehäll, has now blossomed into a solo collection of 11 or 12 achingly raw songs, all with a rhythmic undertone that keeps her grounded, heartfelt message constantly on the move.

Born of Swedish and Gambian lineage, Seinabo says the as-yet untitled album — “I think I’m just going to take the song I like the most and go, ‘This is what it’s called!'” she says — will incorporate tracks from her previously released EPs as well as a batch of six or seven new ones, the best of which she says were stitched together on a tight deadline. “My producer Magnus wants it to be quick,” she says. “He doesn’t overanalyze it. A lot of other people have to sit and change and change things. Being such a spur-of-the-moment writer, I procrastinate things to the limit to where it’s dangerous for my life. “

“He’s very patient,” she says of their symbiotic relationship. “When he met me two years ago, I had a different set of skills and he had to teach me a lot of things. He understood how to inspire me. I guess chemistry works.”

Part of the reason Seinabo Sey’s tracks resonate is because she says she’s careful to write them with a universal audience in mind. “It sounds all ‘Mother Teresa,’ but I’m not the main focus,” she says. “They have to be timeless.”

That’s not to say there isn’t weightier introspection on the LP. “There’s one that’s about my father called ‘Burial,'” she says. “I had a moment where I was like, ‘I want to write about family members.’ My parents are the backbone of who I am as a human being, and they’re also the reason for all of my insecurities, which I write all of my songs about.”

The singer is quick to add that she’s been careful not to write any songs outside of the realm of personal experience. “I don’t write that many love songs because I seem to have the same [recurring] problems when it comes to love,” she says, laughing. “The album is — now that I look at it — what I’ve learned thus far. I’m 24. I’m an honesty junkie. I can’t stand myself when I’m tipping around a point or not telling the truth.”

As far as Seinabo’s place in the modern Swedish pop scene, she knows she could be cashing in anytime she wants. “The whole climate in Sweden is Max Martin,” she says. “I could send a song to any one of these people, but I’m not compelled to just yet, only because I don’t think I have the peace of mind to be able to create for myself and for other people yet. I’m not organized enough, but I should try to be, because that would be lucrative. I hope one day I’m going to be less of a hippie and more of a robot.”

Seinabo says that when her own album finally does hit shelves, she’ll feel relief. “I just want people to hear everything so I can move on creatively, because it’s burning a hole in my soul,” she says. “This has taken so long. I just want to evolve and I want to create. I want to sing until I’m old. I want to write songs again.”

Seinabo Sey Wanders Through the Darkness in ‘Poetic’ Video