Review: Thundercat’s Fatalist Soul Enters the Void on ‘The Beyond / Where the Giants Roam’ 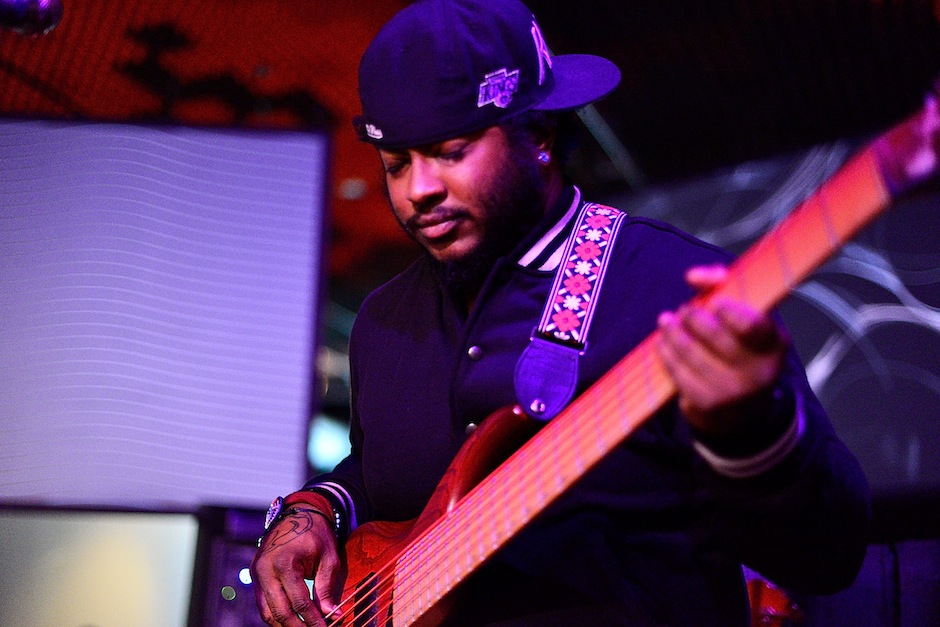 Word to the Weeknd, Brainfeeder’s resident bass-playing psychonaut Thundercat is back and he can’t feel his face either. He says as much from the very first moments of his new EP, The Beyond / Where the Giants Roam, but it’s a seemingly familiar sentiment for those who’ve followed him since he first stepped out on his own. The man born Stephen Bruner has already written rapturous ballads about the mind-expanding benefits of DMT and Ecstasy, but this isn’t just druggy déjà vu — the numbness feels different, darker this time around.

Bruner spent a good chunk of his last year working as both muse and major player on socially and existentially conscious records by Flying Lotus and Kendrick Lamar, and it seems he’s turned away from the tooth-bearing hedonism in his own work as well, using his cosmological soul-jazz excursions to explore something far more human. If he can’t feel his face, well, it’s not because he’s high, but because he can feel Death creeping in. This sort of thing has been on Bruner’s mind from the very beginning of his solo career — his first two solo albums both centered on ideas of Apocalypse, after all. But on The Beyond / Where the Giants Roam he’s finally entered the void.

There’s a “Song for the Dead,” a solemn nod both to our country’s tragic current events and his own loss of close friend and collaborator Austin Peralta, where Bruner sputters out lamentation, fluttering multi-tracked falsetto vocals advising those lost to “close [their] eyes, rest [their] heads” and “find [their] way home.” Elsewhere he offers grit and gore, singing of “blood on the floor,” which seems to have been caused by his very literally misplaced heart (“Them Changes”).

It all lies in sharp contrast to the interstellar party jams that have laced his previous records. Tracks like “Oh Sheit, It’s X!” were composed of equal parts George Clinton and Rick and Morty’s psychedelic sci-fi vomit, but even instrumentally here Bruner’s mostly receded into dim blues and dull greys. For his recent work with Kimbra, and then all throughout his work on Flying Lotus’ records, he’s treated his kaleidoscopic bass leads like fistfuls of confetti, as if those parts coalesced to form shimmering exclamation point at the end of You’re Dead!. But here he mostly sits back. The fretwork is as virtuosic as ever, but in keeping with the more somber atmosphere, he’s more likely to use the bass for simple melodic embellishments, like the gentle arpeggios on “Lone Wolf and Cub” — more like gently underlining his fatalist lyrics in spit and blood than using big emphatic punctuation.

Lotus and his fellow former collaborator Kamasi Washington turn up again here to add to the downcast din, but their inclusion only highlights Bruner’s dispositional shift. Washington’s bristling saxophone is relegated to the deep distance on “Them Changes” and Lotus’ often head-spinning electronics are dealt a lighter touch than ever. In the past, Thundercat went for bombast and psychedelia, at least partially in attempt to match the boisterousness of his collaborators. This EP, however brief, stays smaller, taking a sobering, and importantly a sober, look at both life and what’s Beyond.