Review: Miguel’s ‘WILDHEART’ Is a Grower, Not a Shower 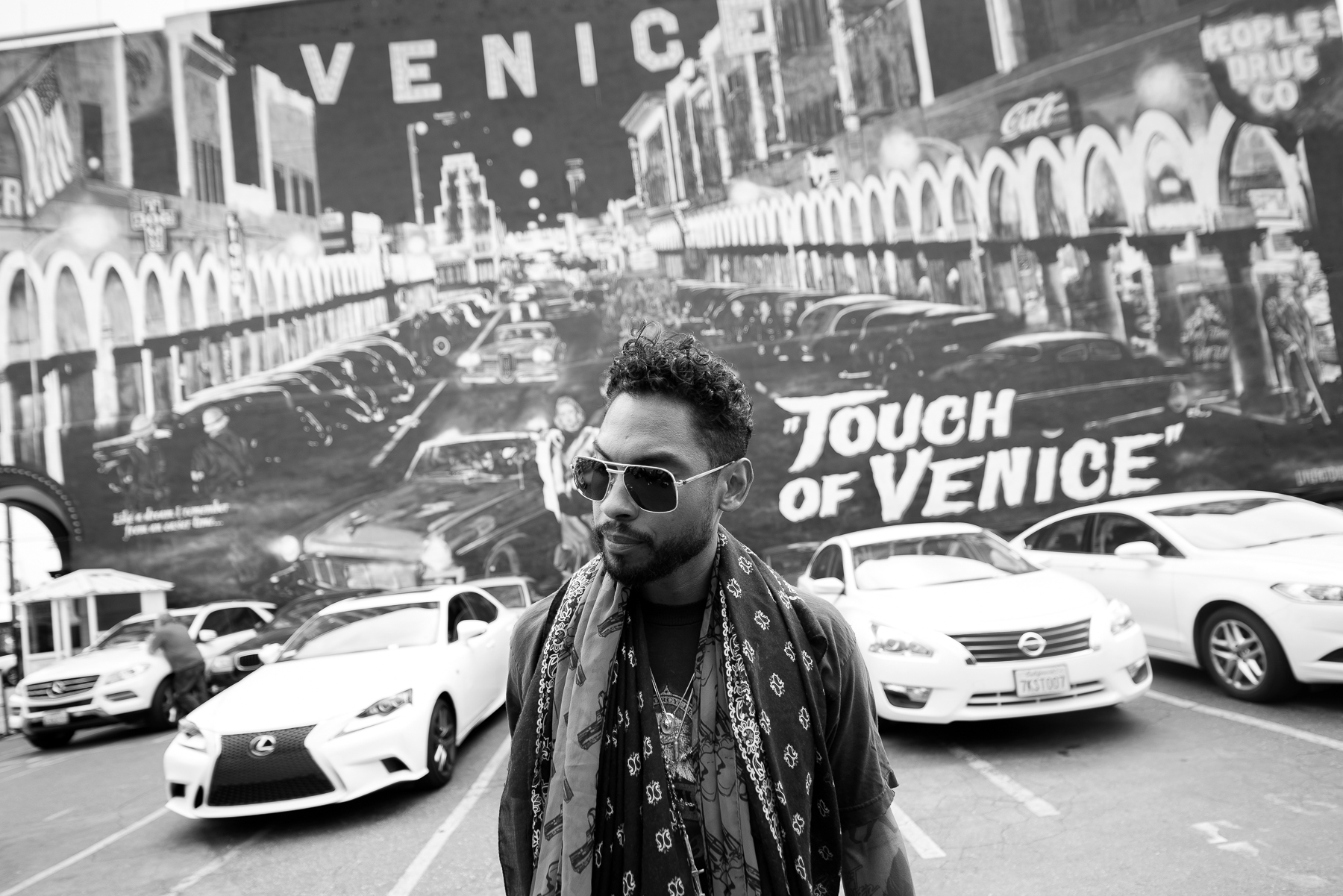 Ridiculous as it seems to say, f—king has gotten a bad name in R&B lately. As SPIN’s Chris Martins recently alluded to, for so many of the genre’s leading men, sex is treated like a necessary evil — the Weeknd is haunted by it, Drake is bored and frustrated by it, The-Dream overindulges in it out of rote, joyless habit. (Trey Songz and Chris Brown certainly still seem like fans, but their treatment of it is tasteless and juvenile enough that you kinda wish they’d go flaccid already.) The only R&B stars of recent years to consistently give copulation its due as a truly natural, zesty experience — hey, she made the Lebowski reference first — are Beyoncé, whose self-titled 2013 monolith treated domesticity as the jumping-off point to all earthly delights, and Miguel, whose 2012 masterpiece Kaleidoscope Dream turned Saturday night scheming in a seedy bar into something spiritual enough to preach about at church the next morning.

Kaleidoscope’s biggest hit, the 23-week-chart-topping “Adorn,” was the best and most extreme example of Miguel’s body gospel. It treated sex as inextricable if not downright interchangeable from love, and it soared with the kind of untempered reverence and awe of a 21st-century “Maybe I’m Amazed.” Commercially and artistically, it’s a near-impossible standard for Miguel to live up to, and on his third album WILDHEART, he doesn’t even try to — there’s no choir-level hymnals to love-making be found on here, and indeed, he’s not even really elevating carnality to the heavens anymore, instead treating it as a distinctly earthbound, glamour-less concern.

That’s OK, though. As brilliant as “Adorn” was, where Miguel really excels isn’t necessarily paying tribute to romance’s all-encompassing glory, but rather venerating the less traditionally celebrated phases and shades of the experience. Kaleidoscope singles “Do You…?” and “How Many Drinks” turned the cheesiest pick-up questions into soul-searching inquiries whose exploration could legitimately take all night, while “Quickie,” a highlight from his 2010 debut LP, All I Want Is You, was lithe and exciting enough in its description of the titular encounter to make the sexual marathons detailed in most R&B ballads of its ilk sound overbearing by comparison. Miguel understands the significance of all the little moments on either side of The Big Moment and he’s as skilled at illustrating their power as any unquenchable singer-songwriter this century.

The stark contrast between WILDHEART and Kaleidoscope Dream is immediate, with the intro to first track “a beautiful exit” (yes, nearly all song titles here are either entirely lowercase or CAPS, implying further remoteness before the album even starts) beginning with an ambiguous breaking-news report that’s quickly swallowed by an imposing fuzz-guitar lurch, as Miguel entertains romantic car-crash fantasies, excitedly yelping on the chorus, “We’re gonna die young!” like a gleaming synthesis of James Dean and Kesha. Opening on such a fatalistic note — then doubling down on it with the crassly transactional “DEAL” (“Love me for profit, I can make you go down”) and the aggressively disaffectionate “valley” (“Force my fingers in your mouth / F—k you like I hate you baby”) — suggests that WILDHEART will be something like Miguel’s Beautiful Dark Twisted Fantasy, the album where he turns the corner on his eager-to-please early days and embraces a heel turn to Dulli-esque lothario knavery.

It’s to Miguel’s credit that the album never quite gets there. As caddish as his lyrics are here, the album doesn’t cross over from seedy to sinister — even the bluntest moments on the album are still softened by the warmth of the production and the irrepressible sensuality of the singer’s multi-tracked weapon of mass seduction. Miguel is the rare R&B singer who can sing about sex in its basest, most unsentimental form and still have it sound sexy; when he callously lists off “lips, tits, clit, slit” in the breathy refrain to the definitive “valley,”  it’s no less tingling than the exhortations of “These lips can’t wait to wait to taste your skin” from “Adorn.” (The “f—k” that pierces through the chorus on “DEAL” lands harder than any utterance of the word since Nicole Kidman ended Stanley Kubrick’s filmography on a four-letter note.)

Rather, WILDHEART excels in bathing the dirtiness of California’s underbelly in gleaming sunlight, illuminating without editorializing. It’s grimy stuff, for sure, but Miguel’s tales of violent lust and general erotic oblivion never feel judgmental, even of himself, and he’s evenhanded enough that after a couple of tracks of being on the consumer end of paying for play, he and guest rapper (and legendary cameo artist) Kurupt turn vendor on “NWA,” declaring that they “should make you pay for this.” (Empathy has long been an asset of Miguel’s jams, and we get an origin story of sorts for that here with the outcast anthem “what’s normal anyway?,” the album’s most personal and revealing cut.)

Thematic concerns aside, Miguel’s first two full-lengths resonated so strongly because they were rich enough sonically to match the vividness of the songwriting. To that end, WILDHEART may be Miguel’s strongest effort yet, deep in rhythmic detail — the drum’n’bass percolation that swells underneath “a beautiful exit,” the trappy handclaps subtly propelling “Coffee” — yet surprisingly raw at its core, nearly every song reducible to a fat guitar riff and circuital drum part. The production never lets you get too comfortable, either: Effects like the cowbell thwacks of “NWA” or the split-second synth swoops of “destinado a morir” seem specifically designed to snap you out of the 75-degree haze, while unexpected left turns like “leaves” finally going full-throttle in its final minute and “DEAL” double-timing into D’Angelo-worthy swamp-funk keep the set gratifyingly off-kilter.

If only he brought his sense of humor. Miguel’s idolization of Prince and Jimi Hendrix has been evident throughout his career, but those dudes knew when to throw a little levity into their loverman routines; on WILDHEART, you’ll never hear Miguel extending any vaginas-as-automobiles metaphors to full song-length, or concluding that it’s OK to lose his baby, long as he still has his guitar. Whether he’s playing the sincere troubadour or the snake tempting original sin, he plays it a little too straight-faced throughout: Kaleidoscope was playfully ostentatious enough to have titles like “Pussy Is Mine” and hooks like “I wanna do you like drugs tonight,” but WILDHEART’s only chuckle-worthy moment arrives courtesy of Kurupt’s peerlessly inspired rhyming of “Molly and coke” with “Lee Iacocca.” By album’s end, it gets a little exhausting. Miguel’s funniest move of 2015 was adding the “(F—king)” parenthetical to the Wale-featuring single version of “Coffee”; while Wale is mercifully absent from the album version, so, sadly, is the parenthetical. Such a wink or two would have gone a long way here.

Speaking of “Coffee,” though. While nothing on the album is as immediately rousing (or as likely to spend nearly half a calendar year on top of the R&B charts) as “Adorn,” with every subsequent listen, “Coffee” further reveals itself as equal to the Kaleidoscope high mark. Unfolding like a spiritual follow-up to “Do You…” and “How Many Drinks?” the WILD centerpiece focuses on the friskiness of post-pickup flirtation, building through “bubble bath, Truth or Dare, Would You Rather?,” culminating in “drugs, sex, and Polaroids,” and ending, of course,  with “coffee in the morning.” The droning synth bubbles and nervously clicking drums approximate both the pulse-racing of anticipation and the sighing ecstasy of post-coital comedown, and on an LP full of toxic screwing, the simplicity of Miguel cooing, “I don’t wanna wake you / I just wanna watch you sleep” is sweet relief.

The 13 tracks on WILDHEART are stunning individually and hypnotic collectively, perfect for staring out from your hotel balcony in deep contemplation while your newly significant other beckons you back into bed. It’s not quite as satisfying as Kaleidoscope Dream, but it expands that album’s palette, pushing Miguel into further depths without submerging him in the squalor. All that’s missing is a “(F—king)” parenthetical in the album title.