The real world is hard, and Kacey Musgraves knows it. She knew it on her shit-talking debut, Same Trailer, Different Park, with such auspicious introductions as “Merry Go ‘Round” (which slagged off accepted small-town life cycles in lines like “We get bored so we get married”) and the game-changing “Follow Your Arrow” (the first LGBT-friendly CMA winner for Song of the Year). She knew it on last fall’s soundtrack one-off, “Love Is a Liar,” which continued to slash away at traditionalist conceptions of modern romance (Sample lyric: “Makes you think you’re on a high / When you’re really just on a high wire”).

She knows it too on Pageant Material, her understated sophomore masterpiece. Here, Musgraves draws on her small-town past while broadening her horizons ever so slightly. Countless non-country fans look to her as their exception to the genre, but with each album, the 26-year-old slowly, precisely rips that pigeonhole into little pieces.

There’s nothing not country about every step she takes; what separates and sends Musgraves soaring higher than her peers is her writing — the storytelling on Pageant Material could fill a memoir, secondary sources and all. The Grammy winner and her regular lyricist partners — Brandy Clark, Luke Laird, Shane McAnally, and Josh Osborne — are the Inside Out of music, precisely capturing the microcosmic sensations that steer our every waking move with no frills. “Ain’t gotta be alone to feel lonely,” she muses on “High Time,” a stoner jangler filled with the sort of revelations no mind-altering substance could capture as well as Kacey does. She gives a voice to those trapped inside their own minds, offering advice like “nobody’s everybody’s favorite” half-flippantly on “Cup of Tea.”

“Late to the Party” treats its verses like little spikes of Musgraves’ nerves before unfolding a chorus that holds the mirror up to her own misgivings: “Who needs a crowd / When you’re happy at a party for two,” she sighs happily in one moment of unvarnished affection, repackaging “Que Sera, Sera” for millennials. 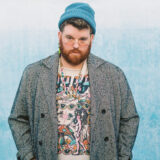 Other times, the singer-songwriter uses her honey-smothered drawl to subvert her own rollicking melodies. “Pouring salt in my sugar won’t make yours any sweeter / Pissing in my yard ain’t gonna make yours any greener,” she finger-wags on “Biscuits,” the album’s perkiest outlier. “Good Ol’ Boys Club” gets more pointed: “When did it become / About who you know / And now about how good you are?” she asks in the most obviously rhetorical question since “Do you ever feel like a plastic bag?” arranged as a tambourine-rattling kiss-off.

The album’s title track lays out a tricky dichotomy: the former Nashville Star contestant accepts that she doesn’t mesh with glitz-and-glamour popularity contests, but she also struggles to escape that conditioning entirely. “When I’m performing, I just love for the look and the world that we’re in to be this kitschy, very Western, almost tongue-in-cheek, very colorful style,” she told Cosmopolitan earlier this year. The divide is a thin one, but Musgraves toes it well. “Don’t you forget it / As big as we’re getting / This town’s too small to be mean,” she warns later on “This Town,” before unfurling her ancestral tree full of pushpins and Post-Its of dirt on each generation, connecting a web of interpersonal gossip on “Family Is Family.”

But Musgraves produces her finest songs when she squints into the sun and wonders about the future. “Dime Store Cowgirl” plants roots in humble beginnings — “You can take me out of the country / But you can’t take the country out of me,” she sings — while its banjo-plunking melody suggests an alternate route out of dodge. “Die Fun” turns a shoulder on aging, just carefree Kacey and her guitar stargazing in the backyard. “We don’t even have to come back,” she says, knowing full well she will — family is family, jagged edges and all.

Musgraves reserves her sharpest dagger for last: Album closer “Fine” is one of this century’s most brilliantly rendered takes on masking one’s own heartbreak for public consumption, following in the unconvincingly self-assuring footsteps of Biz Markie’s “Just a Friend” and John Waite’s “Missing You.” “Baby I wait… Just like I always do,” she sings, trailing off, dragging a finger across her empty king bed. There’s a pause — not to be mistaken for a conclusion — followed by a breath, dimmed lights, beachy guitars, and all of a sudden, Willie Nelson’s uncredited vocals. “Are you sure / That this is where / You want to be?” he croons, gruff and stoic as the melody slows and drowns itself in wine.Much like Same Trailer, Different Park‘s melancholic standout “It Is What It Is,” “Fine” proves that bouncing back’s not easy, but acceptance comes in due time.

At its core, Pageant Material is about how you never quite escape small-town struggles with family, neighbors and old flames, even after your big break. Last time out she sang “If I can’t bring you to my house / I’ll bring my house to you.” On her excellent second album, she brings us the whole block.

Album of the Week, Kacey Musgraves