Jukebox Jury: Martin Garrix, The DJ Who Sings Along

Martin Garrix has the energy and glimmer of a 19-year-old house enthusiast who can’t wait to get his shot at superstardom. Except that shot already came and was seized by Garrix two years ago, with the international smash “Animals” — a U.K. No. 1, with well over half a billion hits on YouTube, and one of our top ten EDM anthems of the ’10s. The producer’s star has only swelled since then, with a further string of Beatport hits (“Wizard,” “Virus”) leading to friendships with much of the world’s DJ ruling class, collaborations with superstars like Usher and Ed Sheeran, and enough dance-world ubiquity to be live-trolled by EDM watchdog Deadmau5 at 2014’s Ultra Music Festival.

This year’s Ultra belonged to Garrix, however, who debuted eight new tracks at the festival, including the Sheeran-featuring “Rewind Repeat It,” building anticpation for his imminent debut LP. “It’s in the works,” the producer says of his first full-length. “The album is going to be more real songs, song based… instead of ‘DING-DING-DING-DING!’ Of course there will be aggressive club tracks as well because people know me from that stuff, but I want to show a different side, a deeper side.”

Garrix’s onomatopoeic singing was a consistent theme as he listened along to a number of tracks of SPIN‘s choosing the week after his triumphant Ultra gig — the young DJ can’t hear a hook he recognizes without belting along, usually while providing his own air-piano accompaniment. See his reactions to songs by current associates, past influences, and, uh, the Ramones, and get excited for the days when instrumental karaoke becomes a thing. 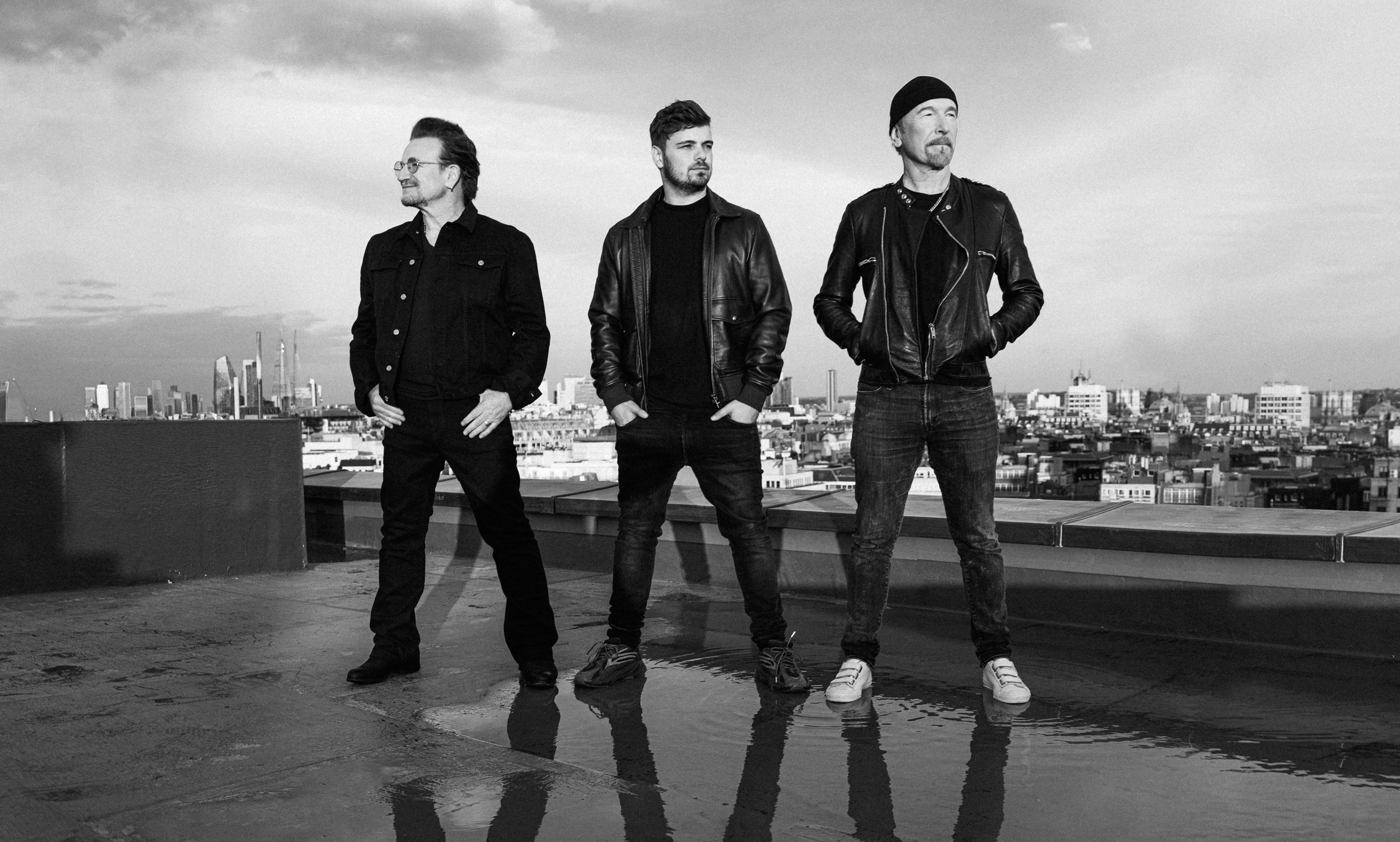 Sick. I learned to produce that kind of beat. This was one of the first songs we had to remake.

You had to remake this song?
Yeah, we would get assignments for school, like homework, so this was the first song we had to do and then it comes like a bass in here like… [Sings along with bass pulse.] Sick. I love this song.

So as a house DJ, does Daft Punk like the tower of everything?
They’ve done so much, they’ve had such a big influence in how electronic music sounds now a days. Also “Get Lucky,” it’s insane how much of an impact it had on like the entire industry.

Have you ever seen them?
I wish. I fucking wish.

Sick. I love this actually.

How did you get hooked up with Usher on your new song?
I had this idea for a track which was very melodic and I was talking to Scooter [Braun], my manager, “Who would be sick super sick to have on the track?” And like, same as this track, “Don’t Look Down” has very high [vocal] parts. So then he was like, “Let’s try Usher… don’t get your hopes up, but I can always ask him.” And then three hours later, Scooter Facetimes me and he’s like, “Yo, Usher wants to do your record!” That same week we were in the studio doing the vocals for “Don’t Look Down.”

Have you been a fan of his for a while?
I’ve been a fan, I’m still a fan. I’m a big fan. He did a track with David Guetta, I love that song. He’s brilliant really, and he’s been in the industry for so long. He’s a legend.

What’s he like in person?
He’s super nice, really humble, really smart, really chill. There is a certain vibe around him that is really relaxed, really chill.

This song is the best.

Did it irritate you that it was called “Animals,” released so close to your “Animals”?
No, not at all. I didn’t mind at all. It’s not confusing because they were released at different times. This song… [Sings along with falsetto.] I love how [the vocal] goes up, and I love Maroon 5 in general. It’s super cool. I would love to do something with his voice. He’s definitely on my “Would Love to Collaborate With” list.

Are you kind of done with “Animals” in general?
Ehhh, I’ve heard it so many times and I’m still super happy and super blown away at how big the track has gotten. But, of course, like when you hear a track a million times, it’s not like I would be like, “Oh let’s listen to ‘Animals.'” But it’s like, it happens to every song I produce. It’s not just particularly “Animals.”

Is that going to be on the album you think?
No.

Yeah, I love this kind of stuff. This stuff I would listen to at home.

Do you know this song specifically?
I’ve heard it in the clubs.

This is Fetty Wap’s track. Does hip-hop filter into your stuff at all?
Music-wise, sometimes it does. I look to this for inspiration, but I love some of the songs if I’m just in the club. If I go out with friends, I like to go to the club that plays this kind of stuff, not house stuff which I listen to all the time.

Have you ever talked about working with a rapper or anything like that, remixing one?
I’ve been in the studio in the studio with a couple once just to check how it is. Because I produce this kind of stuff but not under [the Martin Garrix name]. It’s just some stuff that I work on the side just for fun.

You have some anonymous projects going on right? Anything that’s ever going to come to the light you think?
Definitely. But I want a lot of them to break, and then it’s like…

So you want it to get popular and then you can take credit it for it after the fact?
Yeah. That would be cool.

Super sick song. This song is amazing. I played this in my set actually, a mashup. [Sings along with strings.] This song makes me happy. I love her voice. I love the bells that come later. So cool. So dope. It’s like a song that I can listen to in the morning, during the day, or when I go out as well.

Have you ever been interested in working with the more organic instrumentation, like the violins here?
Yeah. “Don’t Look Down” has real instrument — guitar, piano, bass. But I would love to do more work with real instruments. Also, because I’ve been raised in a very musical family. My sister plays violin. She sings, she plays piano. I played the Spanish guitar for eight years, like Flamenco. My dad played the guitar and my mom plays the piano, crazy Beethoven and all that stuff.

Did you ever get the Flamenco on a track?
Could be. I don’t know yet. It would be fun. I like to experiment.

This song is legendary. [Sings along with piano hook.] This song is epic. I love this song. The melody… so cool.

This was the number one song in France the day you were born. Do you listen to any ’90s trance stuff?
This stuff I know, but it’s not that I would put it on. Now I hear this again, it’s cool. It’s also cool because it has a real guitar in it. But there are also a lot of edits from this melody, a lot of reworks. This melody is super-strong. [Continues to sing along with piano hook.]

[Sings in anticipation of hook.] “WHEN LOVE TAKES O-VERRR!!” It’s great. This song is amazing. Guetta in general, what he did for the entire industry, same as Tiësto, same as Daft Punk, they paved the way for us. If Guetta didn’t exist, “Animals” would have never been played on the radio. Because of people like him and Avicii. But mainly Guetta.

So what is this story of you crashing into his dock recently with your yacht?
Yeah, we crashed our boat into his [dock.]

Is that just the sort of thing that happens all the time in the life of a superstar DJ?
No, Tiësto and I were shooting a documentary together and we wanted to say hi to David. So we went full power on the way to his dock, and we wanted to reverse, and the engine shut off and so we couldn’t brake in time because it’s like a moving object. And we hit his dock.

So did you guys have to rebuild it yourselves or pay for it?
It cost money, but at the end of the day it’s like… no one got injured, so we felt that all of us that was the most important part.

It seems like you guys were all able to laugh about afterwards?
We were. We couldn’t believe it actually happened. We got everything on video and afterward, we were like, “No way did this happen,” and laughed it off.

My parents used to listen to this. They played this kind of stuff at parties, one of their friends who had CDs of this stuff. There was no DJing, just playing in the background. I myself don’t listen to this.

You know the Ramones? They were the first big punk rockers in the U.S.
This is rock’n’roll, right?

Yeah. It’s called “Rock ‘N’ Roll High School.” What was it like doing school and also touring…?
It was weird. When “Animals” released I still had one year left in school so it was like super weird. I had number one in the U.K. and I would still go to school five days a week. They made like a schedule when I could tour and when I had to be home for tests. But my team made it happen. My parents they helped as well.

Did you get to own the school when you went back?
No, not really because everyone there is a musician.

I’m sure not all of them had U.K. No. 1 hits…
No, no, but like, I was friends with some of them before and I’m still friends with them. They also know how, if they were in my position it wouldn’t suddenly be people going up to them, “Oh I cant believe you’re doing a show.” Not that much changed.

What is it that you like about him too much?
He’s fresh, and his entire energy is super humble. It’s really cool to see an artist that big still be humble.

And he meshes well into the electronic world?
That was a cool thing, that a challenge we both had to do, to make an electronic track that fit him but also fit me. We finally found something in the middle that worked for both of us.

Deadmau5. Sick song. I love this vocal, “Raise Your Weapon.” Super sick. I love Deadmau5 as a producer, as a person. He’s super interesting. He’s very funny to follow on social media. But as a producer, he gets every single credit I can give him. He’s nuts. This track is one of my favorites, together with “Strobe,” “The Veldt”… He’s an insane producer.

Did you ever talk to him after he played “Animals” that one time on stage [mixed like “Old McDonald”]?
[Long hesitation to think.] No, not really. I spoke to him a lot before. Like two, three weeks before he did that I did an entire tour with him and we were drinking beers, it was fun.

In general you guys are cool?
Yeah, we’re not in a fight at all. He just has a very outspoken opinion on some types of music. But I definitely like this song.