Update: Janet Jackson has announced a new slew of tour dates. Those are all below. Presale begins tomorrow at 10 a.m. EST.

Update 2: Jackson has announced a third leg of her tour for Unbreakable. Find those dates at the bottom of this post.

Miss Janet Jackson — a major presence in SPIN‘s 300 Albums of the Past 30 Years list — recently announced plans to release “new music, a new world tour, a new movement” via a Vimeo video. And true to her word, Jackson has in fact unleashed a series of 36 dates. Titled the Unbreakable World Tour, Jackson’s trek, her first in four years, will kick off at the end of August and run through mid-November. See the full list on her website. 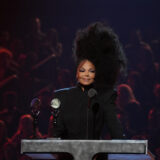 Announcement from Janet Jackson on Vimeo.