Review: HOLYCHILD Are Insolent With a Purpose on Feisty Debut, ‘The Shape of Brat Pop to Come’ 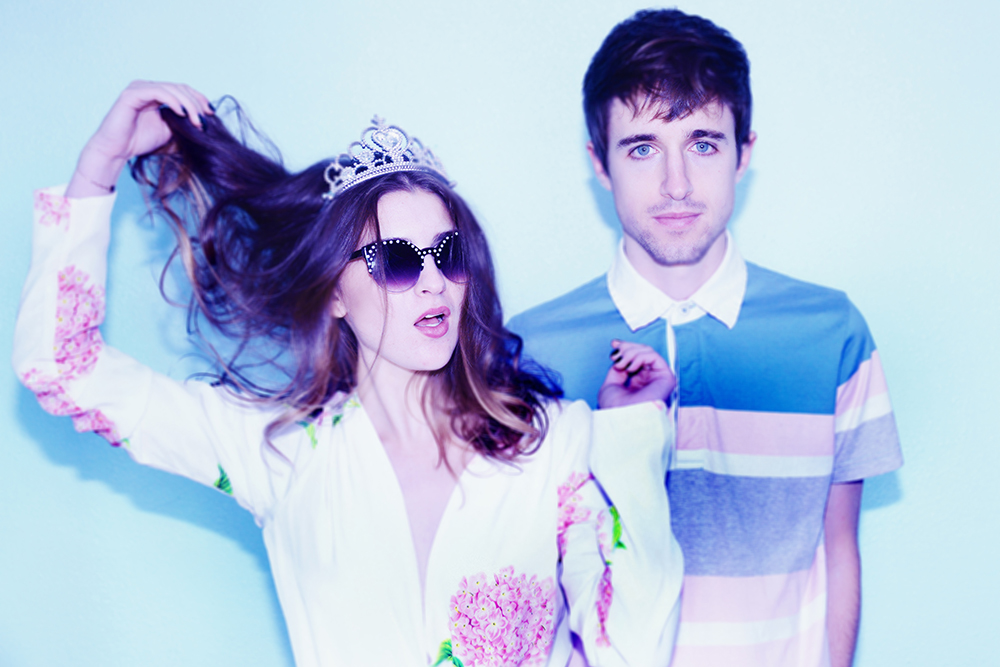 Vanity capitalization is, in almost every instance, annoying. Demands that your name must have anything but a normal array of upper and lower case letters gets old really fast, and I’m aware this is being published on SPIN. But HOLYCHILD are one of the rare cases that actually merits caps lock. The exuberant pop duo deserves to have their name shouted — after all, they are — as their splashy debut album announces — The Shape of Brat Pop to Come.

Comprised of Los Angeles residents Liz Nistico and Louie Diller, HOLYCHILD is a band with plenty to say, and given how fun it is to listen to them, it’s best heard loud. Nistico, the singer-songwriter to Diller’s multi-instrumentalist, imbibe every song on the 12-track LP with a sense of raucous urgency. Gung-ho standouts like “Plastered Smile” and “Running Behind” have a march-like pep to them, buoyed by Nistico’s infectiously sugary, almost whiny singing style. It’s an album that has plenty of momentum but never feels disposable or airy. Some of the tracks, like the booming “Tell Me How It Is,” boast heavy enough beats that you could swap Nistico’s meta-valley girl vocals for a couple bars from Killer Mike and El-P and it wouldn’t sound too out of place. Sonically, HOLYCHILD’s music bounces off the walls. Lyrically, they want to tear walls down.


The album takes a purposeful glee in ridiculing and critiquing a materialist, sexed-up, fame-thirsting society. “Money All Around” blasts wealth-worship, and the steps people will unthinkingly take to obtain it: “Give me something I can eat / I need your words / I need your power.” “Monumental Glow” sings of an unfulfilling obsession with fame — suggesting that the high pedestal upon which celebrity is placed might end up scattered in the SoCal desert like some broken Ozymandias statue. They’re holding a sarcastic mirror to the establishment in a flashy and bold manner; two insolent kids who think they know better and loudly announce what they want. Luckily, what they want is good. Whereas contemporaries like Charli XCX and Icona Pop share the same appealingly overindulged punk enthusiasm — a boisterous confidence and an “I don’t care” vibe that makes them sound exciting and rebellious — HOLYCHILD are much more skeptical of this whole “pop star” deal. They DGAF for a cause. This, more than just unabashed brazenness and obnoxious sound, is what their new ownership of “brat pop” is all about.
Despite being so infectiously thrilling and well-intentioned, The Shape of Brat Pop to Come can’t help but running up against some of the obstacles that fame-bashing pop inevitably tends to hit. How glamorous can you be while criticizing narcissism? Can you make a statement while also trying to make bank? You have to wonder how just much HOLYCHILD can change celebrity-oriented culture from the inside where they have to at least somewhat play by its rules if they strive for the same fame/fortune-oriented goals. Not that anyone should have any reason to begrudge Nistico and Diller for their increasing success (or sweet Apple gig). The pair is incredibly self-aware of how blurry the line is between satire and straight, and their intimate knowledge of the landscape is what gives a lot of their commentary its bite, even if it can only go so far.

But The Shape of Brat Pop to Come is a supremely assured opening salvo, and the title even suggests that this is only the beginning. They’re confident they can move past the inherent paradox of pop-culture critiquing pop. It’s an immensely satisfying debut and a promising portent of things (and, uh, brat pop) to come. In the meantime, it’s probably best to blast HOLYCHILD as loud as you can, keeping in mind that whenever a conflict arises, Nistico is probably singing with her tongue slightly in cheek.