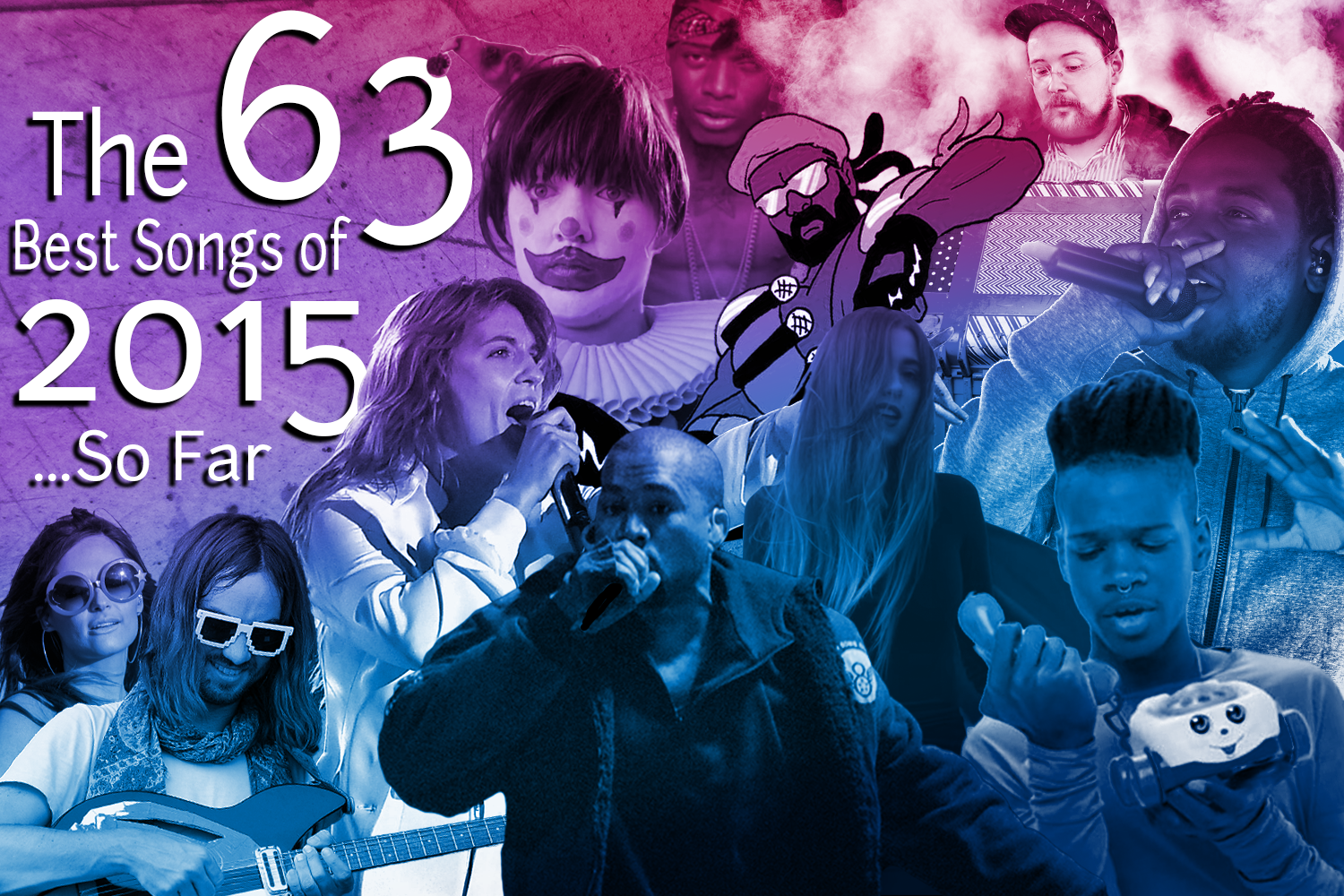 Since we said hey-what’s-up-hello to 2015, the year has taken us out to the local, brought us home tonight, made us say oh my gosh, and even made us coffee in the morning. To recap these highs and all of the other memorable moments in between, we present the 63 best songs of 2015 so far. Get your flamethrower in sky-firing position and let it happen.


The dripping homoeroticism provided all the faux-controversy, but the endlessly reverberating production and Karen Fairchild’s trembling vocal — both Twin Peaks-worthy in their retro spookiness — give this song its real electricity. — ANDREW UNTERBERGER


It’s worth remembering that this is El-P and Killer Mike’s second wind, post-Company Flow and OutKast ex-communication, respectively. So using their celebrity to nail down collaborations with indie-celeb cat Lil BUB among other things, this is the phase of their chewy careers where the pair will throw verses onto a first-rate dubstep/Diplo-pop banger, the first time in their lives they’ll be associated with the phrase “addictive hook.” “Don’t Trip” hints that maybe they’ll even Slowly Walk the Jewels and enjoy themselves. — DAN WEISS


“If I was your ex… girlfriend,” Kelela begins, before taking a breath to segue into the more important question: “Are you even breathing?” Honestly, it’s a little hard to remember to inhale while listening to the Los Angeles singer’s pained, feathery kiss-off, her verses catching in time to producer Arca’s slow-blooming bruises of trap-claps and aerated synths. — HARLEY BROWN


This English-language banger from Korean star CL proves why people should’ve been paying attention to her snapping K-Pop in recent years, the singer/rapper skipping expertly over a rattling and clanking Diplo beat. Meanwhile, RiFF RAFF shouts out Anna Kournikova and Michelle Kwan, but gets one-upped by OG Maco’s opening line: “PUT IT ON ICE LIKE THE MUSICAAAALLLS!!” — BRENNAN CARLEY

59. Tribulation, “In the Dreams of the Dead”


Tribulation’s horror-struck new album, Children of the Night, cements their hard-won status as one of modern metal’s truly innovative bands, the Swedish foursome stalking between the lines of death metal, thrash, psychedelia, and the slightest hint of black metal, with diabolical intent and vampiric grace. “In the Dreams of the Dead” is a heady graveyard romp, rife with raspy growls and eerie melodies. — KIM KELLY


Refused have risen from the punk-rock ashes, and if their first single in 17 years is proof of anything, it’s that the hardcore overlords are having a bloody good time with their rebirth. Plowing in with chugging guitars, pulverizing percussion, and house-collapsing shrieks, “Elektra” is somewhat less agenda-driven than their bone-picking, fervently anti-capitalist 1998 standard-bearer, The Shape of Punk to Come. It almost sounds like they’re having — dare we say it? — fun. — RACHEL BRODSKY


One of two songs (the other being the thick-bottomed-but-creaky “100K”) to come from enigmatic Chicago rapper (or group?) Goodbye Tomorrow. No clue who’s behind the electro-addled “Jay Z” or its mind-melting video, but for now, this glory-snatching salute to Hova — which also aims a long-distance stare at his throne — will have to do. — KYLE MCGOVERN


If there’s a group that could breathe vitality into zippered-leather-jacket, ceiling-dancing ’80s meag-pop again, it’d be Miami Horror, who deliver a gorgeously tinted, windows-down summertime song with “Love Like Mine.” — B.C.


Israeli guitarist Yonatan Gat spent the better part of six years slinging wiry riffs for the unhinged garage-rock trio Monotonix. As chaotic as that band could be, his solo output — in particular the teeth-chattering six-string work and garbled chanting on “North to South” — somehow manages to be both joyful and spastic. Gat’s never been afraid to get weird, but here he makes everything ecstatic. — COLIN JOYCE


Outlaw country’s living treasures — ages 82 and 78 respectively, the sort of ages you reach after completing a protracted prison sentence — celebrate their favorite almost-legit substance on this, ahem, joint collaboration. But that doesn’t mean they won’t miss the good old days of smuggling it into mainstream venues and dodging the cops. Still, this wish-you-well from two palookas is less “Hope I die before it gets taxed” than one big happy ¯\_(?)_/¯. — D.W.


“Today we must scream at the top of our lungs that we are brown, that we are smart!” yells Victoria Ruiz on Rhode Island punks Downtown Boys’ manifesto-like “Monster.” It’s damn near impossible not to feel a surge of righteous pride and restrained rage as the Mexican-American frontwoman gets progressively more frantic and bilingual, the song speeding toward its sax-strewn climax. — H.B.


A wistful valentine to salad days and hometown romances gone by, sealed with synths and delivered by a solo Mac McCaughan, who’s taking a breather from his day job as Superchunk’s frontman. “One foot on wet leaves / One foot on concrete / Your hand in my sleeve / Where did you go?”: Nostalgia doesn’t get much simpler or sweeter. — K.M.


Technically released in late 2014, “Uptown Funk!” has come to be the defining hit of early 2015, having crossed over to every radio format imaginable and spending more weeks of the calendar year thus far on top of the Hot 100 than not. We’re not even sick of it yet, a testament to consummate crowd-pleaser Mark Ronson’s achievement of his ultimate ambition: Entrance into the canon of “September,” “Celebration,” and “I Gotta Feeling,” jams guaranteed to be played at every wedding from now until the end of time. — A.U.