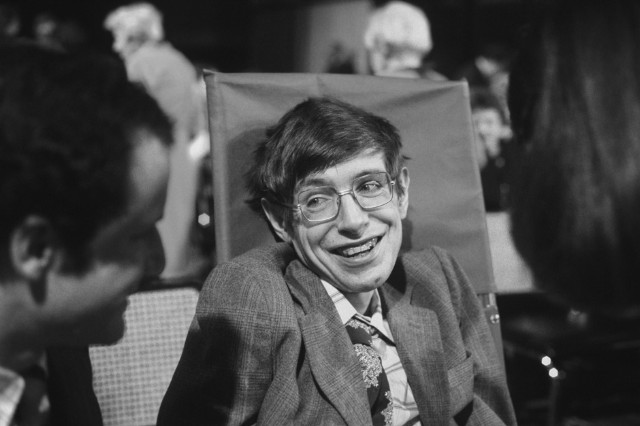 Though vastly more intelligent than the equally vast majority of us can ever hope to be, Professor Stephen Hawking is also hip and with it: the Oxford-based cosmologist clocks quite a few pop culture accomplishments, including a fictionalized bout against Einstein in the YouTube series Epic Rap Battles and not one but two guest verses on Pink Floyd albums. In honor of his just-announced appearance as entertainer at the kids’ tent at this year’s Glastonbury Festival, SPIN has gone on an intergalactic journey to bring you Hawking’s best musical moments.

More like what we need more of is MC Hawking rapping. MC Hawking’s Crib reimagines the space scientist as a beats ‘n rhymes scientist for parody tracks with names like “Fuck the Creationists” (yes, it’s a play on N.W.A.), “E=MC Hawking,” and, our own personal favorite, “The Big Bizang.” Of the site, its subject seems to enjoy it as well, telling its developer Ken Leavitt-Lawrence in a 2000 email that he was “flattered as it’s a modern-day equivalent to [the BBC show] Spitting Image. “

In 2009, John D. Boswell, a.k.a. Melodysheep, a.k.a. the man behind online video series Symphony of Science, concocted a genius mind-meld between two cosmologists, Carl Sagan and Stephen Hawking. The result is a cheesy, synthesizer-strewn odyssey that sounds like Auto-Tuning the Cosmos, that could also gently lull you to sleep on dreams of Milky Ways and nebulae nurseries.

For this year’s Record Store Day, Hawking recorded a version of Monty Python’s “Galaxy Song,” originally sung by Eric Idle for 1983’s The Meaning of Life (he also appeared in a short video clip featuring fellow physicist and professor Brian Cox filmed for a documentary about the British comedy stalwarts’ reunion shows last year). The visuals are as great — if not, honestly, perhaps better — than the song itself, featuring a rear view of Hawking soaring through the universe, interspersed with beloved clips from Monty Python.

Pink Floyd celebrated the tenth anniversary of Hawking’s roboticized appearance on 1994’s “Keep Talking” — for the memorable verses “For millions of years mankind lived just like the animals / Then something happened which unleashed the power of our imagination / We learned to talk” and “It doesn’t have to be like this / All we need to do is make sure we keep talking” — by enlisting him again for (non-sequel) “Talkin’ Hawkin” on their latest album, last year’s The Endless River.

Count on Hawking to combine science and boy bands for some very sweet (and scientific) advice to One Direction fans still bereft over Zayn Malik’s departure from the group. During his hologram lecture at the Sydney Opera House in April, Hawking addressed a audience member who asked about the more universe-wide implications of the former 1D member’s decision:

Finally, a question about something important… My advice to any heartbroken young girl is to pay close attention to the study of theoretical physics, because one day there may well be proof of multiple universes. It would not be beyond the realms of possibility that somewhere outside of our own universe lies another different universe. And in that universe, Zayn is still in One Direction… This girl [in the audience] may like to know that in another possible universe, she and Zayn are happily married.