With new albums flying at us left and right in a DIY age where anything you doodle on your laptop could become tomorrow’s viral hit, plenty of great stuff still falls between the cracks even for music journalists. Here’s the amazing music we’ve been waiting to tell you about ever since we first discovered it: bedroom power-pop revivals and indie spins on campfire folk, dark electronics, textured French pop, and hippie-hating literary punk. These are the other records that SPIN loved this month.

Young Guv, Ripe 4 Luv (Slumberland)
This is where Fucked Up guitarist Ben Cook frees himself from the constraints of Damian Abraham’s one-track bellow to bestow upon us indie-rock’s greatest — and possibly only — tribute to Marshall Crenshaw, “Crawling Back to You,” as well as ones for some other singers whom you can actually notate. These include Nick Gilder (“Ripe 4 Luv”), Wreckless Eric (“Crushing Sensation”) and uh, Steely Dan’s Donald Fagen (“Wrong Crowd”). “Dear Drew” wisely resuscitates the shuffling “Ballroom Blitz” beat because, until Jet reunites anyway, it can’t be overused enough. But what elevates Ripe 4 Luv beyond four absolute bangers and four darn-good in-betweens is how it uncovers the creepiness of power pop relationship dynamics, literally on standout “Kelly, I’m Not a Creep” and, in the multi-tracked loneliness Cook’s filtered falsetto, the inherent unhealthiness of crawling back to whomever. He’s been hanging with the wrong crowd, and he’s ready to move on — over E-Z listening bass slaps. — DAN WEISS 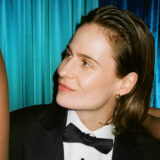 Lord Huron, Strange Trails (IAMSOUND)
A solid seven years ago, Lord Huron‘s sophomore album might’ve broke the bank a little bit, but now, the Los Angeles troubadours’ particular brand of ensemble indie-folk (Fleet Foxes, My Morning Jacket, M. Ward) has faded into the cultural outfield. But here’s why trends are dumb: Lord Huron‘s Strange Trails is enchanting from start to finish. A lush collection of guitar-and-bass-led rootsy-tootsy ballads, the record is in head-over-heels with both nature (thus the title) and also infatuation itself. Lead singer Ben Schneider invokes the elements on the handclap-laden “Hurricane” (“I get a thrill outta playing with fire / ‘Cause you hold your life when you hold that flame”), faces his fears by likening them to a remote forest in “Meet Me in the Woods,” and sings love’s praises in the too-on-the-nose but addictively upbeat bouncer “Fool for Love,” which effectively puts the “spring” in “Springsteen.” Pulling a Bon Iver-gone-to-Walden Pond move might be grossly overdone by now, but Lord Huron has skillfully overturned the tired mulch in favor of tuneful new growth. — RACHEL BRODSKY

Lonelady, Hinterland (Warp)
For a release on Warp records — long the U.K.’s preeminent purveyors of the bleepiest and bloopiest of electronic music — Lonelady‘s second album is almost jarring in its gleefully old-school approach to grooving it out. When any of Hinterland‘s nine disco-punk tracks gets in the pocket, the bass, guitar, and drums could run out for a half-hour, remaining insistent in their funk without breaking stride or sagging in momentum. Only the outfit’s titular frontwoman (slash exercise class leader) serves to break the trance, barking out instructions and making sure everyone is keeping their backs up off the wall. If this is indeed “Bunkerpop,” last one in the foxhole’s a rotten egg. — ANDREW UNTERBERGER

Shlohmo, Dark Red (True Panther / WeDidIt)
Dark Red is exactly what the title implies. Los Angeles producer Shlohmo, a.k.a. Henry Laufer, takes a dark turn down the River Styx with his fourth LP. It’s a distorted, downtempo meander that veers between skittering breakbeats on “Meet Ur Maker” (another fittingly macabre caption), ominously veiled clicks/clacks on “Emerge From Smoke,” and welcome rays of light in the samples of wind chimes and running water on “Beams.” Part of L.A.’s underground WeDidIt Collective — along with beatmakers and hip-hop heads R.L. Grime and Salva — Laufer flushes out the dark corners of last year’s blushingly sexy No More EP with velvet-voiced rapper Jeremih, turning it into his most ambitious and cinematic album yet.  — HARLEY BROWN

The Paranoid Style, Rock & Roll Just Can’t Recall EP (Battle Worldwide)
It’s a blessing and a curse that Timothy Bracy forms bands with his romantic partners, which live and die with the relationship — rest in peace the Mendoza Line, and here’s hoping with the Paranoid Style, whose 2015 EP is some of the smartest rip-and-roar you’ll hear in a season mostly notable for its plethora of excellent releases by hungry rappers. Elizabeth Nelson Bracy’s a wordsmith too, the kind who names her band after a 1964 political essay. Her arch delivery echoes Sally Timms of the Mekons, a band the Bracys love, with the twang bled out and guitars churnt up, especially on “Bound to Be Vacant,” the sub-two-minute highlight of this 15-minute manifesto/eyeroll, followed by a four-way tie that includes the inescapable hook of “National Sunday Law” and a cover of the obscure “Master Jack,” by Four Jacks and a Jill, whom you might remember from a tiny reference in This Is Spinal Tap. Despite the cautionary title, they recall plenty, and they rock’n’roll too. If they knew any more, we’d have to kill them. — DAN WEISS

Christine and the Queens, Saint Claude EP (Neon Gold / Atlantic / Because)
The 26-year-old French Canadian born Héloïse Letissier exploded virtually overnight with her debut U.S. release, a coiled, intensely focused batch of English-sung tunes for the first time in her career. “iT” scrapes her voice to its rawest components as she stands atop a fresh victory, attempting to convince herself that her conquest is a worthy one: “‘Cause I won / I’m the man now / And I got it / I’m the man now,” Christine bellows over and over, offering a compelling gender-blurring portrait at a time when such an issue has taken the mainstream news cycle by (rightful) storm. “Tilted (Christine)” see-saws between French and English as trilling pianos give way underneath the weight of jagged synthesizers. Christine and the Queens may be but one person, but her EP is a masterclass in orchestral layering and attention-grabbing lyricism.— BRENNAN CARLEY

Toro y Moi, What For? (Carpark)
After funneling the fancy footwork he introduced on his last record, the slick and lounge-y Anything in Return, into his more explicitly dance-oriented Les Sins side project, Chaz Bundick has returned to his more stylistically-varied roots on What For? It’s a little shocking at first — the limber, liberal use of the whammy bar, skuzzy guitar licks, and fuzzed-out solos — but it doesn’t take much time to lean into this (somewhat) new iteration of Toro Y Moi’s endlessly adaptable grooves like a head massage. “Empty Nesters” buoys Bundick’s gentle high pitch with a bright melody shot through with insane little keyboard squeals, while “Spell It Out” goes for Chic-lite with a disco beat and the barest background squonk. It’s hard to remember he was once known primarily as a co-founder of chillwave once you’ve emerged dripping from the warm bath of What For? — HARLEY BROWN