Welcome to SPIN‘s Singles Mix! SPIN staffers have rounded up their favorite, must-hear tracks for your personal playlists. Collecting the finest from Jersey indie-punks, smooth-singing R&B stars, Brooklyn jangle-pop trios, and more, these are the songs you need to know right now.

Alessia, “Here” (Def Jam)
Eighteen-year-old newcomer Alessia Cara’s fit within Toronto’s impressive reserves of R&B talent is as smooth as her silky voice. Against expensive-sounding samples of Isaac Hayes’ velvet-voiced echoes from “Help Me Laugh,” and the sumptuous strings from his “Ike’s Rap II” (previously sampled in Portishead’s “Glory Box,” among others), Cara sings about the surprisingly mundane: being an awkward teenager at a party with people “who don’t even care about my well-being.” It’s a richly textured vignette made all the more vibrant with her understated warble and simple, one-word chorus that makes the listener want to be “here” in the corner with her. — HARLEY BROWN 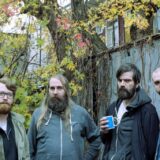 Kölsch, “DerDieDas” (Kompakt)
Boasting more hisses, rattles and bleeps than a house remix of a Ben Frost droner, “DerDieDas” respirates like few other dance tracks this year, pulsating with wheezing, hiccuping life in every synth growl and skittering beat. For such an evocative track, kudos to Kompakt Records producer Kölsch for sticking it the most ambiguous title possible — for those who skipped out on middle-school German, “DerDieDas” Babelfishes as “TheTheThe.” — ANDREW UNTERBERGER

Miguel feat. Wale, “Coffee (Fucking)” (42 West)
Miguel knows how life works: “Gunplay turns into pillow talk” and leads all the way to coffee in the morning, and the parenthetical subtitle’s there for those who missed the wink. But it’s not just “fucking, it’s wanting to watch her sleep and smell her hair, and other honest domestic fantasies that might sound creepy if he wasn’t so earnest. This is a knowing sex fiend who doesn’t pretend that the deeply trusting intimacy of a line like “Tell me that the pussy is mine” would work on a one-night stand. — DAN WEISS

Noonie Bao, “I’m in Love” (Self-Released)
One of pop’s most notable trends as of late is songwriters stepping out from behind the scenes to take the mic on their own. Charli XCX — largely known for co-penning Icona Pop’s smash “I Love It” – did it with her own crossover smashes in 2014, and this year could very see Noonie Bao, a Charli collaborator who’s quietly been building up a pile of stellar solo material all her own, make the same leap. Her new single, “I’m In Love,” is a distinctly Swedish piece of pop that layers Bao’s pitched-up vocals atop each other in a weirdly PC Music-gone-gospel chorus. The song’s video is equally as off-kilter. Don’t miss either. — BRENNAN CARLEY

Super Duper, “Angela” (Self-Released)
Enthusiastically named Nashville producer Super Duper’s new track is fittingly exhilarating, stacking cascading layers of glorious, upbeat synths. “Angela” is jittery electronic gospel, effortlessly going back and forth between frantic highs and quieter lulls that allow for a little reflection. When Super Duper uploaded the track to his SoundCloud, he said it was “a little something for the wifey.” Pretty nice gift, if you ask us. — JAMES GREBEY

Tech N9ne featuring Eminem & Krizz Kaliko, “Speedom (WWC2)” (Juggernaut Sound)
Tech N9ne is speed-rap’s reigning Michael Jordan, an astounding technician and performer of physical feats and impossible rhythms-inside-rhythms where what he’s saying is a blur and how he’s saying it is ballet. On “Speedom” he vows to never slow down, but he meets his match in Slim Shady (who owed Tech one for biting his stuttering machine-gun flow on “Rap God”). On Eminem’s most on-fire verse in some time (and possibly his most rhythmically dazzling ever), he zips away like a scratched turntable and threatens to “jump in front of a runaway locomotive.” Even his killing fantasies are regaining their sense of play: “Murder you on a song / And then I’ll just say I was with Dr. Dre and Robert Blake eating lobster, steak and coffee cake at a restaurant with Drake.” Speedom is a road seldom traveled by the multitude (without losing their breath). — D.W.

Titus Andronicus, “Dimed Out” (Merge)
Patrick Stickles’ Jersey-punk project has leapt back into the pit after 2012’s Local Business with this furious, mush-mouthed anthem. “I only like it when it’s dimed out,” they righteously declare against a thundering beat, letting the listener know that they still won’t settle for anything less than incendiary. — RACHEL BRODSKY