Santi White, a.k.a. Santigold, promised that her new album is coming “so soon” at a packed performance at Brooklyn’s Music Hall of Williamsburg on Thursday night. The show, part of the Steve Madden Music Series, was the genre-defying artist’s first U.S. performance in more than two years.

On a much smaller stage than she is accustomed to (her last New York City show was July 2013 at the now defunct Roseland Ballroom), Santigold wore shorts, white high-tops, a sheer trench coat, shades, and a white hat that looked like one of those paper Colonial numbers kids used to make in second grade. She performed without a band, backed by a DJ and her ever-present SG1 Dancers, famous for stealing the show by wiggling like electrocuted bodies and suddenly popping onto their hands, kicking wildly into the air.

Santigold didn’t play any new material but covered a good portion of her discography (which amounts to two full-length studio albums – 2008’s debut, Santogold, and 2012’s Master of My Make-Believe). Every person in the place was lulled into dancing during the romping “Say Aha” as the shade-clad SGI ladies sporting their trademark poker faces seamlessly swapped their synchronized fist-pumping for a high-speed Irish step dance and Santi intermittently joined in without missing a beat. She played a sample of her M.I.A. collaboration “Get it Up,” then launched into a thundering rendition of the rarely performed “My Superman.”

#Santigold killed it! Props to #stevemaddenmusic for putting on such an intimate show experience w/ a great artist. pic.twitter.com/b2mB11Cub3

Last August, Santigold’s Website announced that she was in the studio recording a new album and last night she told the crowd, “my new album is pretty much done.” She added, “This is like my second show since having a baby. I forgot I have to be in a lot better shape.”

The 38-year-old Brooklyn dweller, who originally hails from Philadelphia and who gave birth to her first child, Radek, last spring, then unleashed energetic renditions of “Pirate in the Water” and “Disparate Youth.” She let the SG1 girls take over for display of impressive acrobatics during “Look at These Hoes” and then incited a loud showing of neighborhood pride as everyone sang along to “Brooklyn we go hard…” in the classic “Shove It.”

The climax came with a lip sync battle, in which Santi invited audience members to partake, politely selecting a couple of enthusiastic hand raisers as others nominated themselves by crawling onto the stage. The participants broke off into pairs: the first battle took place between a chubby white guy who kept trying to rub his butt on Santi and a huge dude with an Afro who also didn’t know the lyrics to “Unstoppable” but did a charismatic job of faking it. Next came two women, both of whom appeared to be long-standing fans and knew all the words to “Lights Out,” but one of which was the obvious standout, whipping her half-shaved, half corn-rowed head around and sprinting across the stage. Paying close attention to the proceedings, Santi deservedly proclaimed this woman the winner, easily beating out the last two — a pair of sad white hipsters who were so terrible they actually drummed up an onslaught of boos and caused the SG1 dancers to gently pull them aside Vaudeville-style, using Santi’s gold cape as a hook.

The battle winner’s prize was to lip sync alongside Santi during “Creator,” as the frontwoman invited about 40 more audience members on stage for the final dance off. She wrapped up by saying, “I will have an album out this year, I promise. We will be back so soon.” 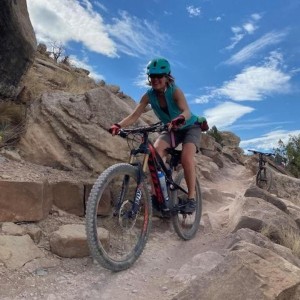