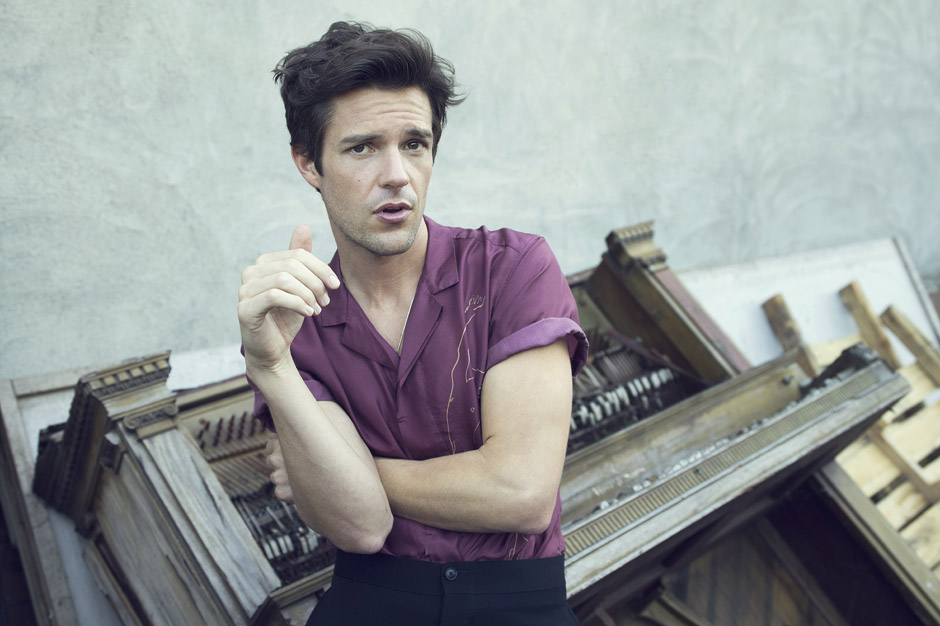 Comparisons to Springsteen mattered a few years ago, but the truth is clearer in 2015: Brandon Flowers is our Stevie Nicks. “Mr. Brightside,” “Can’t Deny My Love” — his songs depict the frazzled states of guys who hover at the edge of 17. He loves driving in the rain and girls in white. Synths billow like clouds from smoke machines. Hosannas and howlers clog every verse. He wears fabulous scarves. He carries a bag of his hair shavings, a consequence of following mentor Neil Tennant’s advice. His second solo album, The Desired Effect, has more stories about the small-town boy, but because that title was taken, he likens himself to a citizen of “Lonely Town,” hanging on to the end of this rope, somewhere on the outskirts of hope.

The one that samples Bronski Beat is called “I Can Change,” and over those familiar sequencer chords, Flowers vows to bend, break, shift, and shake, anything, anything to get you, girl. Flowers portrays a pipsqueak from Nowheresville who wants his songs to be as huge as his confusion. But The Desired Effect succeeds more often than not, goosed by the possibility that its gleaming, Ariel Rechtshaid-produced surfaces might attract radio programmers besotted with Avicii.

As one of the last new bands whose debut shipped triple platinum before the biz went kerplooey, the Killers exploited any hint of sexual ambivalence, often unable to reconcile singing at the Met versus playing at the Meadowlands. The Desired Effect sports a couple of horrors reminiscent of the band’s mustache-and-bolo-tie period: Opener “Dreams Come True” has horns and finds Flowers bellowing like a carnival barker about fleas and dogs; the guitar peals of “Untangled Love” go for the Loverboy casino circuit dough. On the other hand, “Diggin’ Up the Heart” gives the War on Drugs what-for in the nervous electro-rockabilly department, despite Flowers’ accent — admit it, Yosemite Sam fronting the Stray Cats sounds delicious, darling. Late-minted career peak “Can’t Deny Your Love” ascends new heights of ridiculousness, treating a Fairlight as if it were a tuba and leading background vocalists through an improvised cha-cha-cha.

It’s a pity that Flowers won’t just record a dance record; I suspect he thinks its “anonymity” represents a surrender of sorts (he still likes ’80s U2). The beats are there if he wants them. Now that he’s sampled Bronski Beat he should rehire Stuart Price for true throb n’ moan. Also, his newfound interest in momentum applies handrails to his unsteady falsetto. If he would only listen to Neil Tennant more: dance music, the ideal channel for his rococo fantasies, can set his night afire. We need more purple prose about imprisonment in small towns. We need batshit DOR. The Desired Effect is another gingerly step into the present, Flowers’ present. No one knows how he feels or what he says until you read between his lines.