"We are probably the most organized, responsible act in hip-hop" 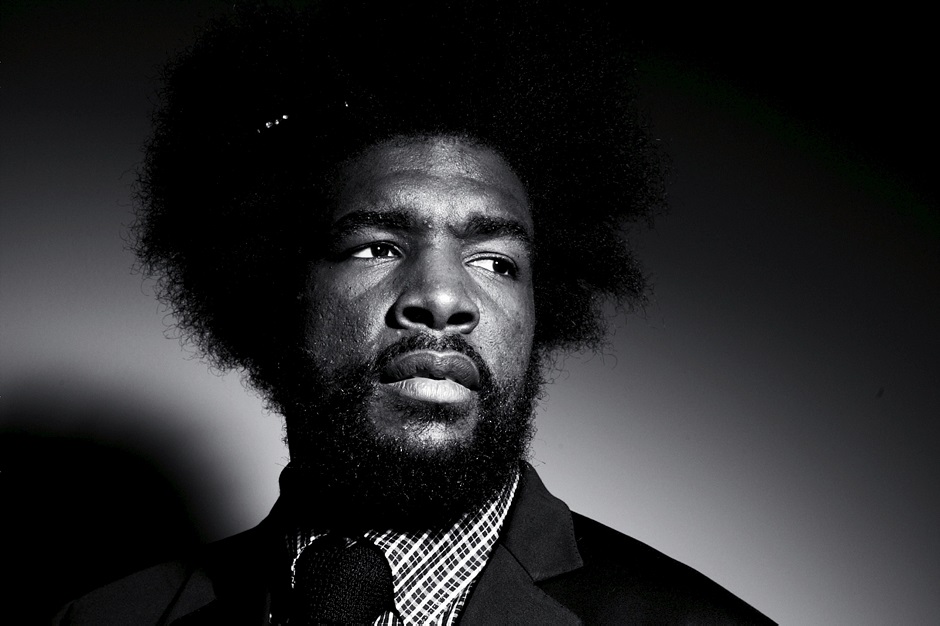 A man who truly needs no introduction, Philly-born 44-year-old Ahmir “?uestlove” Thompson is one of the most famous drummers in the world and certainly the most famous in hip-hop itself. Along with rapper Black Thought and a cavalcade of expert sidemen, his group the Roots are critically-acclaimed mainstays (2008’s dark and clangorous Rising Down was chosen as one of SPIN’s 300 favorite albums of the last 30 years) who’ve released about as many quality albums as say, Jay Z (1999’s stark Things Fall Apart, 2002’s vastly experimental Phrenology, and 2010’s panic-stricken How I Got Over also being special highlights of a thoughtful career).

And Thompson is known for backing greats including D’Angelo (especially on the classic Voodoo) and Jigga himself (for a truly underrated MTV Unplugged episode/album). When the Roots became the house band on Late Night With Jimmy Fallon in 2009 is really when he was cemented as the guy who knows and has played with everyone, which was subsequently reflected by his memoir, Mo’ Meta Blues.

But among his dozens of other projects, Thompson has also curated the annual Roots Picnic in Philadelphia since 2007, which the group also traditionally headlines. This year the festival is on May 30 and features such heavy-hitters as A$AP Rocky and Rae Sremmurd, with Phantogram, Hiatus Kaiyote, DJ Mustard, and the Weeknd rounding out the lineup alongside legends like Afrika Bambaataa and Erykah Badu (who will also be backed by the Roots). SPIN spoke to Thompson over the phone about what to expect this year.

Did you have any idea the Roots Picnic would reach its eighth year?
My idea was it was going to be a nice little one-off, and then when LiveNation was like, “Let’s have a sequel,” then it was like “Wow, is this a recurring thing?”

It won’t feel like a thing until the Roots don’t have to appear themselves, but you know. [Laughs.] That will be years from now. Philly is just such a nightmare of a territory because we know everybody in that city.

I mean, we are probably the most organized, responsible act in hip-hop and people don’t believe me but we plan out the next year’s Picnic three months after the Picnic has ended. Usually, this is how you have to do business. You have to plan stuff eight months in advance. Usually, September is the wishlist time and then October is [putting out] feelers and by November we will have hard answers and offers concerning who can participate, and then that way, come February, I can announce it. It’s always during the time that I announce it that people ask, “Can I get on? Can I get on??”

This year we added a third tent, a DJ tent. That’s official so now we’ll have three stages. So it’s probably this is our biggest year and it’s our fastest seller.

Speaking of that DJ tent, what do think of Win Butler’s DJ skills?
Oh Windows? I didn’t believe it at first. [Laughs.] At first I thought that [DJ Windows 98] was the craziest, most ironic name that I’ve ever heard. My manager put me onto it and sent me some clips. So I’m with it. I hope it’s a hit with the people.

I always loved the fact that at your festival the rock band tends to be the odd one out — like Phantogram this year — because alt-rock festivals used to have a token rap act or two and it kind of flips the tables on that.
Well, I think that as each year goes by, it’s kind of blurred lines. If you really look at it, the oddball out in this whole lineup are the Roots.

You think so?
Yeah, I mean, there is acts with experience — Afrika Bambaataa has some years [on him] and Erykah has some years in there. I feel like the alt act or the rap act on the alt-festival token spot is more or less like the older acts, acts that had albums in the ’90s. I feel like we purposely wanted to make it younger just that so we can really plan an exit strategy. Really, the whole plan is to throw Roots Picnics everywhere. We just stayed in Philly, you know, our hometown. Keep the training wheels on, but eventually, ten years from now, I don’t want to have to be at the festival. I still want to throw it but we have so many other projects to do this year, that I would love for the day to come that it just runs on its own.

Afrika Bambaataa was a huge surprise at first, but you kind of see rap and EDM coming full circle together, and I guess Bambaataa’s like the great, great grandfather of that.
I think people look at my history and some could misconstrue it as being a little too overly earnest, so I’m always careful when trying to have an educational moment. I think by example, the one thing missing between all the generations is just variety, you know what I mean? I don’t mean like the token inclusion of one rap act in that thing, but a little variety. I mean [Philadelphia DJ] King Britt, thanks to the work that Disclosure and all those other cats are doing by bringing real Detroit house and Chicago house back, I figured this is a really great chance for Philadelphia to really get familiar with the proprietor of the person that really, really had a big hand in electronic music, like people really don’t know.

I was never sure how big Britt was outside of Philly, but his name has been huge locally for years and years.
Oftentimes people just say “Millennials don’t want to know,” but you’ve got to understand that there is more information available than ever before, so it’s overwhelming. When I was a teenager and a young adult there really wasn’t that much information, so a lot of things were easier to grasp. But when I go record shopping in Pittsburgh or Amoeba, like if I’m really, really [digging] on Record Store Day, I make sure a group’s name is never after the letter E. Because the way that I shop, it’s a miracle if I get past the [sections for] C or D — especially in the record shops I go to that have like have at least 100,000 records in them. There’s just so much information to process.

What Picnic acts this year do you most want people to notice more than they already do?
I hope that Hudson [Mohawke] makes an impression on the crowd. That guy, he’s real passionate about his sets. I did a gig with Hudson once and he was so mad that the audience was ignorant to what they were listening to, that he just played four Anita Baker songs in a row, gave the crowd the middle finger, and walked off. [Laughs.]

I know for reggae enthusiasts it’s about dancehall, and as far as roots reggae and Marley and classic ’70s reggae, I feel like Chronixx really fits. He has a really awesome presence and I want him to make an impression. But I’ve been fighting three years in a row to get Hiatus Kaiyote on the show. Normally, I don’t personally show up to Roots Picnics until exactly four minutes before we go onstage. That’s how hectic it is. Like I’ll stay in my cubbyhole where it’s safe and everybody’s all “Where’s Ahmir? Where’s Ahmir? Where ?uest at? I’m his cousin.”

But I might have to just break — well actually twice, my sister’s performing. She rapped with us at Carnegie Hall when we did the David Byrne Talking Heads Tribute. She’s a really incredible performer so I’m probably going to go early and watch her perform. And I really want to see what trick Hiatus Kaiyote have up their sleeve. They’re just super creative.

What other acts have you failed to book after trying for years?
I think Angel [Deradoorian], when she was with the Dirty Projectors — that’s another act too. Each June it’s frustrating because, well, their drummer was actually a student at the University of Penn, but he was graduating the first year I tried to book them, and then they were on tour the next time, so I couldn’t get them. I will say that it was a miracle that Hiatus Kaiyote was available and were going to be in the States. I mean, I’ve been championing them so hard but let’s see. I know they have something up their sleeve.

Are there any other surprises we should expect?
No, we start on time and people always get mad because the average fans typically think, “I don’t want to see none of these other acts so let’s wait till A$AP Rocky comes on.” Then they miss the special stuff. I remember one year New Kids on the Block just happened to be in the hotel next door to the festival grounds and they were about to get on their tour bus and we were like, “Yo, come hang,” and we literally opened up the Roots Picnic with New Kids on the Block and the Roots together, and we played to, like, 80 people, the diehards that were out there front and center. That’s the type of festival it is, where anything can happen, and I’m probably going to DJ in the DJ tent as well. Watch out 98.