HOLYCHILD: Brat Pop for the Masses

Home » New Music » All Eyes On » HOLYCHILD: Brat Pop for the Masses

It’s not exactly hard to spot HOLYCHILD in a cafe on Manhattan’s Lower East Side. Chances are they’re the ones wearing the leather jackets in 70-degree weather — one golden with feathered wings on the shoulders, the other black and studded with dozens of glued-on plastic eyeballs. Lucky guess: the rockstar-chic duo are indeed Louie Diller and Liz Nistico, respectively, co-founders of the aforementioned, all-caps pop outfit.

If HOLYCHILD don’t become the biggest radio-topping duo in North America, it won’t be for a lack of trying. Their thirst for Top 40 glory glows not just in the way they dress, but in their overall commitment to branding and their self-aware (without being self-conscious) sense of chutzpah. You don’t call your debut LP The Shape of Brat Pop to Come (out this June on Glassnote) just because you’re a fan of Ornette Coleman and Refused — which Nistico and Diller are, by the way — unless you’re also pretty damn sure your prediction is going to be borne out historically.

So what of “brat pop,” then, the self-ascribed genre that HOLYCHILD didn’t quite invent — Madonna is an obvious and acknowledged progenitor — but are certainly hoping to make their own? At first blush, the descriptor seems more sonic than anything else: The pair’s 12-track debut LP bounces off the walls with ping-ponging rhythms and sugar-rush hooks, Nistico’s opera-trained vocals often pinched to an insolent sneer. The sarcastic chants of “Nasty Girls” (“Liposuction’s really in!“) could be transported from an old Daphne & Celeste single, and the dismissive chorus of closer “U Make Me Sick” sounds like a two-pronged Icona Pop excoriation. 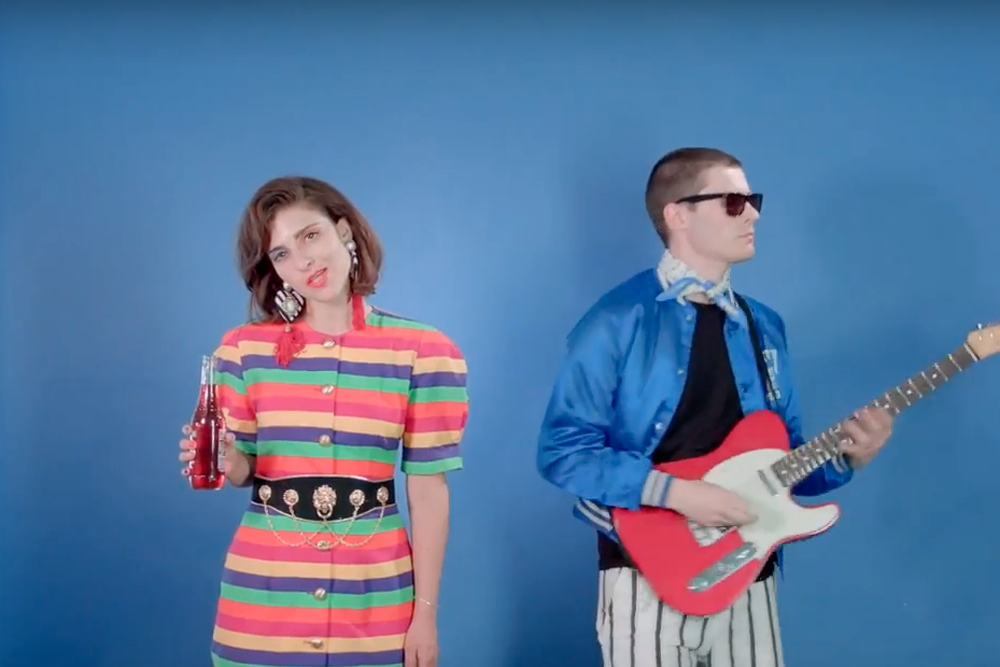 Ask Nistico and Diller about it, though, and their explanation of “brat pop” leans political. “It’s social commentary on the state of gender roles and expectations, and money, beauty, fame, narcissism in our culture, and how that relates to general relationships,” Nistico elaborates. “The lyrics are just open journal entries, like, ‘What the f—k? How can I be a human, when I don’t want to be a human in this society?'”

The thematic bent of HOLYCHILD was inspired early on by Nistico’s experiences in Los Angeles, where she moved with Diller — the two met as students at George Washington University, where he was the musical accompanist to her dance class, and the they first bonded over a shared love of Radiohead — following a long period of wanderlust (“I hadn’t lived in the same place for more than two months for the past seven years,” Nistico explains). Primarily an East Coaster by nature, the singer was shocked by the vapidity of West Coast life.

“I feel like New York, if you’ve got wit you can make it here. If you’re on your s—t and fast, you’re good,” she says of the differing coastal value systems. “But in L.A., you definitely have to look good, and then you’ll be taken seriously. That was the first time I ever encountered that, and I was like, ‘This is f—ked up and weird and creepy and it makes me upset.'” That disillusionment fueled the twosome’s first EP, 2014’s Mindspeak, and can still be heard in the anti-objectification, anti-materialist leanings of Shape tracks like “Barbie Nation” and “Money All Around.”

Whatever Nistico and Diller’s message, it probably wouldn’t land if the songs on Shape weren’t as strong as they are across the board. Dizzying in their musical scope — dancehall, punk, soul, new wave and hip-hop all get filtered into the group’s vision at one point or another — the album’s dozen tracks are as infectious and invigorating as anything in modern pop, mainstream or underground. The duo gently resists musical comparisons to another arguable brat-pop purveyor in Charli XCX, but it wouldn’t be shocking if a single like “Running Behind” or “Happy With Me” enjoyed “Boom Clap”-level crossover success.

Unlike many pop/rock pairs who write and record everything themselves in the studio (Sleigh Bells, Ting Tings), Nistico and Diller have no qualms about expanding to a full band for concerts — including on their current spring tour in support of synth-pop stars Passion Pit — blowing out to a six-piece that includes two multi-instrumentalists (one of whom, Sam Stewart, is connected through his father to another off-center pop duo of considerable ambition) and a pair of backing vocalists. Just about everyone sings, though, and just about everyone plays the drums. “I just feel like our music basically boils down to drums and vocals,” Diller explains.

While HOLYCHILD’s fanbase is an intimate but growing one (“They’ve been calling themselves ‘Brats.’ They’re like, ‘I’m the Number One Brat,’ or whatever,” an impressed Diller relates of the pair’s social-media following), whether they can take the next step into mainstream pop stardom remains to be seen. But as always, Nistico and Diller seem to have the confidence that the world is ready for the brat-pop takeover. “I think we would like to infiltrate pop culture, and reach as many people as we can all over the world,” Diller says of their career goals. “I feel like the time is now,” the frontwoman agrees. “People want to be talking about things and change something, you know?”