Holy Ghost!’s Alex Frankel jokes that the Brooklyn dance duo’s extensive remix collection Work for Hire (self-released May 5) is just an “OCD” move to consolidate random tracks kicking around on Spotify, Soundcloud, and elsewhere online, but it’s also in some ways the band’s greatest hits compilation. “There’s not one remix we don’t like,” he tells SPIN at Holy Ghost!’s basement studio in Bushwick, where he and bandmate Nick Millhiser are hammering out the first sounds for their forthcoming third LP. “But there are certainly original songs where we’re like, ‘Ehhh.‘”

Millhiser notes with pride that legendary French producer Philippe Zdar told the duo personally that he admires the hi-hats skittering at dizzying speeds through their remix of onetime psych-rock wunderkinds MGMT’s “Of Moons, Birds, & Monsters.” But like several of the 20 remixes found on Work for Hire — there are many, like the pair’s rework of Mark Ronson’s “Uptown Funk,” that didn’t make the cut because of major label legalities and budget constraints — the MGMT one almost didn’t happen.

“They sent us six separate DVDs of their actual ProTools studio sessions,” says Millhiser. Adds Frankel, “They had obviously written it on a 92-channel board at a real studio, and we’re trying to open that up in a bedroom in Brooklyn on an old Mac. It was a disaster. There are nine fucking background falsettos tucked in.”

Nonetheless, making that remix alone has informed Holy Ghost!’s own process as a band; for example, they learned that stacking 20 out-of-tune vocal tracks works wonders. “Individually, the vocals sound borderline bad,” says Millhiser, “but together they sound amazing. It’s a testament to the band and mixer Dave Fridmann.” 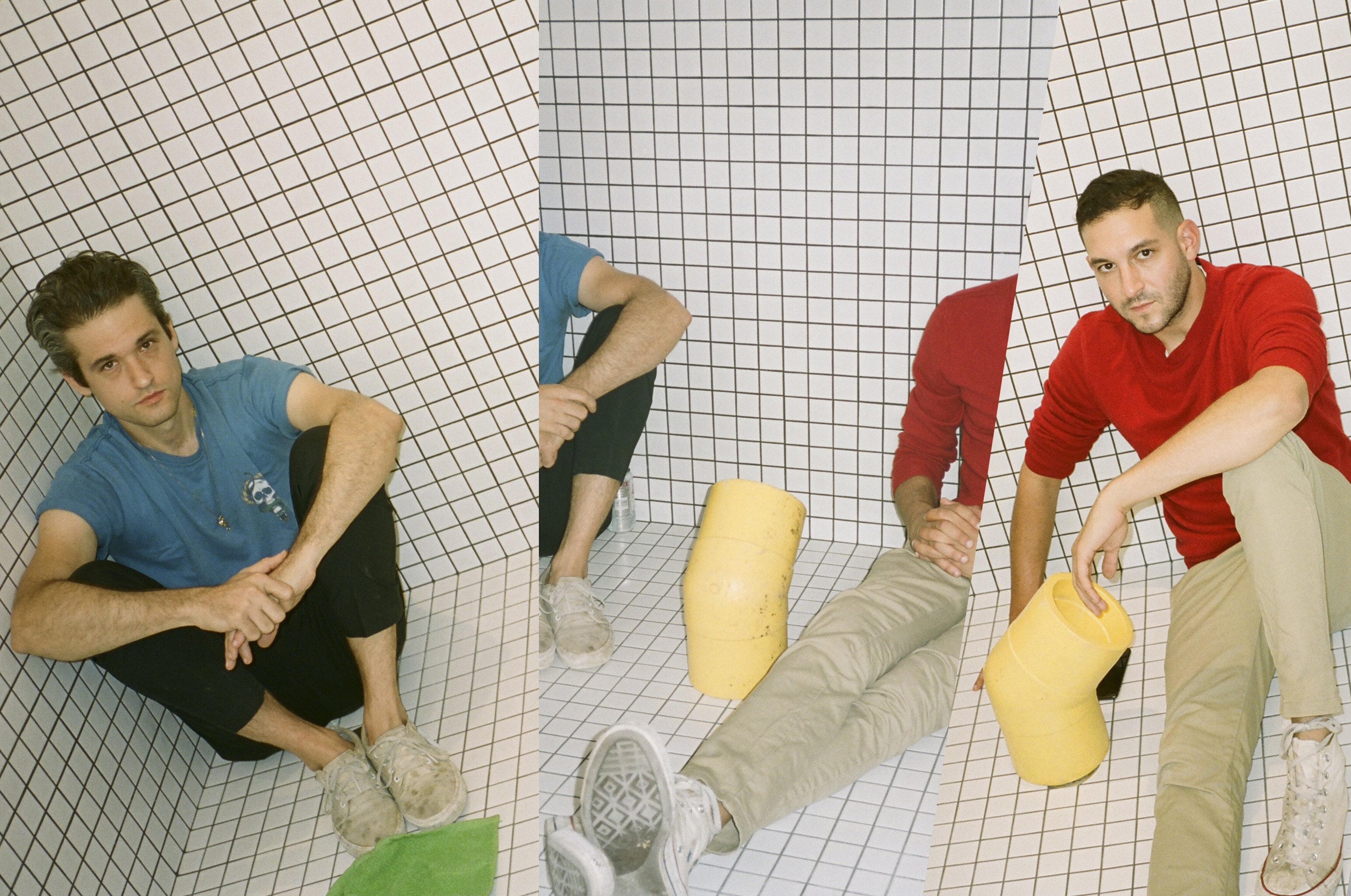 Their finely tuned ear for a booty-poppin’ boom-clap, ability to realize a song’s full potential without losing the artist’s core identity, and intimate familiarity with disco’s history is all over the place on Work for Hire. Another early remix of Monarchy’s “Love Get Outta My Way” all but does away with the original, transporting the listener straight back to famed New York disco club Paradise Garage circa 1980 (those cowbells!).

Since Holy Ghost! introduced themselves to the world with “Hold On” in 2007, they’ve experienced the wrath of Donna Summers fans, discovered what producers really do to Katy Perry’s voice in the studio, and found out how little control they have over remixes once they’re finished (Monarchy’s label wouldn’t release their remix until it was leaked on Annie Mac’s BBC1 radio show). Below, the duo share with SPIN what they’ve learned from a career of transforming artists’ songs into something that’ll incinerate the dance floor.

Making remixes helps jump-start the next studio album process.
Frankel: Doing a few remixes also helps getting back into the swing of recording for us. Coming in, if we have nothing and we have to make a song, it can be very intimidating. It makes you not want to go into the studio if you don’t have a great idea, like, “Why are we going to sit here and bang our heads against the wall?” With a remix, you already have a starting point.
Millhiser: Through that you’re like, “That’s cool, we should use that drum sound.” The way we recorded the drums for [the remix of Jose Gonzalez’s “Let It Carry You”], we were like, “We should do something like that on our record.”

James Murphy’s clothing can double as studio equipment.
Millhiser: We usually start with a good drum sound. When we did that second Moby remix [“Blue Moon”], we jumped right into that’s when we did the “Sensei’s Kimono,” which never made it into the world. It’s a B-side from the second record [2013’s Dynamics]. We used James Murphy’s gi from his kickboxing class, but we called it a kimono. It was very good dampener for the kick drum, so we shoved it in there it became the “Sensei’s Kimono” — with James being the sensei.

Playbacks are pretty awkward.
Frankel: When Phoenix went to do SNL, we had the same manager at the time, and they were like, “Come bring us the remix [of “Lisztomania” off 2009’s Wolfgang Amadeus Phoenix]. We went to this loud-ass bar in Soho and they were like, “Oui!”, just standing there. And there were four of them. Tomas is just [mimes listening to headphones and giving thumbs-up sign]. It took 30 minutes for all of them to listen to it. Another beer, anyone?
Millhiser: The same thing happened with [our LCD Soundsystem remix]. Right before they were shooting the “Drunk Girls” video, they were all having dinner, so I went to [Williamsburg restaurant] M Shanghai to play him the remix while I was worried about the horns being too loud. He said, “What’s the problem? Play ‘em for me.” I said, “I’d really rather not.” And he said, “Come on, play it for me.” That one’s, like, eight minutes long. He just sat there, totally expressionless, and said, “The horns are fine.”

You learn a lot about how pop music is produced.
Millhiser: Katy Perry gave us stems and they were a disaster. It’s crazy to look at a Katy Perry session. There are 200 tracks, 50 for the vocals alone. When you hear her vocals isolated — no offense, she’s talented and has a great voice (a Christian voice) — but they tune her in the most brutal way. There’s not a track that isn’t perfectly tuned.
Frankel: If it’s a rock band, like [on our unreleased Kings of Leon remix], the drummer speeds up 15 BPM over the course of “Cold Desert.” [That’s from] a remix that never came out [when we did it] five years ago. Many bands record straight to tape, so you have to quantize it to get it perfectly in time. It used to take a day or two to reset those parts but now ProTools has gotten a lot more advanced.
Millhiser: Or like the Stevie Wonder stems for “Superstition”? You listen to the clav[inet] part, which is generally considered one of the funkiest themes in all time, and you’re like, “This is borderline bad, it’s out of time, it’s cheesy.”  But with everything else it sounds incredible. It’s unfair to remove it from its context.

Beware of Donna Summer fans.
Frankel: The label couldn’t find the masters [of “Working the Midnight Shift”] — which is common for a lot of old disco stuff — so we asked, “Do you guys have the multi-tracks? And they said, “No, but we’re digitally extracting them,” which at the time three years ago was a very new technology. Through these crazy phasing processes they’re able to extract the vocals from a stereo mix of a song.
Millhiser: I’m always careful to say this: Donna Summer sounded amazing, but the file itself had all these digital artifacts, and didn’t do her vocal justice, so we said, “Can we have someone re-sing it?” And they were like, sure. [Donna Summer’s] family approved the whole project.
Frankel: It came out, they were really stoked on it, we were really stoked on it, and then we met the wrath of Donna Summer fans.
Millhiser: They were like, “This is not Donna Summer! You think you can out-do the queen?” It was a lot of very angry gay men basically. It was wild, just like — all these really hunky gay guys yelling at us. I’ve never seen my Twitter like that.
Frankel: The label threw us under the bus. They didn’t say anything like, “This is why they re-sung the vocals,” so we had to write a long-ass apology that made it clear why we did what we did.
Millhiser: The label acted like they didn’t know. They were like, “They re-sang the vocal? We didn’t know. We are outraged!” If anything it made us slightly cynical about doing anything posthumously, and honestly, now we’re more reluctant to get in a situation where we might have to re-do the vocals.