Hiatus Kaiyote School Us on Aussie Cuisine and Conservative Politics 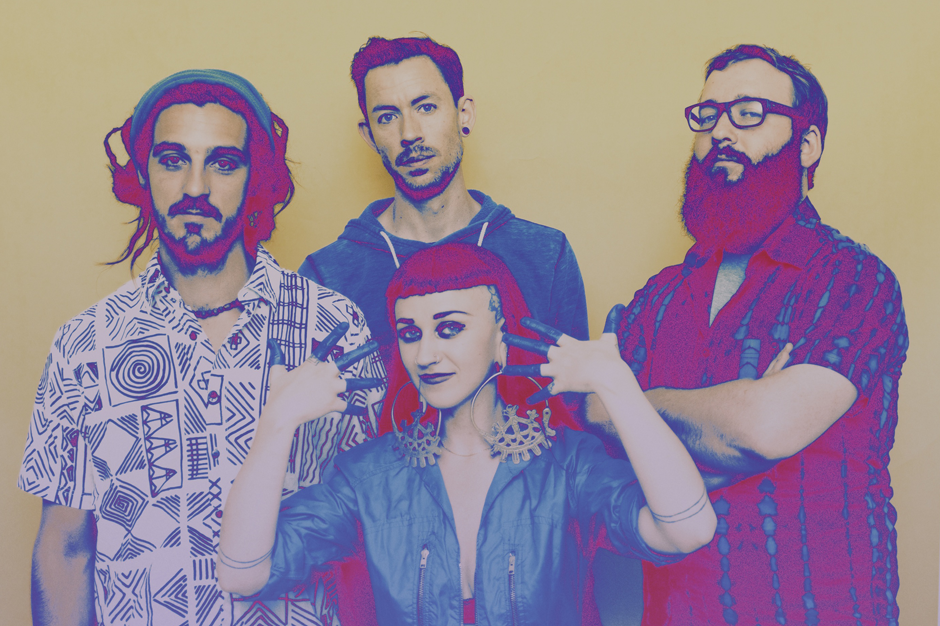 Hiatus Kaiyote look a little worn out. On tour in support of their recently released 18-track sophomore release, Choose Your Own Weapon, the Australian foursome — which consists of vocalist/guitarist Nai Palm, drummer Perrin “Pez” Moss, bassist Paul Bender, and keyboardist Simon Mavin — trudge in to the Pie Shop in Park Slope, Brooklyn after a late Tuesday show at Manhattan’s Gramercy Theatre. Each orders a selection of espresso and DUB (Down Under Bakery) meat and veggie pies. “I don’t know what a ‘DUB’ pie is,” admits Bender before ripping into his snack. “They love dub [music] in New Zealand, so maybe that’s it.”

Most of the patrons in the snug shop gingerly approach their own meat pies with a knife and fork, but Hiatus Kaiyote, who play a heady combination of jazz-funk, electronic, soul, and prog, each grab a pie with their hands and ravenously bite in.

Much like the minced ingredients they’re consuming, the foursome have an organic way of fusing their varied individual talents — some, like Bender, are classically trained musicians, and others, like Palm and Moss, are purely self-taught. They initially came together in 2011 when the bassist saw the hennaed singer, who takes vocal inspiration from a diverse set of singers like Björk, Billie Holiday, and Lauryn Hill, perform a solo show at a Fitzroy cafe called Gertrude’s Brown Couch. From there, Moss joined the group along with his roommate Mavin, an established session musician, and the crew recorded and subsequently released their debut album, Tawk Tomahawk, via Bandcamp in 2012.

A few years later, and the Melbourne-based crew are all set up with a Sony Records deal, traversing the globe (they’ll play the Roots Picnic in Philadelphia on May 30), filming in-the-studio roc docs (watch an SPIN-exclusive one below), and seated around a table sucking down flaky pastries, which, despite being culinarily fetishized in proudly diverse cities like New York and Los Angeles, are basically just “drunk food you can get at a 7/11″ Down Under, according to Bender. “There’s no real original Australian cuisine,” he explains through bites of veggie curry pie. As Palm explains how Australians enjoy a nice kangaroo-based meal now and then (“It’s really rich”), Bender provides some food-based background on his homeland. “When the British and Europeans came over, they came into an entirely different environment. They tried to do everything like they did back home. So you’ve got cattle and cows and stuff. Now people are eating camel. Camel burgers are really good.”

While they extol the virtues of the Tri-State area’s Mexican food and pizza (“I’ve had dreams about New York pizza,” says Palm), the band, who were the first Australian band to be nominated for an R&B Grammy in 2013 and have enthusiastic co-signs from artists like Erykah Badu, ?uestlove, Prince, and Q-Tip, would much rather drink brew from their homeland. “The coffee situation is definitely [lacking], in New York at least,” says Bender. “Most of the coffee in America is really bad. Australia is really well known for coffee.” Adds Palm: “You’re lucky if you can get espresso [in America]… In Melbourne, you can walk into any cafe and ask for [espresso]. Here, it’s like drinking from a watered-down ashtray.”

As the conversation shifts from Australian food to Australian politics, Palm launches into a diatribe concerning mass forced closures of Indigenous communities, and likens them to North America’s own troubled history with Native American communities. “They’re kicking people out of their native land,” she says. “America, for example, with the Native Americans — much of that trauma is looked back on as this dark part of history, and you’re trying to reconcile that. Australia is that now.”

“They may not be, like, slaughtering people,” she hedges. “But there are more children are removed from Indigenous communities now than there ever were before. They just do it in this really sneaky way. Because Australia is so big and a lot of indigenous communities are really remote in Australia, it’s rare for that kind of information to even break through. It’s one of the most ancient cultures to ever exist.”

Palm and Bender assign much about Australia’s social and environmental issues to poor leadership from Prime Minister Tony Abbot, whom the bassist labels “a total denialist and skeptic.” “People think that Australia is a very forward-thinking country, and it seems like it’s open-minded, but it’s actually very backwards,” he says. “It’s purely on a governmental level. I think because there’s such a vast amount of resources to exploit, people are hanging on to this really backwards way of thinking.”

“We’re on the UN Watch list for how fucked our situation is,” Palm says, referring to the country’s treatment of people who seek asylum, Indigenous populations, and the disabled. As if this one character foible explains everything else that she finds distasteful about him, the singer sums Abbot up in exactly four words. “He eats raw onions,” she says, and returns to sipping her espresso.