Breaking Up Is Hard to Do: Samo Sound Boy Gets Personal on His Debut Album

Home » Features » Breaking Up Is Hard to Do: Samo Sound Boy Gets Personal on His Debut Album

Last summer, Samo Sound Boy (a.k.a. Sam Griesemer) was supposed to be having the time of his life. The LA-based producer and Body High label head had just released Friend of Mine, the debut full-length from his DJ Dodger Stadium project, a collaborative undertaking with label co-founder Jerome LOL, and while the record was piling up acclaim and taking the pair around the country and ultimately the world, Griesemer wasn’t quite enjoying it. “I felt a little detached,” he says. “I couldn’t really get into it that much… all this stuff that I had really wanted to happen was happening, but it was just kind of weird.”

The music wasn’t the problem — it was Griesemer’s personal life. More specifically, he had recently gone through a breakup, and the aftermath of exiting a nearly three-year relationship had left him feeling “numb.” “It was one of those things where you get out of a relationship that had been a bit impossible to hold together,” he explains. “The feeling was remarkably close to the feeling of falling in love, but it was the falling out part. It was something that you just couldn’t stop… it was the sad part, the end part.”

As many artists in Griesemer’s position have done throughout the years, he eventually sought solace in the studio. “I just wanted to make something that would shock me out of this a little bit,” he says. The initial result was “You Come for Me,” a soaring tune that would ultimately become the final track on Begging Please, his debut solo album. Griesemer jokingly refers to the song as “my equivalent of John Cusack holding his radio above his fucking head,” while acknowledging that “this is the furthest [my sound has] ever gone, the biggest and the most cinematic I’ve ever made it.”

Partially inspired by Marvin Gaye’s quintessential 1978 breakup album Here, My Dear, Griesemer had already been toying with the idea of making an explicitly autobiographical record about his own romantic split, and the creation of “You Come for Me” cinched it for him. “[After finishing the song], I thought, ‘This is the hopeful one,'” he says. “After everything falls out, this is what you want to hear to move on. This is what’s going to bring you to the next thing. I knew that it was the end [of the album] as soon as I made it, and I just worked backwards from there.” 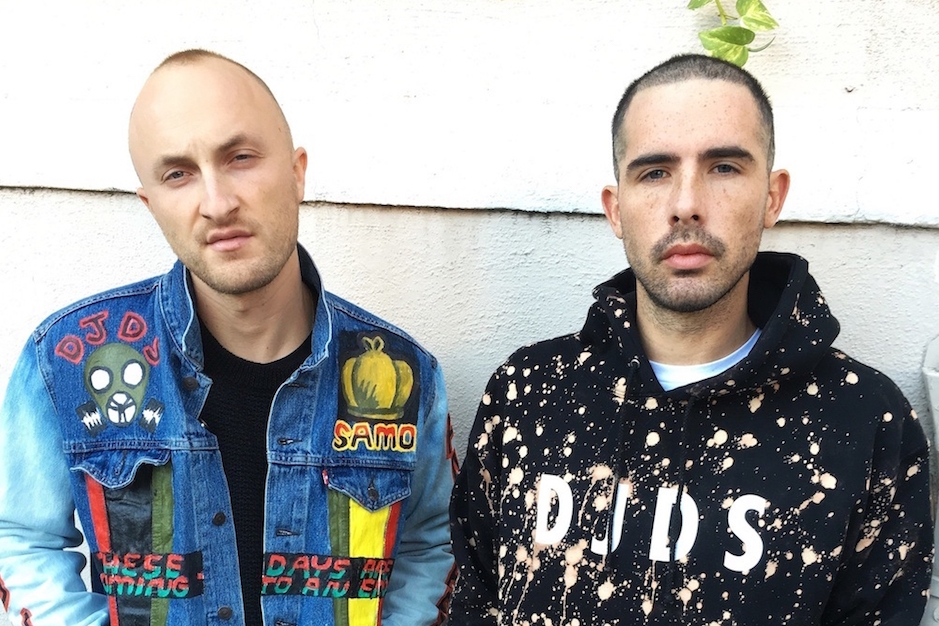 Review: DJDS Unload Their Hearts (and MPC500s) on ‘Stand Up and Speak’

Of course, working backwards ultimately meant tracing his failed relationship back to its origins and chronicling both the good and bad times that had happened along the way. Begging Please is a complete narrative, Griesemer explains. “The [tracks] in the beginning are more reflecting the excitement of meeting someone that you’re really going to fall for, when you start to fall really deep, really fast and what that feels like.”

Even on more lighthearted moments like “Baby Don’t Stop,” “Feel Something,” and “The Only Thing,” it’s hard to ignore the sense of melancholy that permeates the entire LP. “The other big part of this album for me is that it’s kind of about growing up a bit,” says Griesemer. “There’s nothing like being in a really serious relationship and then being out of it that makes you grow up… Once that happens, there isn’t this total happiness that’s totally pure and tinged with nothing. You realize that everything is a little bit more complicated and people all have different things that they’re carrying around with them.”

Communicating these sorts of complex emotions —and being this openly vulnerable — is an especially tricky proposition within the largely instrumental context of house and techno. Despite its more club-friendly offerings, the new album finds him breaking away from most of his pre-Begging Please catalog of functional, dancefloor-oriented tracks. “I kept on thinking about the concept of end credits in a movie,” says Griesemer. “I just wanted the whole thing to sound like end credits.” Beyond that, vocal elements are now playing a larger role in his work than ever before. The voices heard may still be samples, but where Griesemer’s past efforts largely used these snippets to accentuate his rhythms, they’re now front and center and responsible for telling a story.

Using bits and pieces of other people’s voices to assemble a highly personal narrative may seem like a daunting task, but Griesemer has always enjoyed sourcing vocal samples, and approached the challenge for Begging Please the same way that he always has. “I’ll go to Amoeba and buy 50 records from the 50-cent bin,” he explains, “and just listen to all these terrible a capellas from early 2000s R&B. This shit isn’t even online… It’s promo radio stuff from the early ’00s that went nowhere… It’s the cheapest of the cheap. It’s not like rare breaks or I’m buying rare groove records to sample. It’s literally other DJs’ trash.” Nevertheless, he ultimately found plenty of gems amongst his record haul: “I bought all that and then spent days going through it all, just waiting for the little pieces that clicked. I really liked doing that. It was a lot of fun. It felt like it all came pretty naturally and helped shape the record.”

It was important for Griesemer to release such an individual record on Body High, a project that’s become more than just a record label—it’s a venture that Griesemer repeatedly describes as personal. “I could never see myself shopping this record to another label,” he says. “It’s very intertwined into what Body High is and the type of label we’ve tried to create.”

That type of label fits squarely into the unorthodox category: the release of a new clothing item is often just as hyped as the latest record, and Griesemer lauds the work of Detroit veterans like Omar-S and Robert Hood as often as Belgian fashion designer Raf Simons. “It’s always been a strange thing to me with dance music,” Griesemer explains. “Dance music really should be the most beautiful, freeing thing there is… [but] too many labels and purists feel a need to put things in a box all the time, like, ‘If [Body High] is designing new T-shirts all of the time, then how can this really be serious techno?'” The producer sees things differently. “With my music and with Body High,” he says, “once we started to let books and movies and fashion and the city into what we were doing, I think that’s when it got good.”

This wide-ranging approach helps explain why Body High’s upcoming release schedule includes not only additional clothing items, as well as new music from Jerome LOL and Montreal producer Motions, but also a collaborative graphic novel and record from Floyd Campbell and Griesemer himself. It also spawned the three-part video series for Begging Please, another collaboration with Daniel Pappas, who had previously created the innovative, drone-based clips for the DJ Dodger Stadium album last year. “We thought about what we liked from the drone videos,” says Griesemer, “and the biggest thing that we had both really gotten a lot out of is that in LA, if you can leave a camera on long enough, it will be interesting.” All three videos star Pappas’ real-life girlfriend Nathalie Love, who was tasked with conveying a particular emotion while being filmed in slow motion for three to five minutes. “We didn’t plan them that much,” says Griesemer. “What the camera picked up is what the camera picked up. Nathalie did an amazing job, but the rest of it we left to fate.”

Despite their simplicity, the videos are remarkably potent, especially the clip for “What Can I Do,” which features a distraught Love breaking down and crying during a particularly intense dim sum outing. Of the three videos — all of which are somewhat autobiographical — it’s Griesemer’s favorite, and also the one he says is the most “true to life.” He’s now quick to point out that “the feelings that went into making this last year, that’s not with me now, day to day. It’s in the past.” But Griesemer also admits that he’s not even sure if his ex has heard the album. “We can’t even really talk to each other right now,” he says. “It’s not because we hate each other or anything like that. We just had to step back to move on and figure ourselves out.”

“I’d love for her to hear it eventually,” he continues. “I always hope that she knows that she was that important to me. But I think if it wasn’t like that, if I was in the position to just email her over the album, it wouldn’t have been much of an album.”