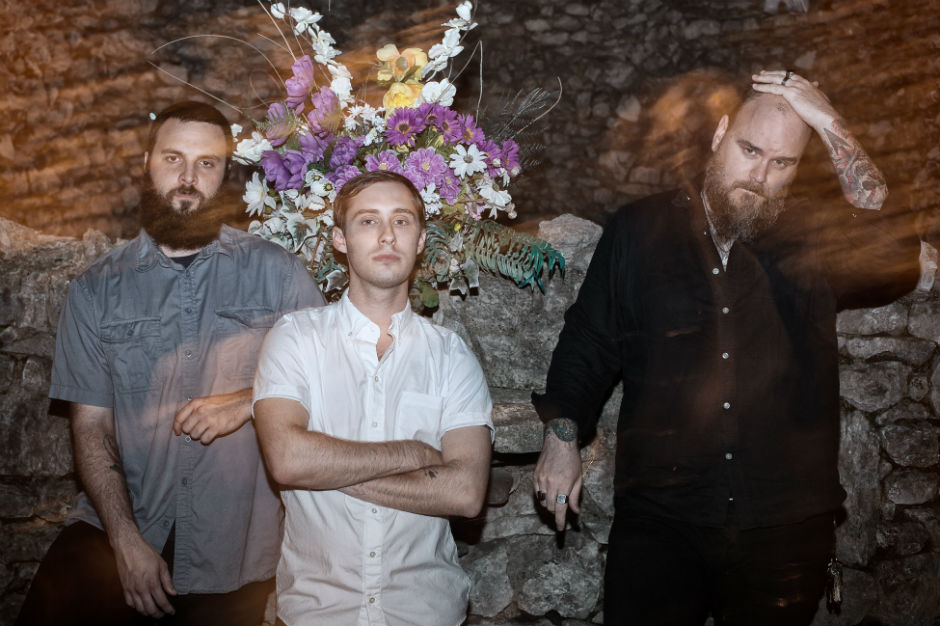 Twelve years and five albums into their career, Louisville power trio Coliseum have evolved from a predominantly hardcore-punk band to one whose new, invigorating LP, Anxiety’s Kiss, sounds more in league with early U2 than Minor Threat. That’s not to say they’ll be waving the white flag at Red Rocks anytime soon, though. The band still keeps a fiercely underground mentality — current label Deathwish (their fourth in ten years) is home to hardcore and metal heroes like Converge and Deafheaven and despite the shimmering production and soaring guitar riffs found on Kiss, the album still crunches with basement-venue intensity, in large part to the thunderous growl of frontman Ryan Patterson.

When asked about growing out of the punk scene, Patterson clarifies: “I like bands that grew up with it… I love the people that never really stopped and make great records, and you can tell it’s the thing they’ll always do, no matter if people are there or not… That’s really inspiring to me, that’s really meaningful.” The 37-year-old lifer doesn’t anticipate ever being able to leave the underground from a commercial standpoint, either. “I think a lot of those bands that [crossed over] because of that [alt-rock] heyday, they can kind of reach a peak and coast along, whereas now, a band like us, we’re kind of more in this undercurrent where there may never be a peak, We may just be swimming along that current forever.”

SPIN talked to Patterson about the influences behind Coliseum’s latest, about the muddled effect Nirvana’s had on the rock underground, and about whether his youth growing up in Louisville turned him into a college basketball fan. (Spoiler: It didn’t.)

Is there anything in particular that inspired the sound of the new album? A jumping-off point for it?
A lot of that ’70s and ’80s post-punk stuff, that stuff. The band’s been always into D.C., Dischord stuff, Fugazi is a big thing for us. As the band’s gone on, I feel like more and more back to the stuff I grew up with. I’m 37, so the heyday of 120 Minutes. Lots of Hüsker Dü, Superchunk, Dinosaur Jr., and then SST and Touch and Go and Dischord and all that stuff. Fugazi and Killing Joke for me are two of my favorite bands ever, so those are always right there at my fingertips.

It seems like on the new album you guys are trying to amp up your sound almost to that arena-rock strata of U2 and Simple Minds. Was that sort of stuff an influence on you?
Maybe. There is some U2 that I like, but I also feel like U2 was probably also influenced by someone like Joy Division. The single-note delay and chorus thing, I do that a lot. There’s a band called the Sound, they toured with U2 but never made it, the singer killed himself in the early ’90s. They were a really wonderful U.K. band that I love, it’s like U2 but way more emotional, so they really inspired me a lot.

Was there anything that focused this album around that sound, like when you talked to the rest of the band, could you feel yourself moving in this direction?
I feel like we’ve been getting there the last few records, and on this one it all tightened up a little more. A little less riffing and a little more tightened rhythm section and the guitar, the guitar is almost never riffing. There’s a few kind of riffing songs on the record, but a lot more melodic guitar lines that sort of gives it that vibe.

Do you guys ever worry about what the underground scene thinks when you go for that kind of sound?
I don’t think so. We kind of had a big shift in 2010, our third record had a lot more of that melodic stuff. Now when people get all shocked when they hear melodic stuff from us, I’m kind of like, “Where have you been?” I don’t really care.

Does it have the same energy live?
I think so. It’s always heavier and louder live, and there’s still a lot of sweating and movement. I still see us as a punk band, and it’s part of the same mission. There’s not a lot of, I don’t know what we would do as a reserved band. We’re still a very intense band live.

How cold was it when you were filming the video?
It was fucking cold, man. It was a cold winter everywhere, but it was like outrageously cold, and it was inside this all concrete warehouse, so it trapped all the cold inside. In between takes, we’d just go outside to get in the sun. It was gross, and we all got kind of sick, and there were these wind machines just blowing gross stuff in our nostrils, it was disgusting.

Is it a bummer to you, the marginalization of punk and underground rock in the mainstream?
I don’t really know, I don’t really think punk needs to be… on one hand, I was kind of bummed that punk broke, I was bummed about the whole Nirvana thing. In hindsight, I was really sad that punk became just a genre that was commodified, and what Nirvana brought outside of music was nothing from the counterculture.

You weren’t a Candlebox fan?
Right. I like that Candlebox brought Seaweed on tour, but I went to that Experience Music Project in Seattle the other day, and it was like this big display of all these record covers. I guess it was all these bands that were inspired by or contemporaries of Nirvana in some way, like Gang of Four, or Butthole Surfers, Fugazi, and I was like, these bands are absolutely torchbearers. Gang of Four and Wire, these are bands that tore down walls of ideas, and Nirvana tore down a wall of… I don’t know, commercialization maybe? But they didn’t really bring that culture with them.

I don’t really want that. I don’t want people to come in the punk culture and take it… I wouldn’t want to become a huge arena-rock band, because inevitably, it would probably suck out everything that was meaningful to me about music. Certainly, I would love to have that bit of fame that makes you able to do music for the rest of your life, that would be nice.

As a Killing Joke fan, were you really angry when you first heard Nirvana’s “Come As You Are?”
When it came out, we were all just like “what?” Like, someone said, “It’s so cool that Nirvana can do something so cool with a riff, and Killing Joke can’t.” I wanted to strangle them, but I guess they worked it all out behind the scenes.

You guys have been kind of nomadic in terms of record labels, are you happy at Deathwish?
Yeah, we are. We’ve never been unhappy with anything we’ve done, it’s just trying different things. We put out a record with a label called Relapse in 2007, and that was the only thing… it was an experiment that didn’t work. It was a very metal-oriented label, and it didn’t really work for us, so we did a few records with Temporary Residence, and everyone was happy with that, we went on to do something else.

Does that expose you to different audiences that you’re kind of feeding from different underground cultures?
I think that’s always the idea, I don’t know how much that works anymore. Maybe unless you’re on Sub Pop or Matador or something, where there’s a huge marketing push, but I don’t know how much of that happened with Temporary Residence. With Deathwish, it seems like some of that may be already happening, they have a younger audience, so they’re going to be a little more open to hearing things.

They’re able to get a sticker in the mail and be like “Oh, check out this band!” We have a long history with them, just as people, but I don’t really think… I think you do a record with a label, and if you do the next one with a different label, there isn’t bad blood. You do something, and you make something, and it’s a great experience, and then you go on to somewhere else.

You self-released for a little while.
We have done some releases ourselves, but never our albums. We always go outside for albums.

Is that something you’ve attempted to do?
People have suggested it, but marketing yourself is no fun. It’s a lot of money to spend, sometimes I’d rather someone else be in charge of that. I’d rather just write the songs and play shit.