Get to know the band in the video below

Just in time for summer, Baltimore-bred Diamond Youth have recorded their first LP Nothing Matters, available May 19th via Topshelf Records, and the accompanying live interview and performance — recorded at Hurley Recordings and studio in Costa Mesa — captures a band blossoming into maturity, without losing their edge. The video is an invitation into the quartet’s world, featuring a perfectly infectious live performance of debut single “In the Clouds,” and the blast of power pop smarts and verve perfectly capture a confident band, who haven’t forgotten how to have fun. The video also juxtaposes hyper-colored vert ramps with an intro interview featuring the guys, who, while still scattered throughout the country, couldn’t have imagined recording an album anywhere else, especially the frigid East Coast. The quartet’s bright harmonies, sunny guitar lines, and fuzzy reverb are a perfect pairing to summer debauchery, coastal drives, and cheap thrills.

Recorded in January, Nothing Matters is a testament to a band at the height of its creative powers. The group’s first three EPs, while capturing raw power and bracing guitar pop, are transformed into a cohesive 11 track whole on Nothing Matters. With influences including Queens of the Stone Age and The Pixies, Diamond Youth are simultaneously accessible yet gritty, with catchy, sing-along anthems driven by a youthful, punk audacity. Their sound was shaped greatly by the accommodating and laid-back Hurley Recordings vibe, infusing the guitar-driven beach pop with brash, skater energy. Tracks titles “Riptide” “In the Clouds,” and “Far Away From Earth” conjure images of auburn sunsets, wraparound sunglasses, and lazily wafting indica smoke. The beaches, waves and Hurley confines couldn’t have been a better fit for the band, whose mutual love of art, design, and skating perfectly pairs with the surrounding SoCal energy. As Diamond Youth guitarist Sam Trapkin recounts, “To be able to go outside and Bob Hurley is skating past you is so sick. I couldn’t imagine recording this record in the winter in New York.”

The Hurley headquarters, based out of a converted warehouse, are taking their foray into music and art seriously. In 2014, they hosted the 60th Anniversary of the Fender Stratocaster with a blowout party and art gathering, had in studio performances from XO and Cheap Girls, and manned a printing press booth at SXSW. The studio’s wood-paneled walls, adorned simply with guitars and the studio logo, echoes the simplicity of the space. You won’t find any suits stroking their beards while looking at the bottom line here, and that, along with Diamond Youth’s electrifying performance, shines through in the video. Diamond Youth will be embarking on a Brooklyn Vegan tour this May with Superheaven and Rozwell Kid. Check out the interview and live performance above. 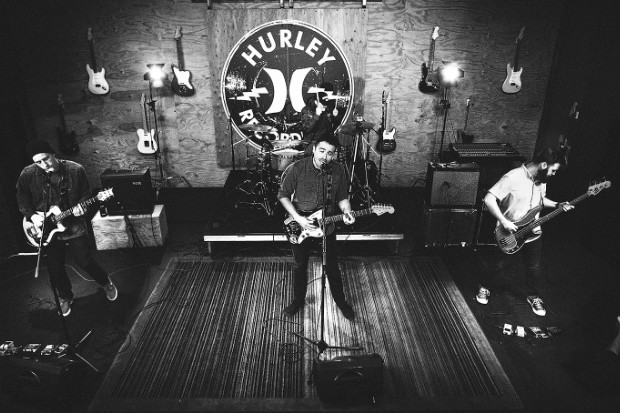