The sound of George Lewis Jr., a.k.a. Twin Shadow, can be a tricky one to put your finger on; drawing from a wide variety of influences spanning new wave, soul, classic rock, and house, while not really being directly reflective of any of them. It doesn’t make it any easier that some of his most famous songs are actually some of his least representative, and that he’s changed fairly dramatically from album to album, most recently adopting a more anthemic, muscular pop sound on the his excellent new album Eclipse.

Meeting with Twin Shadow after his performance at SPIN‘s South by Southwest showcase last week, we tried to parse his musical DNA by playing him various songs by potential influencers, peers, and even an arguable musical descendent or two. Lewis acknowledged a connection to some, denied others, and (rightly) wondered why the hell people kept bringing up a couple. Read his thoughts on nine jams of our choosing below.

1) Prince, “The Beautiful Ones” 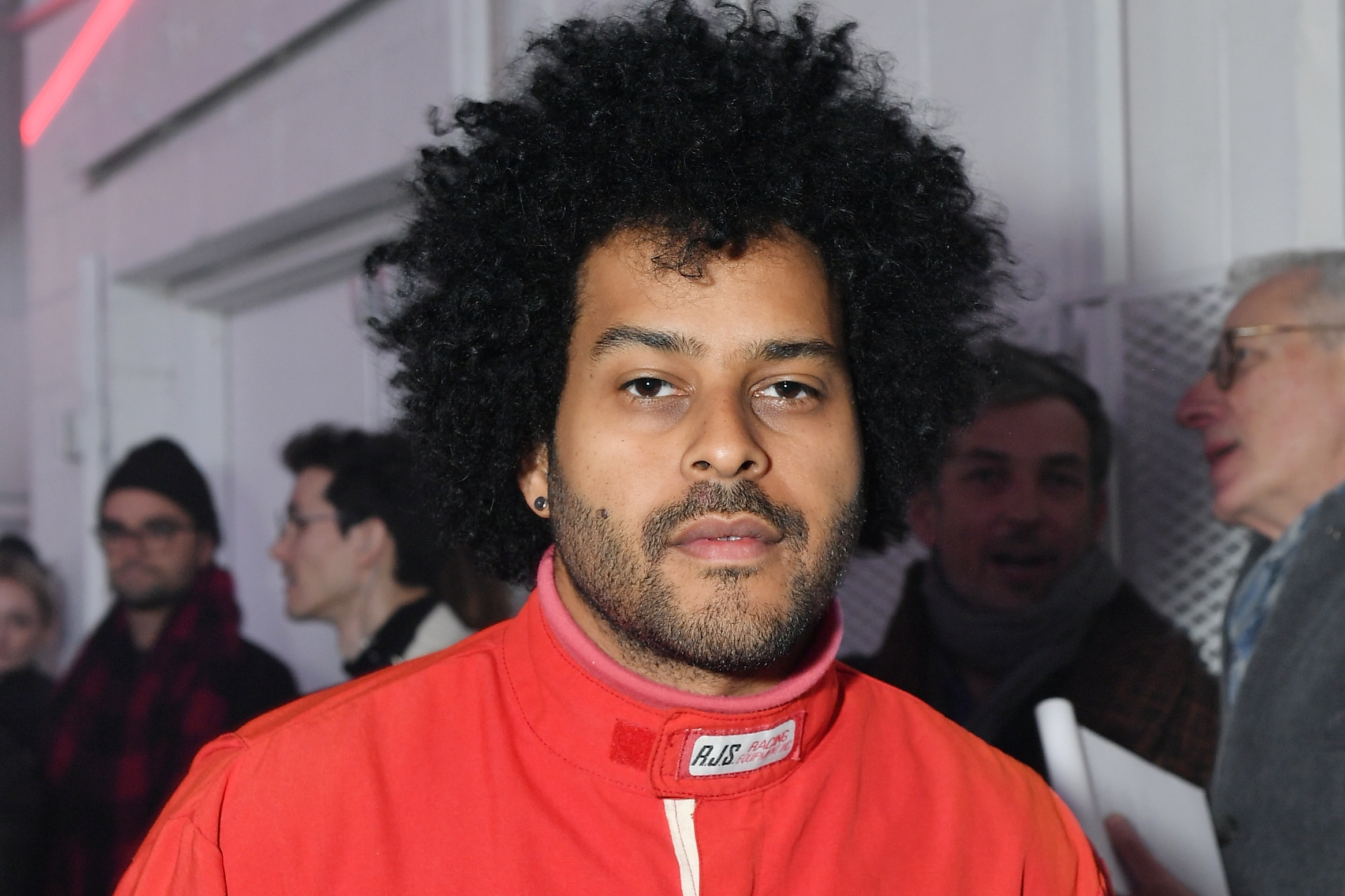 One of the best songs ever written. This song is, just from a production standpoint, probably the most futuristic… I don’t even think ’80s when I listen to this music, I just think this is, like, weird music from the future. Like, that piano that’s almost like a ’50s song slowed down, with all these amazing sounds. This is one of my favorite songs ever written.

Does Prince tower over everything for you?
Yes and no. I don’t put all my chips on one artist. Production-wise, Prince is one of the most important artists to me, but Bob Dylan still has probably affected me more than Prince. But I think Prince is an incredible human being.

Do you like this song?
I prefer “I Won’t Back Down.” But I think this a good song, I think his voice is incredible. I think it’s insane that that comes out of somebody. But I’d rather hear Tom Petty sing it though.

When you hear a song like this that gets this popular, do you think, “I could do that?“
Yeah, I think so. I mean, you never know until you write that song. I definitely understand why this song is so big.

Why do you think that is?
Because it sounds like “I Won’t Back Down”! [Laughs.] No, because I think it captures that sentimental feeling that everyone is always looking for. I think it embodies a lot of moments in life and I think people really feed off that. It reminds me of the way U2 used to do that, like with “Where the Streets Have No Name.”

Yeahhhhh! Okay, this is the best song ever written. I love this song. I covered this song in a cover series. When I was a teenager, before I could even come close to getting laid, this is the song that I tried to get laid with at every turn and it never worked.

Did it work when you covered it?
[Laughs.] I… don’t think I need music to get laid anymore. What is so cool about this song is that it was made at a time when a lot of R&B was getting formulaic, and then this came out and was just such a breath of fresh air, the simplicity of it. It’s crazy, I constantly go back to them.

How did you decide on songs for the cover series?
They were seriously so random, I let fans pick some of them, but this one was just like this song is religion to me so I went with it for the cover. Nobody knew it! All my friends were like “What is this ‘Cupid’ song?” I was like, “How did you not hear this song when you were in middle school?”

Is this “Eyes Without a Face”? Billy Idol? I worked with him, I wrote a song for his new record. This is a really good song.

Is he an influence on you personally?
Not in a really direct way, but at the same time…. y’know, “Eyes Without a Face,” “Dancing With Myself.” They’re huge, iconic songs that you can’t get away from and shaped all of us.

I think some of the songs on Confess, with the guitar riffs definitely remind me of Steve Stevens’ guitar riffs, I don’t know if that was conscious.
Steve Stevens is a really notey guy; I like to think of myself as more a minimalist. But some of the lead tones, I guess.

I’m better at this then I thought, but now I’m stuck. Oh this is… I know this song, it’s “Radioactive.” I’m not the hugest fan but I totally get why the song works.

I guess this is what stadium rock is now. It seems like what you’re doing with Eclipse is taking soul the same sort of level.
I definitely understand that this kind of chant culture makes people feel really good, being able to sing along and join in and I think that there is some of that on my record.

Do you miss when rock just sounded more like rock?
I’m a huge Thin Lizzy fan and I think of them as the ultimate rock band. And, y’know… there’s those days when I want to hear something like “The Boys Are Back in Town,” and wish that songs were written with that much energy. But I’m in no way a nostalgic fan, I also think people are making really incredible music now and the future is really bright.

Who are you digging these days?
Kendrick, although I haven’t even had a chance to just sit…

That album will take you the rest of your life.
Yeah, that’s what I hear. What’s funny is we tried to listen to it in the bus, and it was too many people on the bus, and it’s such a crazy sounding record that I was like… Is this record sounding crazy or is it the speakers on the bus? So I have to get into that. I’ve been talking about these guys Kero Kero Bonito.

This song is the shit. Rest in peace, Frankie Knuckles. What is amazing is I actually got to see them before he died, in New York, and it was literally right before he died. It was the craziest thing, my buddy Jiffy owns this club in New York, and he had him DJing, and I swear to God, I was one of 20 people in the room. And I just sat and watched him for an hour and he was amazing. I feel really happy that I got to see someone who’s such a master do his thing, and I would’ve never been able to tell you that he was going to die, like, two weeks later. But he looked great.

Is house music something you’re interested in?
Yeah, for sure. I definitely obsessed over this and Kerri Chandler for a long time and I definitely prefer this era of house. Very melodic, and the chord movement is really symphonic.

I thought you were kind of dipping your toes in those waters with “Old Love/New Love”.
Yeah, there’s some of that in there, there’s some Kerri influence on that track.

Is that a direction you could see yourself going further down?
Yeah, my keyboard player and I joke… well, we don’t joke, we want to make an acid house record. And we will, or we’ll make some sort of house.

Is that a promise?
That is a promise.

This is a pretty new song so I wouldn’t necessarily expect you to know it.
This sounds more new wave… then I think people think Twin Shadows sounds.

Yeah, this is a song called “Easy to Lie” by Night Drive, and to me it sounds like a lot of what you were doing on your last couple albums, but not so much anymore. I’m curious how it makes you feel to hear people going for this sound now.
I think we should put away this sound. [Laughs.] No, I don’t really think that, I think people should do whatever they want. I never thought Twin Shadows sounded like this. When I listen to this, I think it sounds like new wave. I think it sounds like Billy Idol. I never thought…

Maybe only on a couple songs, maybe those songs were disproportionately looked at as representative of your catalog.
Maybe, possibly. I get the driving pulse. I understand how you could compare this to “Five Seconds.” But I never did that [imitates snare] “CHH CHH CHH!” And there’s like, these hallmarks, these signatures that this has…. Twin Shadow has never been about classic elements of influence, it’s more just allowing the air around an influence have a breath inside the music.

8) How to Dress Well, “Repeat Pleasure”

I don’t know this, but I’m feeling it.

This is How to Dress Well.
Oh, OK, yeah. I like this record, actually, this is his last record. I was into this record, and I saw him play recently in Oslo.

Do you listen to a lot of this bedroom R&B kind of stuff?
Uhh… No. I don’t. It kind of wears on me pretty quick. I prefer R&B dark and dirty.

What R&B stuff of recent years are you into?
I think the Weeknd is doing R&B pretty well, I wouldn’t call that “bedroom R&B.”

Not in the same way, no.
I prefer it that way but I think this is a great record, a really creative record. I prefer a little, God forgive me that I say “soulful,” but…

I am a sucker for that bass sound. [Recognizes.] Oh, I love this song. This song is used at the end of… what movie was this in?

Drive.
Yeah, I was feeling this. I like how fucked up this song is; it is so not a perfect song. Like, the chorus doesn’t quite start on a one, it kind of starts before the one. The singing keeps switching on the chords. I like how imperfect it is. I wasn’t that impressed with this film, but I did find this moment really effective.

I think most people, even if they didn’t really like the movie, they gotta give it up for the soundtrack at least a little bit.
This reminds me of something Angelo Badalamenti would have done with Julee Cruise, this kind of weird poppy, non-pop song that is kind of floaty.