Five Artists to Watch in March 2015

From a synth-pop Brooklyn R&B singer trying her luck at covering Beyoncé to a power-pop project initially sidelined by a life-altering illness, these are the five artists you need to know about this month.

Who: A trans-continental post-punk trio — or “post-worldbeat,” as their Facebook page classifies them — led by Atlanta-born singer Franklin James Fisher, Algiers mixes ghostly sonics with jagged instrumentation. They should be a lot less fun to listen to than they actually are; a large credit to Fisher, one of the most powerfully guttural vocalists in rock today, who brings gospel authority to the music’s drama The final product is harrowing but spellbinding — particularly live, where Fisher’s soul-wrenching performances prove almost uncomfortably captivating.
Sounds Like: TV on the Radio covering the Birthday Party.
Where to Start: The beautiful and brutally austere “Blood” — which, truthfully, could title the majority of songs on the band’s self-titled debut. — ANDREW UNTERBERGER

Who: A Chicago street artist and anti-violence advocate, Whispers has a surprisingly secretive persona. Despite finishing his debut album two years ago, he’s kept himself under wraps until very recently. Building a reputation around the Windy City with bombastic and confrontational performances (armed with only an iPod as a backing band), he’s intentionally kept his music off the Internet until recently, and the mystery lends itself to his skittish, high-concept vibe.
Sounds Like: Daniel Johnston behind an old Wurlitzer with Jeff Mangum on drum machine, backed by Ezra Koenig’s weirder, non-existent younger brother on vocals.
Where to Start: He’s only got two songs online, but they’re both killer. “Heart Don’t Know” is a good intro for the upcoming Summer In Pain, out March 24. — CONNOR O’BRIEN 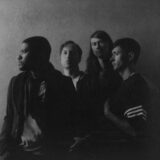 Who: A group of gloomy Gothenberg upstarts who pair familiar post-punk grit and grime with Maja Milner’s bitingly incisive lyrics, and a soaring bellow that betrays the singer’s 21 years. In contrast to their careening tracks, the quintet’s rise has been something of a slow boil. After a couple of limited-run releases dating all the way back to 2009, their sophomore album, Makthaverskan II, saw a well-recieved Swedish release in 2013 before Run For Cover Records brought it Stateside last year, landing their ramshackle ’80s guitar pop on these shores for good. Right now, Makthaverskan’s in the midst of their first proper U.S. tour, and as befits their nostalgic musical predilections, they’ve brought along a relic of the pre-iTunes age: a tour-only seven-inch, that just so happens to feature “Witness” — one of their best tracks yet.
Sounds Like: A handful of Swedish kids for whom Three Imaginary Boys was a Bible and the ’90s never happened.
Where to Start: Hearing their music on an LP gives the best sense of the capital-R Romantic sweep that they so often strive for. Makthaverskan II, too, has both higher highs and more heartbreaking lows than their debut. — COLIN JOYCE

Who: Recording under his fuzz-pop alias Catwalk, Nic Hessler — a singer-songwriter from Oxnard, California — caught the attention of Brooklyn’s Captured Tracks several years ago. Just before leaving to tour, doctors diagnosed the then-18-year-old Hessler with Guillain–Barré Syndrome — a rare autoimmune disorder similar to Multiple Sclerosis — which partially paralyzed him, rendering him unable to play the guitar. Time in the hospital provided him a useful reflection period, enabling Hessler to gain the perspective necessary for completing his first LP — this time under his own name. On his debut, Soft Connections (due March 17), the now-23-year old trades in his former alias and brain-melding style for hi-fi power pop. Jangly guitar licks on the intimate “Hearts, Repeating” align themselves with Johnny Marr’s lilting guitar riffs, a sound well worth the long delay.
Sounds Like: An American reincarnation of The Smiths meets modern-day Beach Fossils.
Where to Start: The breezy confessional of “Hearts, Repeating” and Hessler’s XTC-polished rollercoaster “I Feel Again.” — MATTHEW LEVINE

Who: When Valerie Teicher doesn’t spend her time bumming around Brooklyn, the Argentinian-born artist doubles as a celestial R&B singer by the name of Tei Shi. Spewing out dream-like melodies over subdued ’80s electronic melodies, Tei Shi embodies this indescribably alluring mystical pop radiance. She’s already worked with English indie rock band Glass Animals, released a killer cover of Queen Bey’s “No Angel,” and recently worked her way through New York City’s CMJ.
Sounds Like: A hybrid of Lykke Li and Destiny’s Child harmonies combined with the instrumentals of a smoothed-over soundtrack from an ’80s police procedural.
Where to Start: While you count down the final days till Tei Shi’s new EP drops in April, check out her debut project, Saudade. Besides the no-brainer “No Angel” rendition, mandatory listening includes the thumping “Bassically.” — MARGARET FARRELL