Dan Deacon premiered a trippy new video for his song “When I Was Done Dying” on Adult Swim’s Off the Air early this morning (like, 4 a.m. early). The surprise psychedelic visual shouldn’t really come as shock, given that the electronic composer’s most recent collaboration with the network was scoring the truly disturbing short Unedited Footage of a Bear. But back to “When I Was Done Dying” — the new video was animated in sections by nine imaginative animators Jake Fried, Anthony Francisco Schepperd, Caleb Wood, Taras Hrabowsky, Dimitri Stankowicz, Colin White, KOKOFREAKBEAN, Masanobu Hiraoka, and Canadian artist-musician Chad VanGaalen, and illustrates the Gliss Riffer track’s surreal and mind-bending lyrics (“How my skin did explode leaving only my shirt / But from shirt grew a tree and then tree grew a fruit / And I became the seed and that seed was a brute”.)

Watch it above, and read more about the making of Gliss Riffer (and see Deacon design a Muppet) in our recent feature. 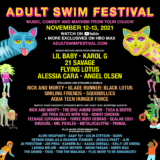