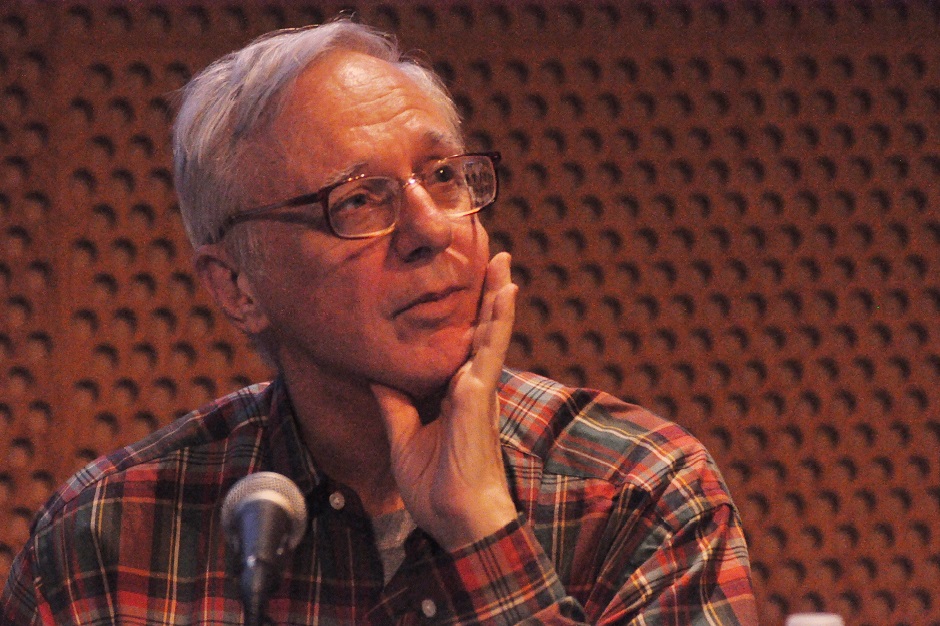 You probably wouldn’t be reading this publication if Robert Christgau didn’t largely invent rock criticism as we know it. Since 1967, the lifelong New Yorker has reviewed over 15,000 records, including six Young Thug mixtapes in October alone, which makes him an anomaly among 72-year-olds. (He’s also contributed to SPIN as recently as last year.) Tomorrow, his memoir Going Into the City: Portrait of the Critic as a Young Man hits bookstores, tracing his formative years through his early loves of baseball and jazz, and this excerpt details how a fireman’s son came to love arts journalism and would go on to define an entire niche of it.

Not to be a whiner, but M. did traumatize me, and I mean sexually, my prevailing symptom not impotence but anesthesia. If I pulled on my penis long enough I could get hard and even come, but the orgasm felt like convulsive urination at best. The skin on my chest was numb too. You can see why I admire Mailer for emphasizing orgasm quality. If only he’d understood it.

Yet although this physical correlative of heartbreak was frightening and depressing, it failed to extinguish my cultural euphoria or my personal confidence. Instead the two extremities coexisted. Whatever they lacked as fiction material, my American studies had compelled me to fend for myself—not coolly, that’s never been my way, but stalwartly, resiliently. And they’d also expanded my circles of socialization. Where before I made do with a few Manhattan friends, now I traveled half a dozen networks: Bob Brower’s homies, Tony Fisher’s classmates, Judy Rosenberg’s girls, the increasingly bohemian crew at Dupont when I put in some hours, Newark pinball buddies, and more. As soon as I had some income I rented a grim fifty-dollar tub-in-the-kitchen at 135 Chrystie, across the wrecked Sara Delano Roosevelt Park from 122 Forsyth just south of Delancey, where one night I ripped nine finger-flaying layers of linoleum off the kitchen floor and found Daily News pages from 1903 at the bottom. But by April an upwardly mobile Dorf colleague had bequeathed me a sunny 45-dollar tub-in-the-kitchen just east of Tompkins Square Park, a nabe where the younger residents tended Puerto Rican, the older ones Ukrainian and Jewish, and an ample melting pot added uncountable exceptions to the mix. It came with the same big plain doorless metal wardrobe that anchors my bedroom today. I’d hit the East Village. I felt so at home there I equipped it with my inaugural rock-LP purchases, including life favorites The Beatles’ Second Album, The Shirelles’ Greatest Hits, and The Rolling Stones, Now! (but not Martha and the Vandellas’ Dance Party). I felt so at home there I got a phone.

By the end of 1964 two of my grandparents had died, my mother’s mom Kitty just before I hit the road in 1963 after Tommy wasn’t instructed to administer her digitalis, my dad’s dad Pop of a 1964 stroke announced by a telegram with a typo that had Charlie Berg chortling in dismay: “LOP DIED.” My brother was at Hunter, where I introduced him to C. S. Lewis’s A Preface to Paradise Lost so he could write a Christian paper; my sister was at Flushing High, whence I invited her to a Bleecker Street Cinema pairing of A Hard Day’s Night and Breathless to nudge her toward perdition. And my friends were starting to get married, most impressively George Szanto, who’d fallen in love with the daughter of a moderately distinguished Anglo-Canadian family on the boat to Europe and spent his Fulbright year hitchhiking to and then with her. They made it official in Paris and quickly conceived a daughter I was proud to sit for when they got to Cambridge, where George was acquiring a Harvard Ph.D. His slightly older wife, Kit, was and remains one of the warmest, wisest, and ablest humans I’ve known. For a year or so I pursued her younger sister Shoss in an enlarging albeit unconsummated courtship in Montreal, Quebec City, and — for just one fine weekend — Manhattan.

It was with Shoss that I witnessed my first rock concert proper: Rolling Stones at the Montreal Forum, October 1964, day-of-show tickets four bucks, forty minutes max of hits and covers semiaudible due to crap PA and shrieking throng, quite an up anyhow, biggest revelation hundreds of longhairs waiting to disappear back into the Laurentians in the bus terminal afterward. Soon followed Otis Redding at the Apollo with Judy Rosenberg and the Negro boyfriend she’d met in Mississippi.

Where in Berkeley 1963 my most memorable musical palaver had concerned Bob Dylan’s “Who Killed Davey Moore?,” an antiboxing song I’d never heard but opposed on the basis of its title alone, now everyone I knew was enthusing about rock and roll: Dupont-based Texan navy vet and painter imparting R&B wisdom, Bennington aesthete creaming for Marvin Gaye’s flow, Bob Stanley heading up to Harlem for James Brown with his new friends in the Pop elite, Berkeley chum’s ex-wife topping Rubber Soul with Nina Simone she thought, little sister so very tickled by the four-in-a-bathtub cover of the Mamas and the Papas’ If You Can Believe Your Eyes and Ears, every damn body shouting the chorus of “Satisfaction.”

Bob Stanley’s saga bolstered my euphoria, because he was what they call in the art world hot. I loved his early Pop paintings and silkscreens, which began double-imaged but soon reduced to one,and which occasionally exploited op color flashes but usually enjoyed flat bright hues for their own sake. In a market primed for formally acute representations of the Beatles, Y. A. Tittle, and anonymous fuckers and suckers, they won the attention of Leo Castelli hypeman Ivan Karp and lesser Pop dealer Paul Bianchini, who gave Bob his first one-man show in 1965, the music at the opening topped off by Dobie Gray’s high-flying “The ‘In’ Crowd.” Having spent his pre-Dupont years painting in his winter jacket, Bob was dizzied by the high life the way the suddenly famous always are, even when their fame is limited and fleeting — a lesson I retained as I pursued my lifework. Soon he quit Dupont, left his wife, and rented a loft on 28th Street. For a while our friendship stalled slightly. But that didn’t stop him from giving me a drawing that counterposed Willie Mays sliding into third base against a grinning male nude poking a reclining female nude, or — an even bigger deal — a big tricolor porn tempera I hung across the kitchen from the bathtub.

Also kind of hot was my Flushing High classmate Lenny Lipton. Like Charlie Berg, Lenny had yelled up unannounced at West 70th Street the autumn of my first year in Manhattan. There he told an unlikely story about writing a hit song on a dare for his Cornell pal’s group,whose Pete Seeger cover “If I Had a Hammer” was then annoying me on WABC. But sure enough, Peter, Paul & Mary’s “Puff the Magic Dragon” was a smash by the time I began hitchhiking, and Lenny — who tells anyone who asks the truth, which is that all he knew about marijuana when he wrote that song was that it led to the harder stuff — was slightly rich. A physics major who’d always been good with both camera and typewriter, he landed an editing job at Popular Photography, where he decided that the “New American Cinema” Jonas Mekas kept raving about in The Village Voice was worth a story. So I accompanied him one Friday to a West 100th Street loft dubbed the Eventorium. Never a shy guy, Lenny was soon running the weekly screenings there, with me his faithful assistant — secretary, really.

Although the idea was to screen whatever came in off the street, Lenny made sure the Mekas pantheon was well represented. I respected without adoring the barely representational Dartmouth dropout Stan Brakhage — the placid smiles, distended grimaces, popped navel, slimy vagina, and meatloaf placenta of his childbirth short Window Water Baby Moving much more than the imagistic obscurities of his designated masterwork Dog Star Man. But I was captivated by multi-screenvisionary Stan VanDerBeek. VanDerBeek’s avant-gardism was so technophile — computerized,even — and so Pop. Dedicated to Chaplin and Keaton and driven by the looped instrumental hook of Screamin’ Jay Hawkins’ “I Put a Spell on You,” his animated-collaged 12-minute Breathdeath was by no means optimistic — it climaxed, in one of its cornier moments, with an A-bomb erupting from the Little Tramp’s Ben-Day-dotted head. But it had a wit Brakhage’s romanticism eschewed. Even funnier were our favorites, the eight-mm C-movie mock-epics of the Bronx-born-and-based Kuchar brothers, George and Mike: Lust for Ecstasy, I Was a Teenage Rumpot, the high-budget (i.e. 16-mm) Sins of the Fleshapoids, and many more. These were among the few narrative films we showed, and although their burlesques were even more teenboy than class clown Lenny’s wisecracks had been, they were also camp—both brothers eventually came out. Not that I knew what camp was yet. I just knew that this was pop and that it made me laugh like Tristram Shandy, e. e. Cummings, and Mister Peepers.

In a pattern that would become my norm, I sympathized in principle with the more recondite artists I encountered via the Eventorium — Kenneth Anger, Jack Smith, Marie Menken, a second Smith I think with a girl-group soundtrack, and others whose names I can no longer ascertain. (Bruce Conner’s A Movie, three cheers; Gregory Markopoulos, spare me I beg you.) So my magazine debut, entitled “A New but Muddy Wave,” was several cavils short of evangelical about Mekas’ “underground cinema.” As a pop guy, I preferred the narratively inclined picks of Mekas’ Voice protege Andrew Sarris, and in the underground went for VanDerBeek’s art-world Pop and the Kuchars’ amateur pop. I’d eventually publish two features about VanDerBeek’s multiple-projection “MovieDrome” space and one about the Kuchars, and even in the earliest of these was moving in on my journalistic goals: prose that valued edge as well as clarity and more ideas than outlets like Popular Photography normally preferred, although Lenny and his bosses never complained because journalism was opening up that way.

These goals I internalized as, sparked by nonpareil press critic Liebling, I became a journalism fan. In New York I’d traded in polysyllabic Chronicle sports columnist Charles McCabe and waggish Chronicle squib columnist Herb Caen for architectonic Post political columnist Murray Kempton and monosyllabic Trib Queens columnist Jimmy Breslin. I still followed the premier sportswriter of his era, the Trib’s Red Smith, and knew that the Post’s Al Aronowitz was occasionally covering pop music like the Chronicle’s Ralph Gleason. I was aware too that Norman Mailer was covering presidential politics for Esquire, and soon I’d suck down two collections of dauntingly deft Esquire profiles: Gay Talese’s The Over-Reachers and Thomas B. Morgan’s Self-Creations:13 Impersonalities. But Tom Wolfe, who I’d first noticed during my two months at the Tribune, was what I’d been waiting for: an American studies connoisseur with an appetite for pop and a baroquely in-your-face version of the word-mad, gag-prone Americanese I also admired in Macdonald and Liebling and Pauline Kael, who I’d enjoyed without knowing her name in the unsigned program notes of the Berkeley Cinema Guild. Every Sunday I scanned the Trib’s New York supplement for Wolfe’s byline. His reportage on Phil Spector, Murray the K, and the Peppermint Lounge, not to mention his irresponsibly scandalous takedown of The New Yorker’s William Shawn, all surfaced, like my two Popular Photography pieces, in the pregnant year of 1965.

Excerpted from Going Into the City: Portrait of a Critic as a Young Man by Robert Christgau, published by Dey Street Books, an imprint of Harper Collins, February 2015. Copyright © 2015 by Robert Christgau. Reprinted with permission of the Author; all rights reserved.