Welcome to SPIN’s Singles Mix! Once again, the SPIN staff has rounded up their favorite, must-hear tracks for your mid-week playlists. From confessional indie-folk to re-emerging American Idol legends to room-spinning psych-rock, these are the songs you need to know right now.

A Place to Bury Strangers, “We’ve Come So Far” (Dead Oceans)
Never ones to shy away from ear-splitting distortion and a James Cameron-worthy abyss of vocal echos, A Place to Bury Strangers return with the unexpectedly optimistic “We’ve Come So Far,” the second single from their upcoming fourth album, Transfixation. Thundering in with furious percussion, the Brooklyn noise-rock trio sings of accomplishing goals despite life’s challenges, weaving their words around a looping, prominent bass line that emulates Joy Division at their darkest. If this unanticipated pairing of murky orchestration and upbeat lyrics hints at their future endeavours, then clearly “So Far” is only the beginning. RACHEL BRODSKY 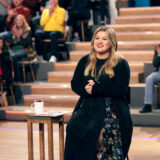 Kelly Clarkson, “Heartbeat Song” (RCA Records)
They say you’ll never know how much you’ll miss something ’til it’s gone, and that’s exactly what 2014 proved regarding Kelly Clarkson. Sure, we’re psyched she had a daughter, but her new single, “Heartbeat Song,” is a Greg Kurstin production that sparkles with newfound passion. “Up / Up / Up / Up / All night long,” the American Idol champ sings, popping each “p” sound with a bubblegum snap. We welcome the return of the queen. BRENNAN CARLEY

Matthew E. White, “Rock ‘n’ Roll is Cold” (Domino Records)
The title “Rock ‘n’ Roll is Cold” makes it seem like Matthew E. White‘s latest song is going to be a bit of a preachy scold. And while the lightly snarky lyrics accuse rock’n’roll of being soulless, White’s playful, laid-back strumming and songwriting are delightfully warm. He makes a bold claim, but it’s hard to get upset when it’s presented in such an earnest and charming way. JAMES GREBEY

Natalie Prass, “My Baby Don’t Understand Me” (Spacebomb Records)
The sound of Natalie Prass‘ self-titled album is about halfway between Angel Olsen and Jenny Lewis — whose band Prass played keys and sings backup for — if the two were competing for a slot on the soundtrack to a Nora Ephron movie. It’s a confusing amalgam of influences, and “My Baby Don’t Understand Me” is most perplexing of all: a grandiose five-minute statement of orchestral heartbreak, but one with such constantly shifting dynamics and such quivering vocals that it never lets you get the slightest bit comfortable. It’s a disconcerting listen for any number of reasons, but an enthralling one, challenging your expectations at every turn and giving you something richer for your troubles. ANDREW UNTERBERGER

Waxahatchee, “Air” (Merge Records)
Katie Crutchfield, a.k.a. the Alabama-born Waxahatchee, follows up 2013’s Cerulean Salt with a brand-new record (Ivy Tripp, out April 7) and an accompanying single called “Air.” Opening with offbeat bass drum beats and Crutchfield’s searching, ethereal “oooo”s, “Air” has the former P.S. Eliot singer wringing her wrists over a relationship’s future, singing, “It fogged up again / My liar’s remorse / We stand hand-in-hand / Idle in our course.” It’s exactly the diaristic plea we needed to slow down and have a good mid-week think. Welcome back, Katie. R.B.

Zara Larsson, “Wanna Be Your Baby” (Epic Records)
This teenage Swedish singer has the vocals of Rihanna on her brightest shining day, and on the first track from her debut Stateside EP, Uncover, she wields them with razor-sharp precision. The notes she hits should be illegal, and the emotion she injects into each trill brings heft to what could have been the otherwise rote pop track. Listen: If Rihanna is going to play with fans’ emotions by teasing #R8 for months on end, you might as well just listen to Zara Larsson’s finished, physical product. B.C.