He also talks about his alleged "feud" with Billy Corgan, and coining the term "grunge" 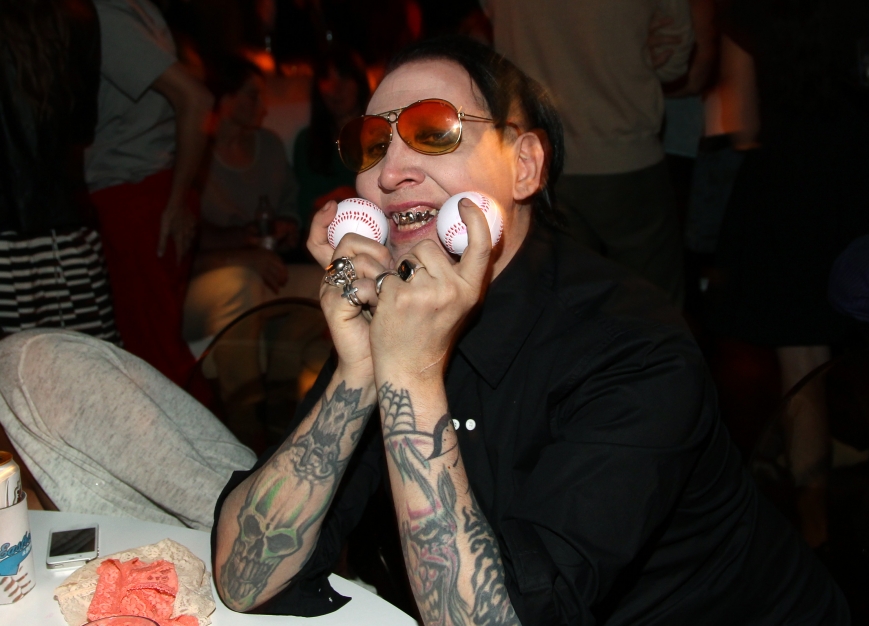 In a new interview with GQ, Marilyn Manson discusses his relationship with Courtney Love, as well as Billy Corgan’s advice to him regarding his one-time girlfriend, actress Rose McGowan. Though the shock-rock star had allegedly feuded with the Hole frontwoman — and recent Sons of Anarchy costar — in the past, he claims otherwise, in a backwards compliment of sorts:

We never really had a falling out. We’ve always been weird with each other, because she’s slept with pretty much every one of my friends, supposedly. Not me, though. She, one time, told me she was mad at me because I didn’t want to fuck her and I was smarter than her. I said, “Well, you kind of proved your own point right there on that one.” But it was cool. We didn’t work any scenes together [on SoA], but I saw her on the red carpet. Her dress broke, and I said, “You okay? Your pussy didn’t show, did it?” and she said, “No,” and I went, “Thank God! That would’ve been horrible!” That was the only time I fucked with her. Other than that, I’m cool with Courtney.

Last month, Manson joined the Smashing Pumpkins onstage for a performance of “Ava Adore” in London, leading people to believe that he’d buried the hatchet with Corgan. In that performance’s wake, the singer shared with GQ the words of wisdom that Corgan once offered in the late ’90s about Manson’s then-fiancé, Rose McGowan:

A lot of people think there was some kind of falling out. It was mostly that he wrote a strongly worded letter about how Rose McGowan would ruin my life and ruin my career if I stayed with her, which was good advice, and he wrote it as a letter, which is very polite. There is sort of a guy code that I abide by where he totally offered his advice, and he was genuinely just looking out for my best interests. I hadn’t seen him in 15 years. I had forgotten how close we were, having not seen him in so long. He’s the one who taught me how to play guitar, so if it sucks or it’s good, it’s his fault.

Oh, and about those headlines concerning Manson’s alleged control over the origin of the term “grunge,” he had this to say:

I think I actually wrote “grungy.” But it is pretty amusing that that became a headline. I’m like a Furby. You can push me, and then your sound bite comes out, and there you have your headline. So to clarify, I merely claimed that I popularized the word, which is pretty much not accurate, considering the distribution of the periodical that I wrote it in. But I like to self-aggrandize.

There you have it. Manson’s new full-length, The Pale Emperor, is available now.