Rejoice, festival fans, as this year’s Coachella lineup has been announced. Headlined by big-name draws such as Drake, Jack White, and AC/DC, the annual three-day, double-weekend festival will be held in Indio, California from April 10 through 12 and again from April 17 through 19.

This year’s bill goes heaviest on the electronic side of things, with EDM superstars like Kaskade, Axwell ^ Ingrosso, David Guetta, Madeon, Alesso, Nero, and more holding down the fort throughout the weekend. Stars who made names for themselves in 2014 also made the cut this year, including FKA twigs, Clean Bandit, Gorgon City, Kiesza, Hozier, Mø, and more. Other notable additions to the lineup include SPIN‘s 2014 Band of the Year Parquet Courts, Interpol, Azealia Banks, Ghostface Killah, Caribou, the War on Drugs, Florence + the Machine, Swans, Ryan Adams, St. Vincent, Jenny Lewis, Jamie XX, Panda Bear, Mac DeMarco, and more.

The festival has also brought onboard some smaller-billed but equally as exciting musicians for this year’s goings on, including recent CMJ star Ryn Weaver, SPIN Best Hip-Hop Album of 2014 recipients Run the Jewels, and art-pop crooner Perfume Genius. Check out the entire lineup via the festival’s just-released poster below. 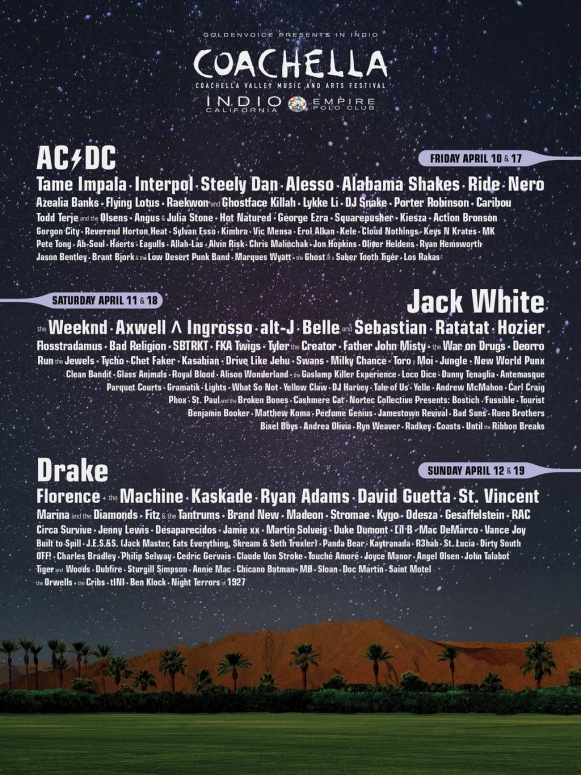