Q&A: Tegan Quin on ‘So Jealous’ and Tearing People’s Hearts Out

Tegan Quin doesn’t sound anywhere close to tired even though she’s been on the phone all day. The famously loquacious half of indie-pop sibling duo Tegan and Sara isn’t too wiped to share a myriad of memories about what it was like to record the band’s 2004 breakthrough, So Jealous, and how their career has evolved in the years since. “We created a connection between each record and allow it to work as a cohesive story,” she tells SPIN over the phone. “It’s been a really amazing experience.”

Now, a decade since the album’s release, the Canadian twin sisters — whose most recent LP is last year’s synth-soaked Heartthrob — are celebrating the tenth anniversary of So Jealous by releasing a deluxe edition of the record, titled So Jealous X, on December 23. The reissue includes a hardcover book of never-before-seen photos, plus a bonus disc of remixes, covers, and previously unreleased demos. In honor of the deluxe edition’s release, Quin spoke with SPIN about the making of the original album, going bowling with Meg White in 2004, and why she’s “not in the business” of pleasing anyone but herself.

What kind of memories do the songs on So Jealous bring up? Is the record about jealousy?
When Sara sent me “So Jealous,” I was shocked. The demo — which first comes out with the book — is really interesting to listen to. It was so dark. She moved away from Vancouver [to Montreal] a year prior to that, she was going through a massive break-up, she moved to a city where she knew no one, and she didn’t know the language. It was hard. Through that next year writing and recording So Jealous, she talked non-stop about the scene: Broken Social Scene, Arcade Fire, all of these huge bands. At this point, the groundswell was just starting. She was obsessed with the idea that we were outcasts, we were outsiders, we weren’t a part of any group, everybody was cooler than us. It was nonstop. It drove me crazy because I thought we were so cool. We were successful in my mind. We were playing in America, and we had been on Conan, Letterman. I didn’t understand her obsession with this world. I can remember being in the studio, finishing up the record, and going back and forth about what to call the record and her saying, “I think it would be really funny to call the record So Jealous.” Because people say it in jest or in joke, right? Like, I’m so jealous of your burrito. And she’s like, “It’s not a joke to me. I am jealous, I am so jealous.” 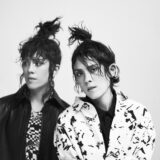 What’s your favorite song on So Jealous?
“Walking With a Ghost” and “So Jealous.” I’m really proud of a lot of the record because I think we made some pretty giant leaps. Listening to the demos, Sara really stretched herself, and it really inspired me. A song like “Fix You Up” or “Where Does the Good Go” was the beginning of me understanding song structure. Even songs like “Take Me Anywhere” and “Speak Slow” — even though they’re super basic — they were the beginning of me trying to write a basic pop song.

Some of the songs come across as more stream-of-consciousness, as opposed to your later work, where songs are more traditionally fleshed out.
I think people think that when you’re a musician, you know what you’re doing. I didn’t know what I was doing. I had never even considered verse, chorus, pre-chorus, bridge. Any of these words. I didn’t understand any of that stuff. I used all of the musical knowledge that I had from classical piano and guitar lessons for nothing. I unlearned all of that stuff to be creative. With our last record, I took so many meetings with some of the biggest producers in music. They consistently and emphatically shared this one piece of knowledge with me, this one insight, in answering one question which was, “Why aren’t we a bigger band?” They have the same fucking answer: We don’t like good bridges. [Our songs are] too short or too long or don’t follow traditional song structure. My instinct was to disagree with that, and then I went home and looked at [Heartthrob‘s] “I Was a Fool” and “Drove Me Wild,” and they didn’t have bridges. So I sat down and I carved out room.

I think our songs sound better [today] because we actually helped each other for the first time in our career. We complete each other. It’s what held us together for 15 years. It is not meant to downplay or minimize what we do individually. I believe that if I took ten years to become an individual, I would be great. But I’m not an individual, I’m a partner, I’m a duo, I’m a team member. I believe that So Jealous and all these other [records] are great, but when you compare them to what we’re doing now, it doesn’t compare because we are actually writing songs.

How did you react when the White Stripes covered “Walking With a Ghost” in 2004?
It was massive. It was probably exactly as you might imagine. We were out there on the road and some huge things have happened. We went from selling no records to selling thousands of records and gaining thousands of followers. We were on tour with the Killers, we got Coachella and Lollapalooza. Right at the peak, we got a call and saw a weird video of Jack White playing with “Walking With a Ghost.” They were going to put out an EP. Meg came to a show, and we went bowling with her. It was surreal.

Listening to the Walking With a Ghost EP, I feel really proud that Sara and I did something that affected people the way it did. This was the year that Franz Ferdinand, Modest Mouse, and the White Stripes were the biggest bands. There were no other women in the Top 30. I was proud that we did something by accident that had that impact.

What would the 2004 Tegan and Sara make of the reissue’s house-centric So Jealous remixes?
We would have loved them. [Initially, I wanted to] remix the whole album. [I said,] “Let’s do dance versions, electronic versions of every single song.” Party Ben, I believe it was — he was doing remixes back in 2004. He did a remix of “Walking With a Ghost,” we came across it in a record store — these were the days of bootlegs, there was a bootleg version of this song. It blew our fucking minds. I listened to dance music in the ’90s going to raves, here we were six years deep in our indie-rock career, some random guy made this, and we thought it was fucking killer. The first thing I thought was to take these pop songs that were so indie rock and make them totally different.

Since So Jealous, you’ve gotten some pushback for shifting from “indie-folk” to ’80s-influenced pop. Did you get a similar reaction when So Jealous came out in 2004?
Totally. I mean, let’s say we did [change]. Let’s say we went from from a banjo-twangy-harmonica-foot-stomping folk band to the band we are today. Who cares?! It’s this weird thing that the fixation over change. Anyway, no, I’m proud of it. It was neat looking back and creating this look back with this [So Jealous] box set because it was really fun to talk to the producers and the band and hear their stories. Our drummer [Rob Chursinoff] and I had a huge fight during the making of the record. When he came back into the studio, the first song that I played him was “Walking With A Ghost,” and he was livid. [He said,] “You’ve ruined the song by adding keyboards” and “It sounds so ’80s, why did you do that? It sounds like a pop record.” It was cool because it reminded me that with every record we’ve ever made, there has been resistance, there have been outliers who have felt that we were making a mistake. A lot of people felt alienated by that record; it wasn’t until mid-record when people wanted to get on board.

When Heartthrob came out in 2012, you spoke about writing from a more positive place. How has it been to revisit your darker material on So Jealous?
Our goal was [always] to narrate dark themes of heartbreak, renewal, rejection, and insecurity with really upbeat music. My goal was to remain that band that could tear your fucking heart out, but do it in a way that still felt commercial and accessible. Ultimately, I believe the same thing then that I believe now, which what we were doing wasn’t comparable to what anyone else was doing. And if we were to compare it, it should be to the emo scene, the metal scene, a scene that had a heartbeat, that was intense and moving and passionate. Moving forward, that remains a guiding principle for Tegan and Sara. If it doesn’t move me, it’s not going anywhere. All of our records had that to some degree.

To my ears, your sound shift has been gradual and was always based in pop.
Absolutely. What was neat about So Jealous was how it expanded our audience so quickly because of “Where Does the Good Go” on Grey’s Anatomy and the success of “Walking With a Ghost” on alternative radio. It’s neat that So Jealous can sum that long-gone era of when people loved records. Even though there were two big songs on the record, it’s not like people were only attached to those two songs. They loved the record. And the record itself as our first cohesive attempt at making a record.

Evolving your sound can be tricky because you’re in the business of pleasing people, but you also have to remain true to yourself.
There were a lot of bands that came to us in the last two years and said, “Geez, I wish we could’ve taken a risk. We made a record nobody cared about. We sold a tenth of what we did in the past. Our audiences are dying and dwindling. No one buys our merch. Everything you’re doing I’m into. I wish I could do it.” And I just look at them and say, “Well, do it!” [And they say,] “Oh no, we can’t. “We’ll alienate our audience.” Maybe you should alienate your audience! Maybe they’ll remember that it’s your band. I’m not in the business of pleasing anyone. I’m in the business of making music. I write songs, I tell stories. It’s in my best interest to make those songs and those stories appeal to people. But here’s the thing: It may not appeal to those same people who liked my band in 2002, and that’s a risk I’m willing to take.