The couple invited SPIN into their vibrant Los Angeles home 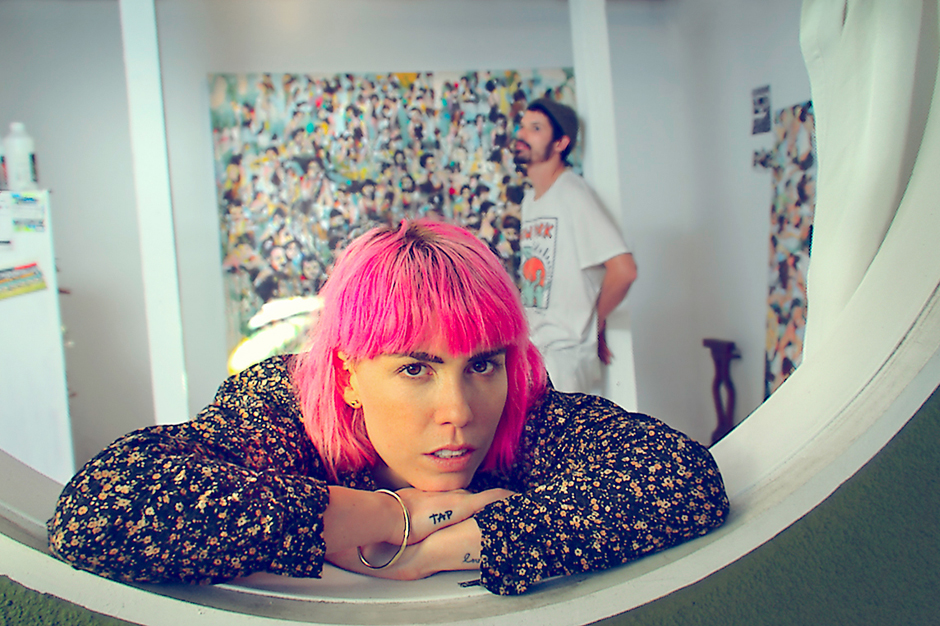 It’s been a whirlwind few years for Grouplove. Between recording, touring, more recording, more touring (this could keep going, but you get the idea), the road is more a home for the charismatic indie pop troupe than, well, their actual homes.

“We’ve been living in this house for two years now,” Hannah Hooper explained, standing on her porch overlooking Los Angeles’ Silverlake neighborhood, “and this is the first time we’ve actually lived here. I’m excited to finally get to explore LA.” She laughed, but it was clear she was ready for a bit of stability, if only for a short while. After intensive touring, the band’s taking a year-long road hiatus while Hooper and fellow Grouplove songwriter/beau Christian Zucconi try their hands at writing a musical score. After just settling back into their home, the couple was nice enough to invite SPIN into their house to check out Hannah’s invigorating art studio, inspect Christian’s ever-growing record collection and discover what fuels their inspiration (musical and otherwise).

Read on to experience an interactive photo tour of the couple’s house, complete with captions from Zucconi and Hooper themselves. We used a Lytro camera, so you can zoom and focus in on different elements of each image.

“The Morning Benders’ Big Echo is such a classic album and I am so stoked to have done the artwork for it.” — Hannah Hooper

“I love going on record store excursions and geeking out on vinyl. I just bought a real system that will last a lifetime. Now Hannah and I can finally build our record collection and have some time to listen to it. The used section at Amoeba can be a goldmine — I get lost in it.” — Christian Zucconi

“We go to a lot of art shows — we almost have a book for every show we’ve seen.” — Christian Zucconi

“This is my first breakthrough painting. It is of JFK. We wanted this to be our first EP cover because it represented getting to that next level in your art but to use his face for our cover every song on the album had to be about JFK or we had to get the okay from Caroline Kennedy to legally do it — neither of those things happened.” — Hannah Hooper

“Our guitar player bought this piano from a marine in Venice for $100 many years back. When he moved out of his spot he left it at our house. It had this awful wooden plastic finish on it so I bought this outdoor strawberry daiquiri oil paint and detailed it using white out pens. It took on this new personality. It was in our video for ‘Itchin on a Photograph’ and we brought it to the house. There is something about it that feeds creativity.” — Hannah Hooper

“This is the fun room — it’s my spot. I’m painting crowded waters. On tour I realized how claustrophobic I had become. I lived on a bus and was constantly surrounded by people. Then I started having dreams about crowds stuck in water, and these dreams are coming to life in here.” — Hannah Hooper

“These are my supplies I’m using for this painting. I used to dabble in graffiti when I lived in New York, so that’s a Krink pen that is incredibly toxic but the black is unlike any black I’ve found. I mix all my paint in plastic cups. Not really sure when that started but it stuck. ” — Hannah Hooper

“My sister and I made all these for our Leno performance — the producer told us to take them all down before we played but we left one up for moral reasons.” — Hannah Hooper

“This is a drawing of Christian [on the left] I did in Greece. It was the first time I was in the same room with him while he was writing a song. It reminds me how different we are and yet how close we are. [Drawing on the right] I drew this weird drawing of Tyler, The Creator while we were on an EU tour and met him when we were all playing a festival in Ireland. He signed it and told me some weird story about being attacked by dragons. I think he thought I was a crazy fan.” — Hannah Hooper

“This was the first guitar I smashed years ago when I was playing in my last band, ALOKE.  It was at Bar Niagra in New York. It was my birthday, and I was having a terrible night. I broke a bunch of strings and they told us we were done after four songs so I just lost it and broke it to bits. My girlfriend at the time was in the back lighting the candles to my cake and didn’t know what happened. She came out singing happy birthday so I had to stand there all awkward kinda smiling for what seemed like an eternity.” — Christian Zucconi

“My friend Paul who played bass in ALOKE started his own guitar shop and guitar line in Peekskill, New York called Division St Guitars — it’s in Pee Wee Herman’s family’s old building. The guitar company at first was called DeCourcey, after him, but then changed to Linden Guitars soon after, so this is the only ‘DeCourcey’ in the world. I’ve been touring with it for years. — Christian Zucconi

“We played Stoney Brook in Long Island on a college tour. We opened for Ludacris. The show was on a football field, so everyone was like 20 feet away from stage in the bleachers, and what a funny lineup, Grouplove and Ludacris. We played our show and are being kind of shy, then Ludacris comes on and says, ‘How many ladies wax their pussies nice and right for their guys?!’ and told each side to yell ‘fuck you!’ We suddenly felt all prudish. After the show he dipped and left a trail of Reese’s Pieces all the way to the gate.” — Hannah Hooper