From Jason Aldean to Drive-By Truckers, these were the year's best shit-kickers and tearjerkers 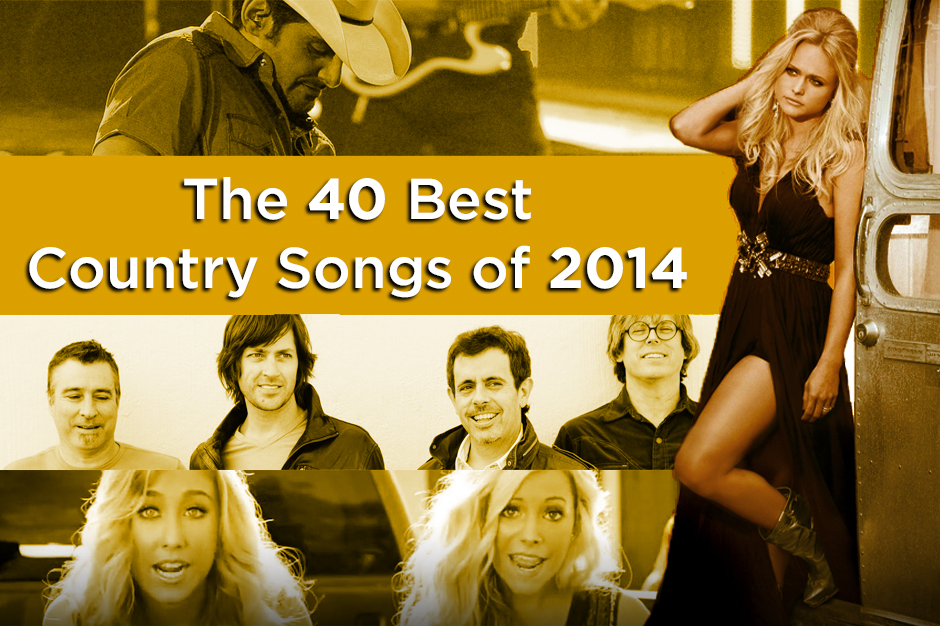 This year was an unexpectedly big one for country, with different luminaries fighting to reclaim the genre for what they believe to be the greater good: Mekons’ long-suffering Jon Langford delivering an always-astute war report, Brad Paisley sneaking a protest for equal pay onto his bro-country album, and Eric Church’s sincere plea to exorcise his hometown of, well, exes.

But then we have the newcomers: Maddie and Tae’s titanic “Girl in a Country Song” skewering any male singer who opens his truck to them, Eric Paslay taking worthwhile liberties with the calendar, and 21-year-old Kira Isabella capturing what few songwriters (or any other kind of scribe) could: the dark side of small-town life and how the legal system favors men. And the greatest country artist of our age released her biggest album yet, even if it didn’t really go Platinum. From “Dirt” to “Mud,” here are the songs we aspire to get drunk on a plane to.

Bro-country pioneers who count a “Life Is a Highway” cover as one of their career highlights, Rascal Flatts have a decade-long headstart on the younger guys getting bored with their limitations. They may yet come up with something more ambitious than listing the night’s activities and putting “re-” in front of them (i.e. “Re-spin you around / Replay that sound of you laughing,” etc.) so they can “un-kiss your lips and kiss ‘em again,” but if this is the closest these eternal cornballs ever come to biting Nas, we’ll take it. DAN WEISS

This top-of-the-line country ballad is nothing new except for the fact it’s by the woman behind the best-selling song of this century. Long one of the great cross-genre pollinators, Shakira’s excellent Blake Shelton duet shows pop-country the same care and melodic justice she did Afropop and hard rock, adding another tune to the classic canon of love-over-whiskey songs. Only in American pop is she still underrated, which puts her in good company with the metric system. D.W.

The surly guitar lick brings to mind nothing so much as Michael Jackson’s “Give in to Me.” That chorus? Think of it as a plea for Brantley Gilbert’s partner to use him for sexual experiments not often spelled out in country or anywhere else. Gilbert saves the sex for his girlfriend and the love for his bros, which don’t mean he don’t want her to bring it on down and fill his cup. It’s too bad he wasted the title “Dirt Road Anthem” on the banger he wrote for Jason Aldean — this is the real thing. ALFRED SOTO

Road sagas litter country/rock byways, and a maudlin institution it is, right down to microphones stinking of beer and wimmen who just can’t understand. Here’s a cowpunk burner from one who knows better. Our antihero’s no wonder, just one step above a lounge act, packing them in at the Holiday Inn, mouthing the words to other people’s songs. Craig Finn quivers over bloody strings while Cory Branan allows the subject his hard-won nobility — “It is what it is.” Hardly a portrait of courage, but there’s no sneering here: Branan knows that chump could be him, or us. JASON GUBBELS

Alt-country as a lovely lost ’70s AM radio staple, down to the Randy Newman-like piano noodling that bookends the song, the mid-track whistle break and the lyrics that seem to get confused as to whether they’re about a girl, a song, or a girl literally trapped inside a song. Helen Reddy would approve. ANDREW UNTERBERGER

In this gentlest of Bro Anthems, a softly pulsing piano and metronomic acoustic accompany the South Carolinian’s familiar litany of the ways men beg off letting down their guard: I’ll never settle down, love’s never come my way, and nope, I don’t dance. Soon, that stiff-armed defensive pose relaxes some as the chorus reveals a man more than ready to waltz. It’s grand schmaltz in the manner of all worthy monogamy tributes, and when Brice played an essentially solo version to a hushed Opry audience earlier this year, you’re damn right he dedicated the performance to his wife. J.G.

The Americana-inclined have been praising Cary Ann Hearst and Michael Trent since their railroad-spiked debut single, “Gasoline,” but who knew they had this in them: a doo-wop, 1950s-style R&B throwback singing the praises of intravenous heroin use? Don’t let the Mother Goose lightness of rhyming the title with “schism,” “realism,” and “prison” fool you: These shovels dig deep. D.W.

33. Hunter Hayes, “You Think You Know Somebody”

The highlight of this 23-year-old wunderkind’s second album was the impressively blistering “You Think You Know Somebody.” Hayes is more incredulous than heartbroken throughout his depiction of his ex’s betrayal, bitterly observing contradictions in action and behavior before revealing the smoking gun: “If you love me like you said you did / Well, you’d still be standing here.” Then comes the dueling-guitar outro, which aims for “Free Bird” and makes a noble effort trying. Never let it be said that country’s youth is lacking in ambition. A.U.

One of the best story songs to dominate country radio this year was Keith Urban’s tale of youthful malfeasance by proxy, a winning account of getting busted for trespassing and falling for the accomplice as she continues to make the situation worse. “Cop Car” hits on the teenage holy trinity: rebellion, anxiety and horniness. And it keeps a sense of humor about the situation in retrospect (“You tried to sweet talk ‘em / They didn’t fall for it, but I did”). Co-writer Sam Hunt liked the song enough to snag it for his own album as well, but Urban’s starry-eyed delivery is what makes the song — you can hear him smiling and shaking his head at the memory as he sings, “Your father’s gonna kiiiiilllll meeeee….” A.U.

31. Little Big Town, “Quit Breaking Up With Me”

Bet you didn’t know how much you needed a Lynyrd Skynyrd/ABBA mashup, but here it is, the singsongy rebuttal to Taylor Swift’s “We Are Never Ever Getting Back Together,” complete with middle-finger gesture and makeup sex. True, the sex is barely hinted at (“making out,” yeah right), and the quartet can’t quite risk country radio’s ire by rhyming “do it” with “bullshit.” That’s OK. Leave the heavy lifting and cussing to Miranda Lambert, LBT. Just keep giving us more turns of phrase like, “We’re on and off again / Like sobriety.” J.G.

Miranda Lambert Is Hitting the Road in 2020 for Wildcard Tour: See Dates