Album of the Week, SPIN Essentials

In a decidedly low-key year for rabble-rousing rap, long-cranky stalwarts El-P and Killer Mike return as the incendiary duo Run the Jewels just in time to throw rocks at “pussies who lack a purpose.” Last year’s sturdy debut Run the Jewels had a purpose all right — it solidified a not-as-weird-as-it-first-seemed alliance between indie rap’s primary dystopian cynic and mixtape rap’s premier man-on-the-street reporter. But it was a skeleton compared to its meatier, just-released sequel, which might be both rappers’ strongest effort ever.

Killer Mike has had more bombastic moments on record — particularly his last one, R.A.P. Music, which was also produced by El-P and celebrated for its uncaged analysis of Reagan and police brutality among other things. But has he ever rapped so intricately, with kudzu-like internal rhyming (“I’m looking lurking on bitches twerking for service”) and Jenga-winning syllable-stacking (“The gates of hell I’m pugnaciously pacing, waiting”)? The pleasures aren’t all complex: On “Angel Duster,” Mike psychotically grins “I kill my masters” over a beat that incorporates the unmistakable sound of a clinking glass, a literal toast to the uprising.

His sardonic foil’s production retains its tough sourness, but it also hasn’t been this rich in years. You can’t understate Death Grips’ influence here, repopularizing turgid noise in beatcraft until even Yeezus himself had to bite. With respect to one-of-a-kind marriages like the wah-wah weirdness of “Lie, Cheat, Steal” and the dubby “All My Life,” which steals decaying drums from DJ Shadow’s “Monosyllabic” and sonar blips from Radiohead’s “Packt Like Sardines in a Crushd Tin Box,” it’s those soon-to-retire anarchists who renew El Producto’s faith in glass-gargling noise. 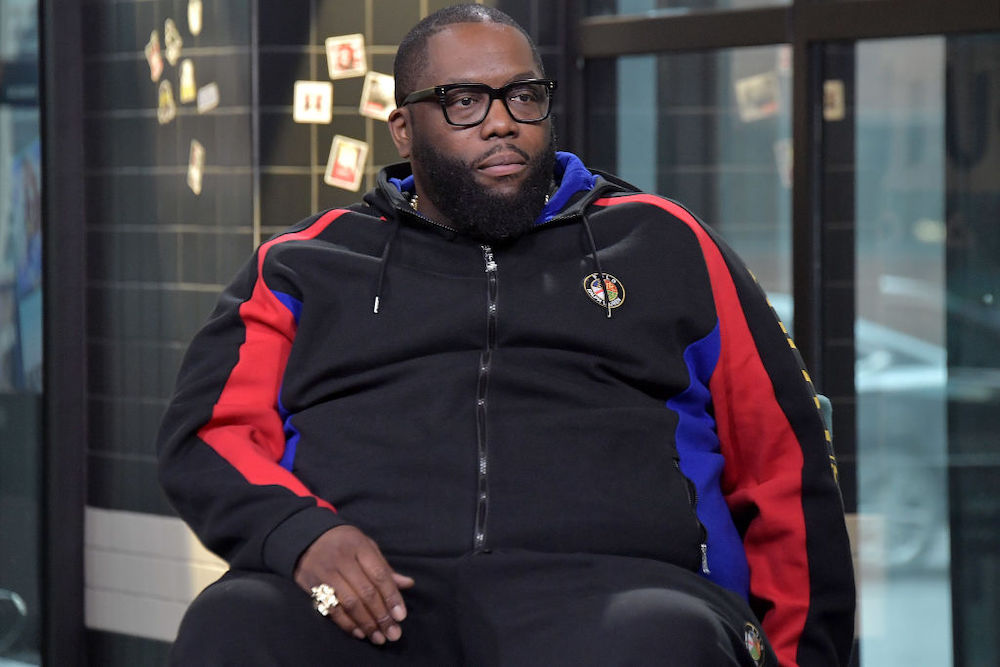 “Oh My Darling Don’t Cry” scrambles voices that swirl down the drain and “Close Your Eyes (And Count to Fuck”) distorts a curling bass noodle until it resembles a distant explosion in a diamond mine. But what RTJ subtract from Death Grips in marble-mouthed danger, they make up for in Mike’s skills: an unmatchable dexterity and clarity. He’s a human cinderblock that demands to be thrown through a Wall Street window.

Which is not to miss 2‘s developments in subtlety and humor: Listen closely and you’ll hear an actual cuckoo clock to punctuate Mike’s “the clock is cuckoo” line on “Blockbuster Night Part 1” (in which he deftly rhymes with “Shaka Zulu” and “beaucoup”). Later, MVP guest Zack De La Rocha yells “Fuck the slo-mo!” before seguing into the album’s slowest song. No longer can this pair be accused of being too serious.

Which is why the most welcome surprise on Run the Jewels 2 is the timely maturation of the duo’s sexual politics, from the truest line El-P has ever written (“The fellows at the top are likely rapists”) to the entirety of standout cut, “Love Again.” This Akinyele remake sounds inauspicious at first, as the duo takes turns bragging about a new conquest with “dick in her mouth all day,” then slowly lowers the cringe factor of commands like “spread yourself” by juxtaposing them with the less objectifying “I think I’m in love again.”

But the stroke of genius is bringing in Gangsta Boo for a career-peak verse (“Keep it ratchet, so sweet/ All these boys kiss my feet,” “Let’s have an orgy/ I’m a share your ass with all my friends”) topped by a triumphant change to the chorus: “I put my clit in his mouth all day/ I’ve got this fool in love again!” It takes a lot to upstage a De La Rocha verse, but fucking was never these firebrands’ strength, and suddenly they’re competing with “Anaconda” for the funniest sex-positive jam of 2014. “Down with the shame” goes the next track, “Crown.” Hell yeah.

For truth in advertising we get the nonchalant “got an average of being excellent” and Mike’s celebration of his own new unlocked potential: “This Run the Jewels is, murder, mayhem, melodic music!” he exclaims. For a dude who’s never quiet, he doesn’t sound even close to getting hoarse.