MØ On Avoiding Perfection and Linking Up With Diplo 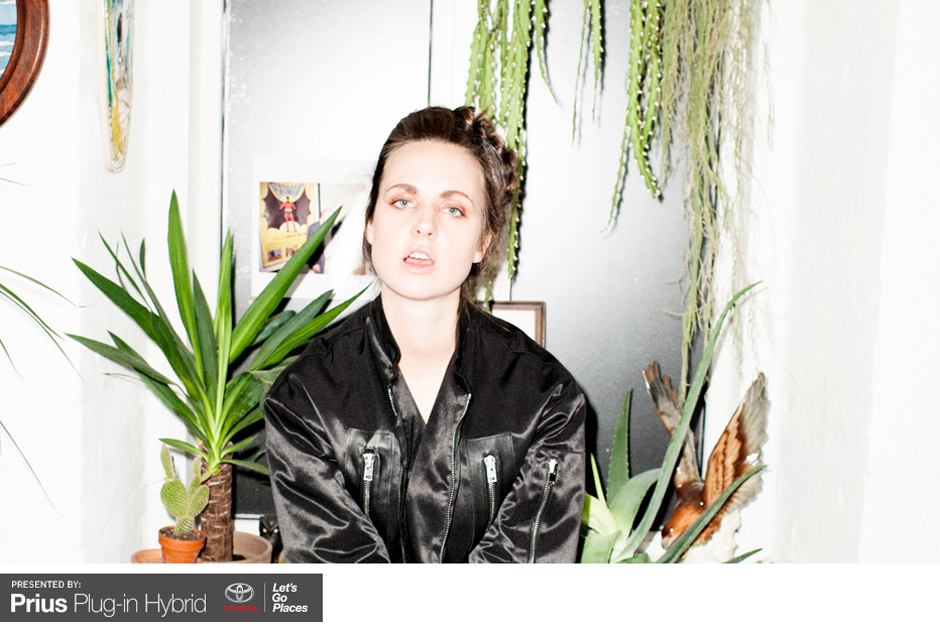 Danish singer Karen Marie Ørsted isn’t coy about her broad view pop. It trickles down from all of her favorite music: She’s romantic about Sonic Youth, citing Thurston and Kim as the ultimate lovelorn couple, and looked to the Spice Girls as the feminist girl-squad icons of her youth. She mines the idea of a rotating, unclassifiable grab-bag of personality from the latter as well, bringing the more accessible fronts of punk, dance, and feminine, no-bullshit lyricism to her own music. After her 2011 release of “Glass,” a snarky, anthemic song laced with sex-craved nostalgia, Ørsted found herself working alongside Avicii (“Dear Boy”) and Diplo (“XXX 88″). And like Robyn and Icona Pop, the anthemic Scandinavian vocalists she’s compared to most frequently to, she delivers the sentiments behind her emotional turmoil in a way that’s both plainly stated and loud. “It’s important for me to hear honesty in my vocals when I hear them back,” she tells us. “I am looking to capture those moments that can’t be perfectly recreated. If you want to even try to recreate them, you need to do so as passionately and fiercely as you can.” Those ephemeral feelings are rooted in her debut release No Mythologies To Follow, a collection of songs about love, growing up, and finding yourself. And with her current American tour, the singer looks to translate those glowing, whimsical feelings of hope live. We talked to Karen about her musical influences, avoiding perfection, and linking up with Diplo.

Where does the name MØ come from?
It means to be a female child; a pure, unspoiled little girl. I think a straight translation is kind of like “a virgin” but this is more a reference to being pure and young.

It’s not about being chaste.
No, it’s much more about a kind of innocence.

The title of your album No Mythologies To Follow feels like it comes from a similar aesthetic idea.
Yeah, it’s obviously about being young and lost and confused and trying to find your own path in the world. It’s a rejection of others’ ideas. Social media and the media are telling you what to look like and how you should be and it’s horrifying to be perfect. Everyone tries to be perfect and that can really mess with your brain, especially when you’re young and insecure. I want to say that we have no real guiding line, we have to find our own way. Nothing can be perfect.

Is that something that translates to your music? Are you satisfied with it when it’s done?
The thing is that the times in my life where I’ve tried to be perfect, I’ve failed miserably. So I know that perfection is not an option for me. There are some things that I’m very specific about. Small things; when it comes to being honest or conveying something honestly, I strive for perfection in that. When I am doing the vocals, I want to be able to hear what I was feeling while I was recording it later as it is playing back. A feeling can never be perfect and recreating a feeling can never be perfect. It’s a moment and that’s what you want to show with your music. That’s where I become very focused on catching something that’s perfect.

When you say you tried to be perfect and failed in the past, what were you referring to exactly? Anything specific?
It’s like when you try to overdo something and you lose what’s real about it in the process. It’s like when you’re so in love with a guy and you’d do anything to get him — that’s when you won’t get him. It’s about striving to be something you’re not. That’s when you’ll kill yourself because you lose yourself in that process.

Do you find yourself getting compared to other Scandinavian artists?
Yeah, I do. I think that in Scandinavia we have a lot of spare time because the government would save our ass no matter what. So we have a lot of time to do our hobbies and explore self-discovering in a way that other places don’t.

Were your influences Scandinavian? There’s a lot of punk mentality and sound behind your music. Who were you listening to?
Yeah I listened to a lot of Black Flag and Dead Kennedys. Sonic Youth were my number one all-time favorite and still are. They soundtracked my teenage years. Kim Gordon was and still is my number one role model of all time. She was definitely the female role model of my time, I think. Apart from my mother, she was the woman I looked up to. My mom and dad were worried about my being being a punk sometimes, because I was very rebellious as a teenager, but they were very supportive of me and music.

Have you forgiven Thurston Moore?
No, no I haven’t. It was such a shame when they broke up. They were the dream couple, the one that all of us thought would last forever. So sad.

Coming from a punk background, how did you end up using those influences to make pop?
You know I was in that environment for so many years. It’s not something I think about, it’s just something that happens. My producer Ronnie was introduced to me by my manager. We clicked; the first song we did together was amazing and now we’re good friends so it helps that we share a vision.

You’ve worked with other producers as well, right? How did you get involved with Diplo?
It all started because of a tweet, actually. I did a video for a DIY magazine in the U.K. and one of the questions that they asked me was who my dream collaboration would be with. I said Major Lazer. So some guy tweeted at Diplo and said, “Please make this happen!” Diplo wrote him back and said, “I love her!” So me and my manager contacted him and we were so excited that he wanted to work on some music.

What was the most memorable show you’ve played?
I played at Webster Hall in New York and it was so amazing; such a positive vibe in the room with so much good energy. It blew me away that this small Scandinavian girl could play a sold-out fucking Webster Hall in New York City! When you start making music you don’t know if anyone will like it at all, and it’s good to feel that there are others who care and show you that with their energy too.