Gawk Over Guitar Art For a Good Cause

Fender Strats hand-painted by Ryan Adams, Brandon Boyd, and more are on display

This year marks the 60th anniversary of the Fender Stratocaster, and you’re invited to celebrate while supporting a good cause. As previously reported, the guitar OGs are teaming up with surf staple Hurley to auction off no fewer than 20 unique takes on the iconic instrument. While the bidding is happening via eBay, the hand-painted guitars will be on display  Friday, October 24, 6 p.m. to 10 p.m., at 1945 Placentia Avenue in Costa Mesa, California. The Hurley headquarters will play host to a night of art, live music, and more, with all proceeds going to Waves for Water.

As also noted, the axes were decorated by a wild list of design-minded people. One of those — skateboarder and musician Ray Barbee — will perform live accompanied by surf-jazz duo the Mattson 2. Other artists who’ll be in attendance include Rancid’s Tim Armstrong, Incubus’ Brandon Boyd, Christian Jacobs of the Aquabats, psych-pop painter Tim Biskup, car-tist Albert De Alba, tattoo genius Tokyo Hiro, graffiti guru Cryptik, painter Natalia Fabia, and skate kings Christian Jacobs and CR Stecyk. SPIN is co-presenting the night in honor of the classic guitar born in 1954.

Waves for Water is a Southern California-based non-profit devoted to providing clean, drinkable H2O to communities in need around the world. Often working with surfers and a team of likeminded volunteers, they’ve successfully set up filtration systems in in Haiti, Indonesia, Bali, Pakistan, Samoa, and Chile thus far, plus accomplished many more smaller-scale feats in the process. Take a look at, and place a bid on, the one-of-a-kind Strats on eBay now. 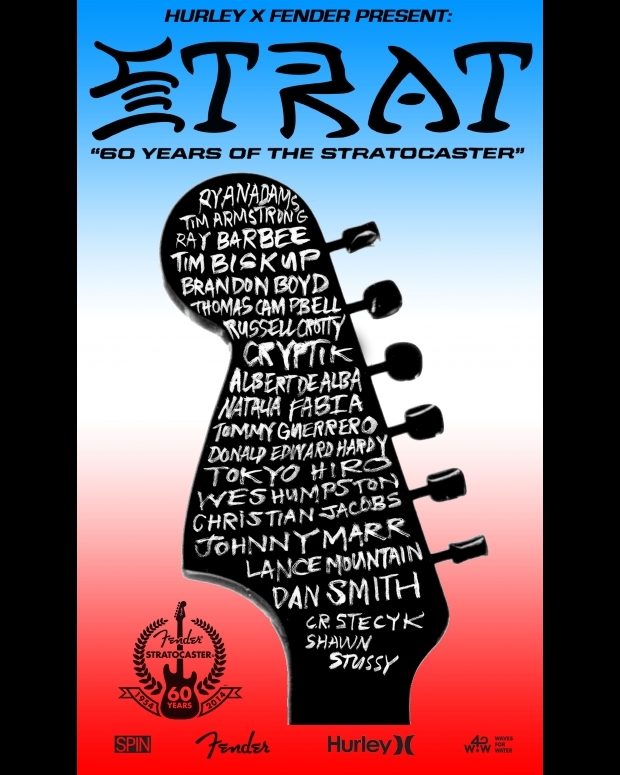