Foo Fighters Celebrate ‘The Feast and the Famine’ at Home in D.C. 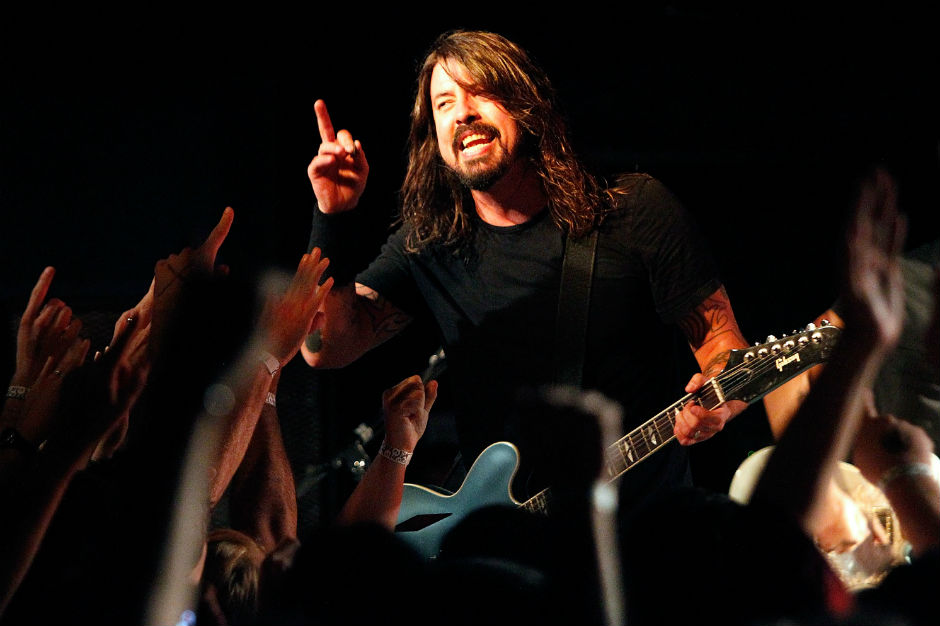 It’s a strange and wonderful profession to play in a rock band, especially one as successful as Foo Fighters: long tours, late nights, thousands of fans showing up all over the world to watch you play their favorite songs. But the experience is steeped in isolation: early soundchecks in skeletal venues, stolen naps backstage before the club swells with life, a few hours of immortality before hopping on the bus and doing it all over again in the next city. It’s all too easy to lose a sense of identity — a sense of home — while on the road.

So what’s a band to do upon arriving home? Throw a party.

Last Friday, the Foos did just that at the gritty 700-person capacity punk club Black Cat in Washington D.C., with a special screening of the D.C.-area episode from their HBO docuseries Sonic Highways.

The episode features the band returning to the home that Dave Grohl considers to be his musical birthplace. “The experiences I’ve had in this city, from the age of 14 years old, set this foundation for the rest of my life as a musician,” he said. “The community, the support, the love that was here in the D.C. music scene has carried over into what I do now. The way that Foo Fighters work now, we’re like a family, and we try to treat everyone that way.”

Grohl credits cutting his teeth in D.C.’s hardcore scene while learning some of the values that have helped Foo Fighters achieve longevity and success. “The message wasn’t ‘We are rock stars and we are better than you,'” Grohl said. “The message was ‘We are people and we’re all in this together.’ I got that from Washington D.C., and it makes its way into our music.” The band pays homage to the nation’s capital on the recently released “The Feast and the Famine,” a D.C.-inspired song recorded at Inner Ear Studios in Arlington, Virginia.

Foo Fighters took the stage at Black Cat following the screening for a special midnight show that coursed through the band’s extensive catalog and honored some of their predecessors. The show opened with “Something From Nothing,” the Chicago-inspired first single from Sonic Highways, before leading into 2006 hit “The Pretender.” The crowd went wild; beers spilling and bodies bouncing deep inside the belly of the club. The mood lightened as Grohl smiled and paused to absorb the scene for a few seconds.

The band continued with longtime favorites “My Hero” and “Learn to Fly” before breaking up the nearly three-hour set with a series of covers. Grohl showcased impressive vocal range during Queen and David Bowie’s “Under Pressure,” while the band seemed to enjoy themselves as much as the crowd, each feeding off the others’ enthusiasm. Tom Petty and the Heartbreakers’ “Breakdown” showed a surprisingly smooth side of the rockers, and Van Halen’s arena-rock classic “Ain’t Talkin’ ’bout Love” had a rollicking Taylor Hawkins nearly out of his seat on the drums.

The band reclaimed their catalog with a breathless performance of “All My Life,” as the crowd joined Grohl and Hawkins in some intense headbanging. “Hey, Johnny Park!” and “Times Like These” allowed a breather for both band and audience — the show had been going on for about two and a half hours at this point— and showcased the band’s adaptability and skill at transitioning from powerhouse rock anthems to more delicate songs.

The softness didn’t last long. The Foos played breakthrough single “This is a Call” — complete with an “Eye of the Tiger” intro — before the live debut of “The Feast and the Famine.” Grohl’s eyes shone under a mane of sweat-soaked hair as he roared “That night they were burning for truth / Down on the corner of 14th and U,” which references the 1968 riots in D.C. following the death of Dr. Martin Luther King, Jr. Both Grohl and the crowd seemed to acknowledge the song’s local and historical significance, the event having occured nearly half a century ago but only a few blocks away from Black Cat.

Foo Fighters closed the show with “Best of You” and “Everlong,” with as much intensity as they began about three hours earlier. Grohl thanked the crowd and the city saying that he still considers himself a D.C. rocker before going back stage. Maybe you can go home again.