Pink Floyd Preview ‘The Endless River,’ an Album 20 Years in the Making

More than two decades after the release of Pink Floyd’s last album, The Division Bell, the band suddenly finds itself amidst a rollout for a new release called The Endless River. Below, you’ll find a 30-second clip teasing what’s in store. The album art (above) and track listing (below) for the new effort are out too, and drummer Nick Mason says the LP also functions as a “tribute” to keyboardist Rick Wright, who died in 2008.

The four-sided album is entirely instrumental save one song called “Louder Than Words,” which has lyrics by guitarist David Gilmour’s wife Polly Samson, according to an announcement earlier this week. It was produced by Gilmour, Roxy Music guitarist and producer Phil Manzanera, Killing Joke founding member and bassist Martin Glover (a.k.a. Youth), and previous Floyd recording engineer Andrew Jackson.

The album is due out November 10 and, as Consequence of Sound reports, was created using old, unreleased tracks laid down by Wright. The brief clip released features a slick, laid back Gilmour guitar solo over the sort of dense soundscape one might except from the prog icons.

Gilmour explained in a statement: 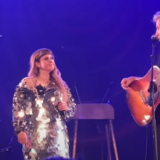 The Endless River has as its starting point the music that came from the 1993 Division Bell sessions. We listened to over 20 hours of the three of us playing together and selected the music we wanted to work on for the new album. Over the last year we’ve added new parts, re-recorded others and generally harnessed studio technology to make a 21st century Pink Floyd album. With Rick gone, and with him the chance of ever doing it again, it feels right that these revisited and reworked tracks should be made available as part of our repertoire.

Mason adds, “The Endless River is a tribute to Rick. I think this record is a good way of recognizing a lot of what he does and how his playing was at the heart of the Pink Floyd sound. Listening back to the sessions, it really brought home to me what a special player he was.”

The Endless River is available for pre-order now. Listen to the clip here, with track listing below. Otherwise, just hold your horses until November and maybe revisit the Flaming Lips’ Flaming Side of the Moon if you’re getting impatient.