With the Summer of Ass seeping into autumn, we’re reminded once again that pretty much any time you critcize a pop star, you’re going to get some crap. The latest person to stir up controversy is tough-as-nails singer Brody Dalle, who had the nerve to tweet her feelings regarding Jennifer Lopez and Iggy Azalea’s just-a-bit-butt-heavy “Booty” video, not to mention the song itself and Chris Brown’s involvement in it.

She started off by writing, “I think JLo and iggy azalea have lost their heads up each other’s big butts,” then followed it with, “I’m trying to understand what the point of their horrendous video is but I can’t find one,” and “The song is a piece of crap that was written by waaay to many people including a well know woman beater.” (The track does, in fact, have 10 writers.)

Lopez and Azalea have yet to comment on it, but one of Dalle’s fans replied to her, saying, “Well done. Your rants have inspired lots of girl hate and slut and body shaming” and called out Brody’s adoration of Wendy O. Williams, the Plasmatics singer who often performed topless with only electrical tape covering her nipples.

So, that led to Dalle, who released her first solo album this year after stints in Spinnerette and the Distillers, to post a lengthy defense/explanation on Facebook. She praises both Lopez and Azalea’s “beautiful and life giving” bodies but worries about their intentions in making this song and video. “My problem with this song and the video is the conflicting message it’s sending to our impressionable young girls and boys. How are the lyrics ‘give him what he asks for’ empowering to women? How? How is spreading your bottom apart and singing ‘give him what he asks for’ empowering at all?” 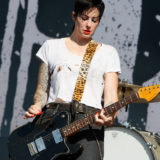 She goes on to say it’s a symptom with the music world at large: “It has become a contest of who gets the most hits on youtube and vevo and who can take it the furthest, not about the quality of their songs and the messages they are sending. And why? To make lots of money and to line the pockets of the big machines, regardless of who that affects.”

The note can be found in its entirety below. It’s definitely worth a read.

Slut shaming? Body shaming? Girl hating? Please dont assign incorrect motives to my tweets. It is you who is implying they are “sluts”, not me. The definition for slut is “a woman who has many casual partners”. Since when did being scantily clad come to mean having many casual partners?

I don’t like the word slut, I don’t use the word slut, that word is not in my vernacular. If a woman has many casual partners, it is none of my business. I have absolutely no problem with what women do with their bodies in their private lives. Women should feel free as men do to sleep with whomever they want to as long as it’s consensual and with out being labeled a slut. That would be equality. (A girl can dream).The trendy term “slut shaming” is inadvertently calling scantily dressed women “sluts”. We should all stop using it.

My problem with this song and the video is the conflicting message it’s sending to our impressionable young girls and boys.

JLo and Iggy may feel empowered by their bodies and that’s fine, their bodies ARE powerful, beautiful and life giving. But they are so much more than just their bodies. They may feel that using their bodies is the only currency they have in order to stay popular and on the top. It has become a contest of who gets the most hits on youtube and vevo and who can take it the furthest, not about the quality of their songs and the messages they are sending. And why? To make lots of money and to line the pockets of the big machines, regardless of who that affects.

I want my daughter to grow up knowing that she is more than just the sum of her “body parts”. I want her to feel valued for her brains before her body.

This is a conflicting and confusing time in culture. I think about these things a lot. I worry for future generations about where we are headed as a society. There is so much to discuss and talk about and I invite the conversation because it is an important one.

There are many cans to be opened and not everyone likes worms. We have yet to define the parameters and boundaries and it’s hard to do so but we should all feel free to speak up with out feeling like we are going to be attacked, condemned, called crazy, told we are slut shaming, body shaming or girl hating for our opinions.

This notion that I can’t have an opinion or disagree with what someone is doing or saying is ludicrous. Especially when I feel it could impact women, men and children in a negative way. I am far from perfect and I have made many mistakes trying to find my way — but I will continue to stand up for what I believe in and to make this world a better place for all children, women and men.

And Kayla, if you want to twerk your life away naked on a website, feel free, it’s your life. But just know I might think you could do so much more…….and that’s okay, right ?

p.s – Wendy O was destroying female stereotypes in a time when it really fucking mattered, when it was probably scary for her to do so. She was brave, strong and unapologetic. I respect her very much.