At this weekend's Boston Calling Festival (the fourth in 18 months), thunder and lightning threatened to overshadow the weekend's stellar lineup. But save for two canceled sets — Volcano Choir and Girl Talk, who would've performed during Saturday night's evacuation — the weekend was a smashing success. Lorde brought her brand new tour setup out for a spin; the War on Drugs got audience members swaying back and forth in the breeze; and Nas was joined by the Roots to for a hit-stuffed Sunday set. Check out pictures and recaps of the weekend's most exciting performances ahead. 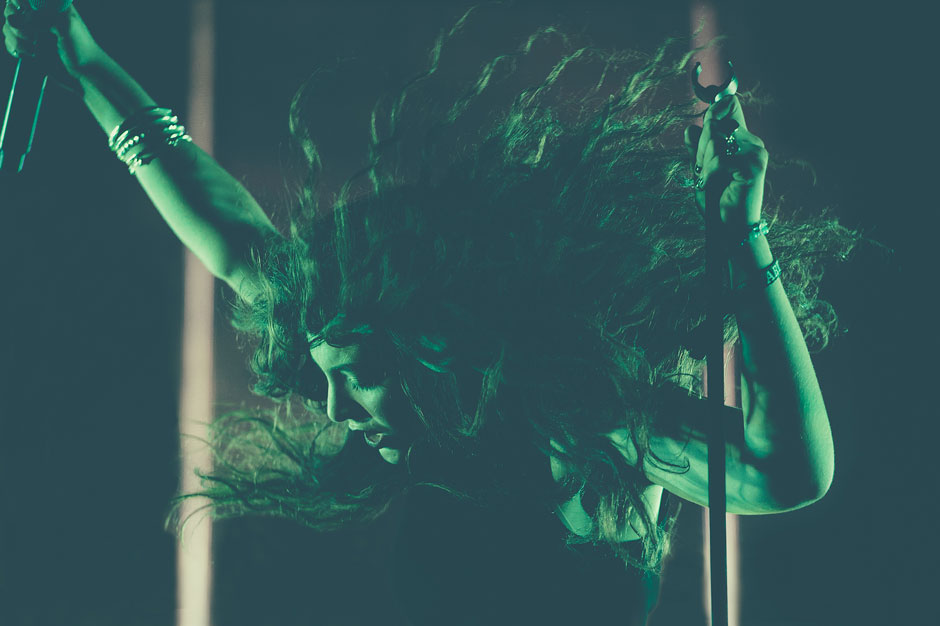 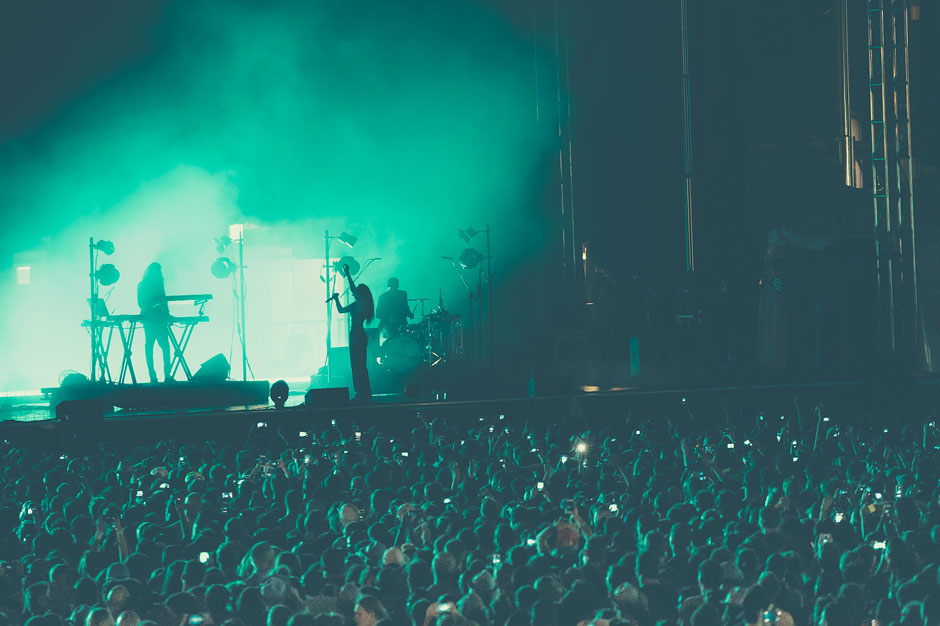 The "Royals" singer came minutes away from cancellation after festival organizers wisely ushered attendees out of City Hall Plaza with the news that a lightning storm was approaching the area. Although the weather claimed Volcano Choir and Girl Talk as its victims, fans found their way back in due time for a highly original, deeply physical headlining set by the Grammy-winning Lorde, who worked her way through her small but powerful catalogue in 50 minutes. "Boston, what you've done here tonight was magical," she said with gigantic tears in her eyes as she stood before the thousands of screaming fans in the middle of what was only the second night of her brand new tour, with the visuals, lighting cues, costumes, and song rearrangements of a seasoned veteran. Bow to Lorde and accept her reign. 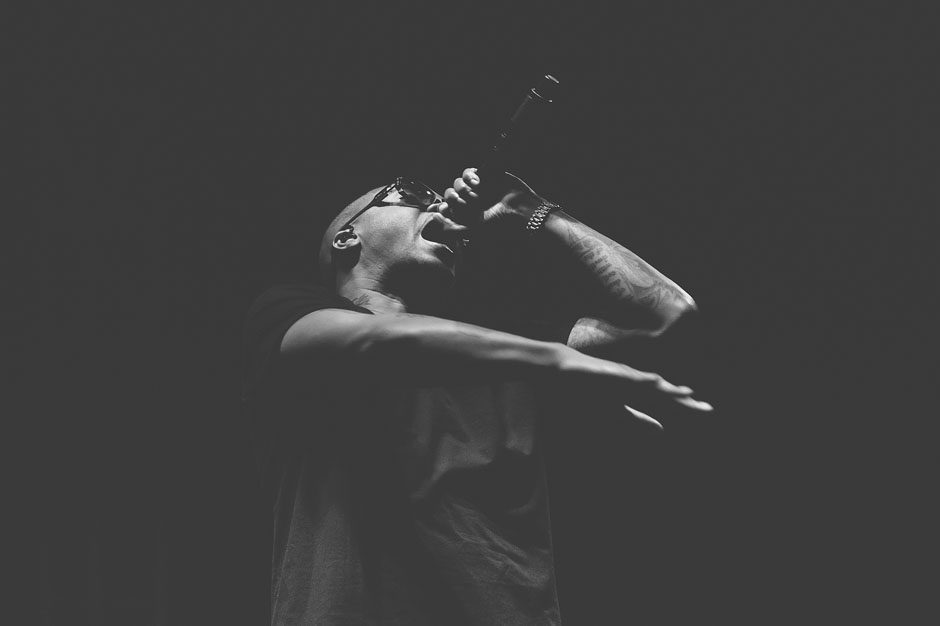 "In the past, I've said hip-hop is dead, but tonight in Boston, it's very much alive," Nas said during his career-spanning set to close out the weekend's festivities. Running through hits like "Made You Look," "I Can," and Illmatic classics too, the rapper demonstrated very clearly just how electricifying hip-hop can be no matter the setting. 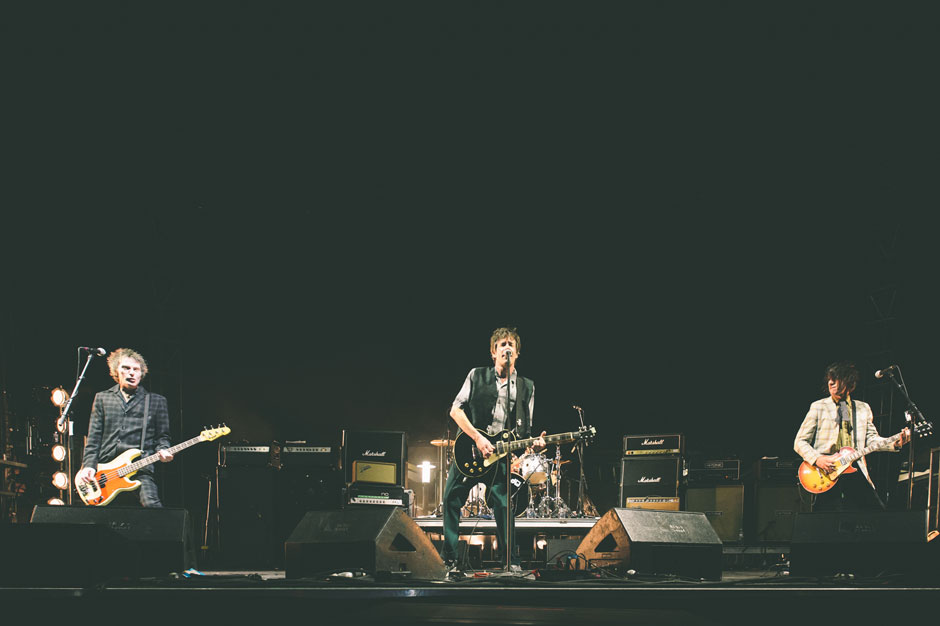 In the natural order of things, festivals tend to get a little sleepy on their final night, especially what with Boston Calling's massive Saturday heatwave and subsequent hours-long evacuation. The Replacements couldn't have given less of a fuck about how tired people were with a blistering set that dug deep into the band's early albums. "I smell weed you fuckin hippies," Paul Westerberg shouted mid-set. "Back in the day, the drugs you take, nobody smells." The crusty punk band demonstrated their vitality throughout their hour-and-change slot, trading covers ("I Want You Back" by the Jackson 5) with classics ("Chilton"). Spoon's Britt Daniel said it best earlier in the day: "Isn't it time for some new Replacements material?" 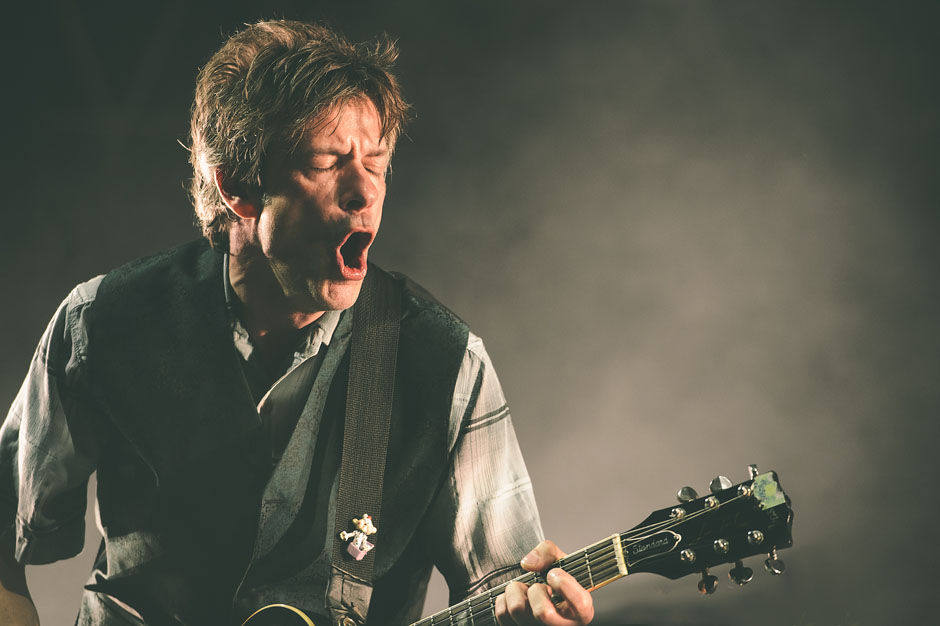 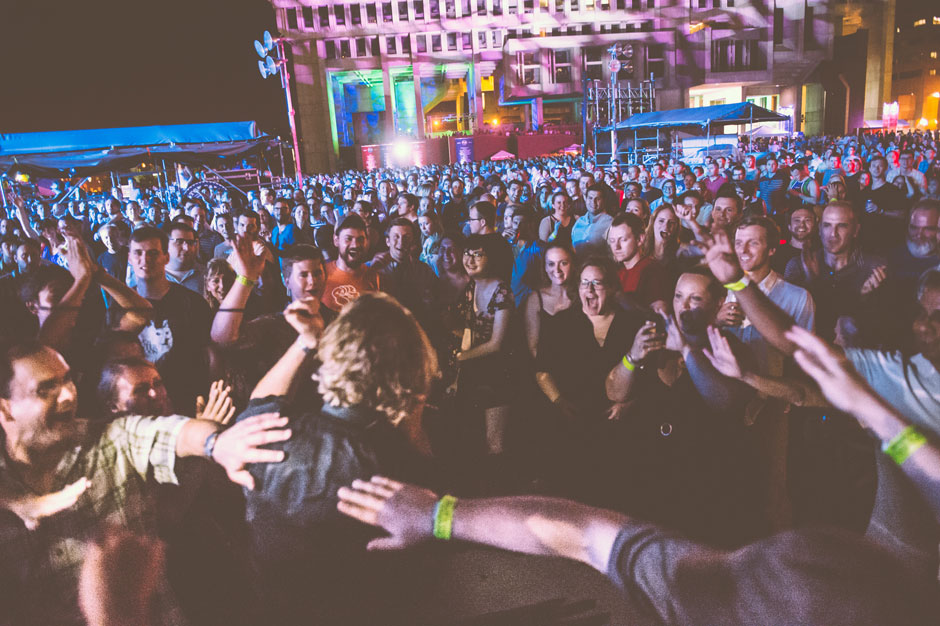 This is one reporter's bias, but the National are the country's greatest dad-rock band currently touring. Singer Matt Berninger has perfected that pained, scrunched-up "I'm emoting!" face in concert, but what brings this band a step above the rest is the way they throw themselves full force into even their quietest numbers. It's always a feat to behold: in small clubs (like their SPIN anniversary show at New York City's Terminal 5 in 2010), massive arenas (yes, even Brooklyn's Barclays Center), and outdoor 45,000-strong festivals, the National truly, deeply rock. Their 19-song headlining set on Friday night (highlights: the tinglingly good "I Need My Girl" and Boxer cut "Ada" with a Sufjan Stevens "Chicago" outro) only cemented that. 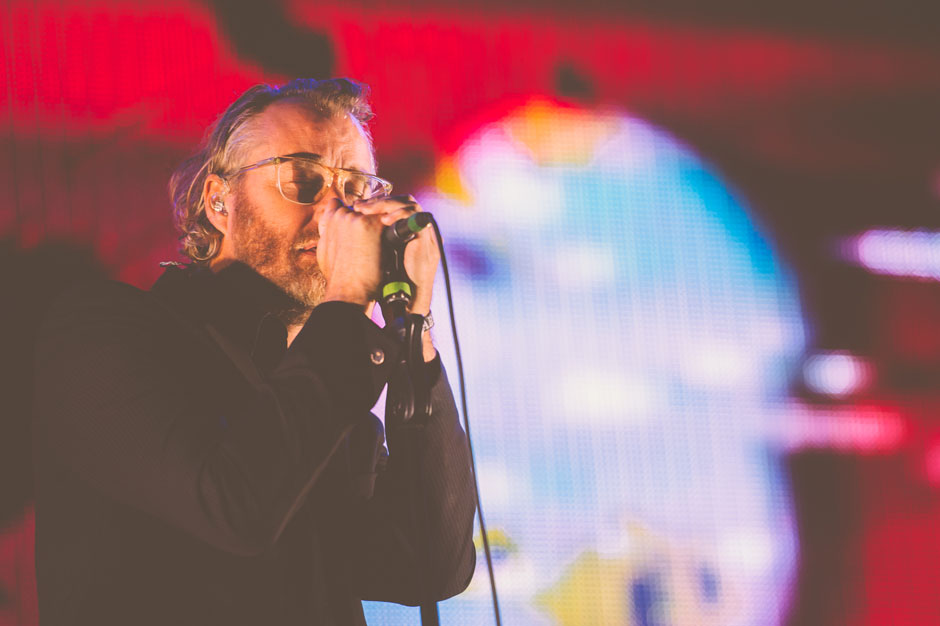 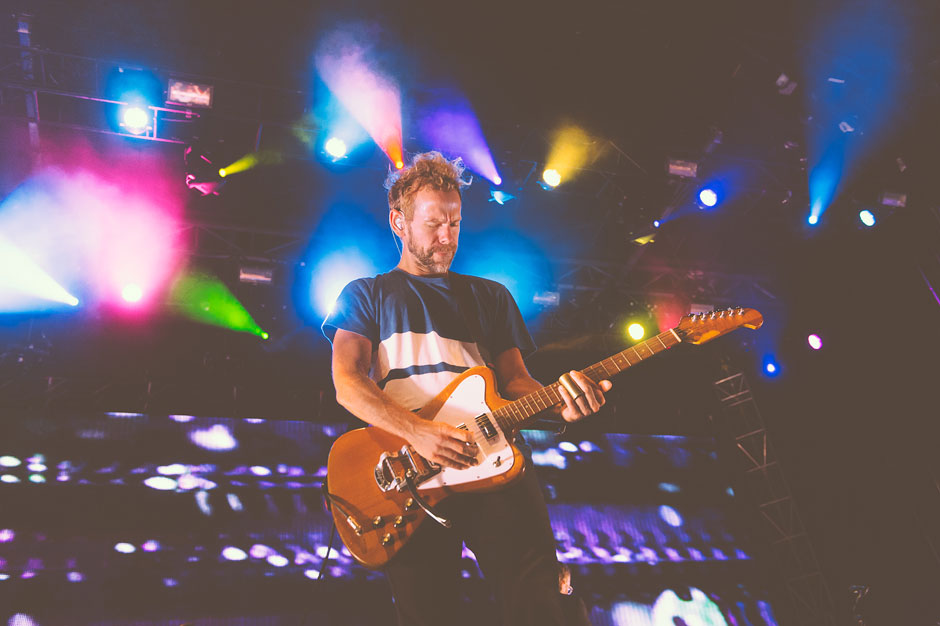 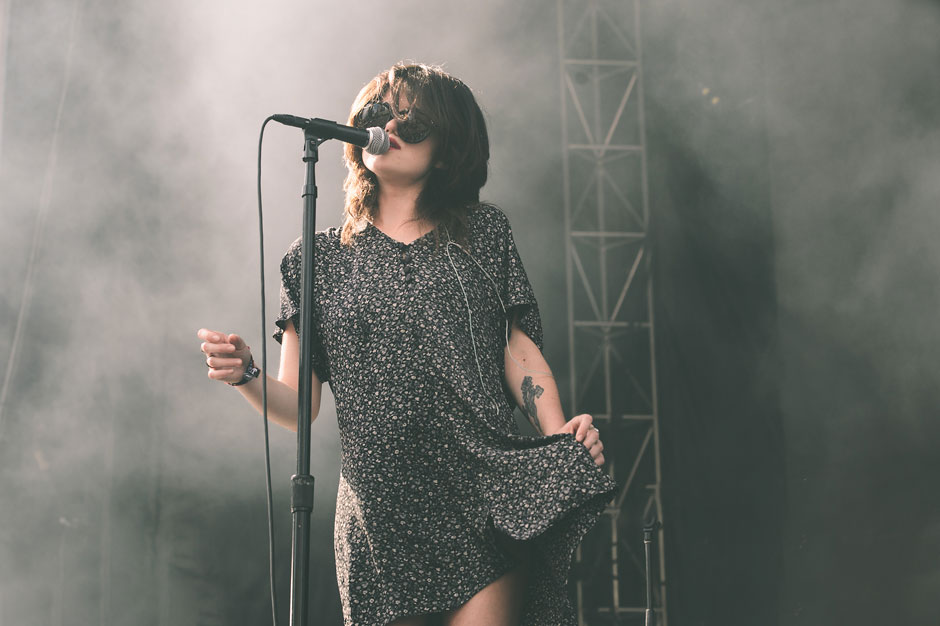 Last fall, Sky Ferreira played a disastrous live show at Webster Hall following the release of her major label debut Night Time, My Time. She spent most of that night crawling around on the floor, mumbling half of the lyrics, and forgetting the rest or slurring at her band. At Boston Calling, that version of Ferreira had been flushed away in favor of generally consummate professionalism (save some jabs at the sound crew for missing some cues) and stellar vocals. It was encouraging to watch the singer pout and headbang her way through an abbreviated but exciting mid-afternoon set. The crowd predictably lost its mind during "Everything Is Embarrassing," but My Time cuts like "Boys" and "24 Hours" worked wonders on converting those unfamiliar with Ferreria. 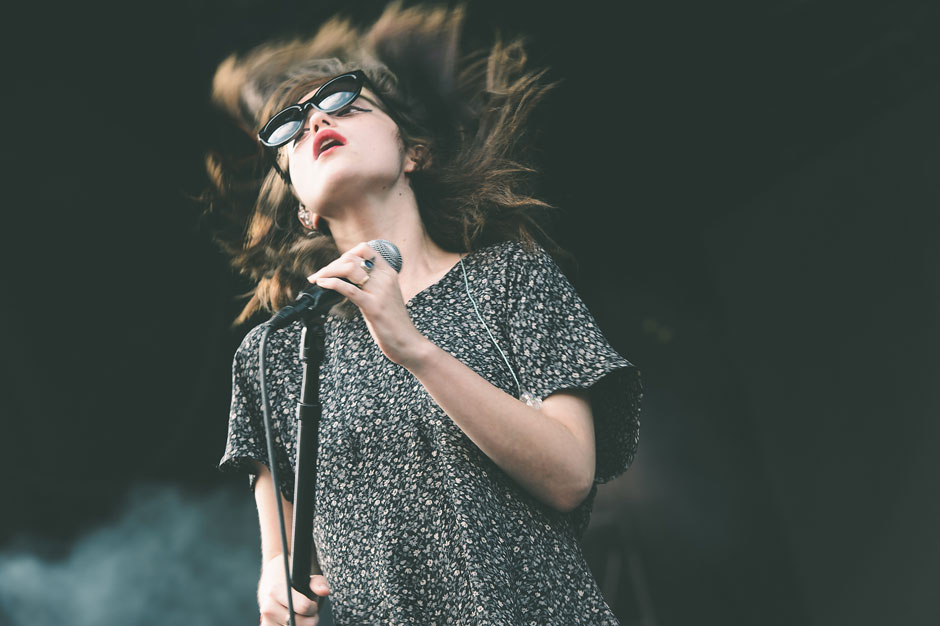 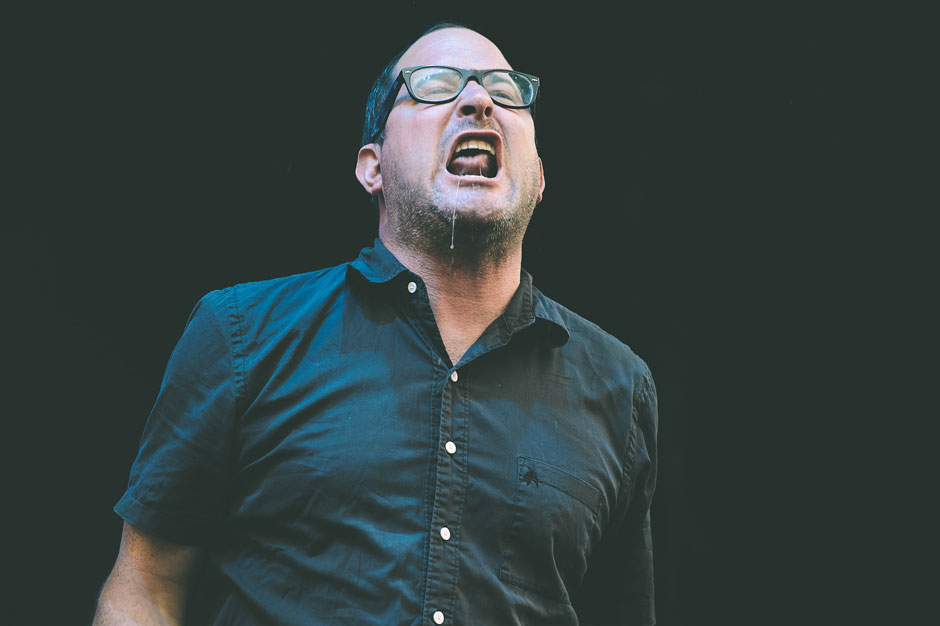 The Hold Steady had the unenviable luck to fall between peformances by the high-octane Bleachers and what would've probably been the quiet brilliance of Volcano Choir. Nevertheless, the Brooklyn band kept fans dancing in City Hall Plaza right before Boston Calling shut down the shows until later that evening. 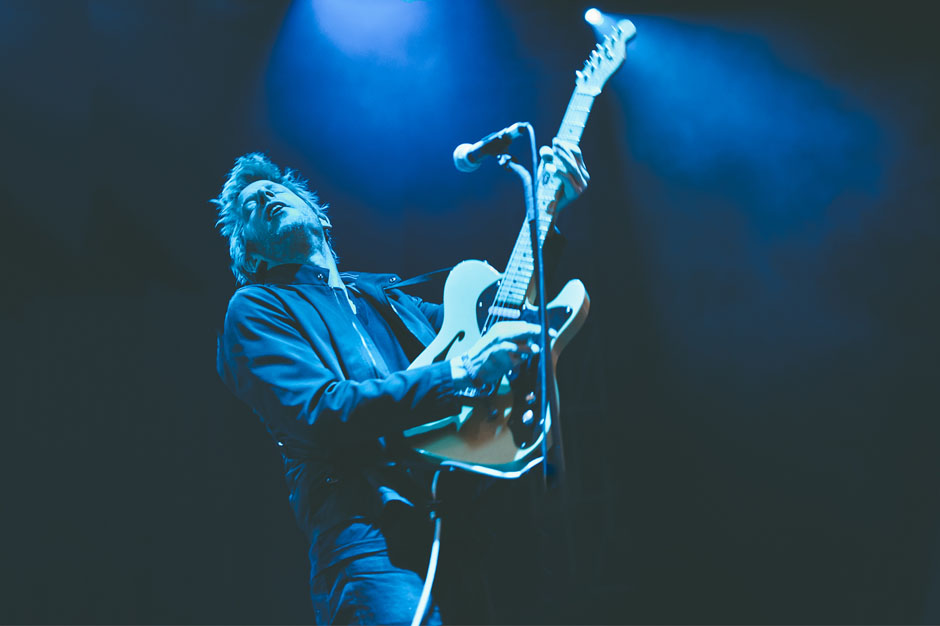 Spoon's new record, They Want Your Soul, is one of the most fully realized albums released this year. The thing about seeing Spoon live, though, is you have to catch them on a good night. Boston Calling saw Spoon on what must've been a somewhat off night, or perhaps the crowd wasn't throwing the band the right response. Whatever the case, Spoon started off strong with "Small Stakes" and "Rent I Pay," but lost steam as the set went on. Not even their biggest hit, "The Underdog," caught people's attention. "I don't even like this song," one bystander muttered before shuffling over to the Replacements' stage to secure a spot. 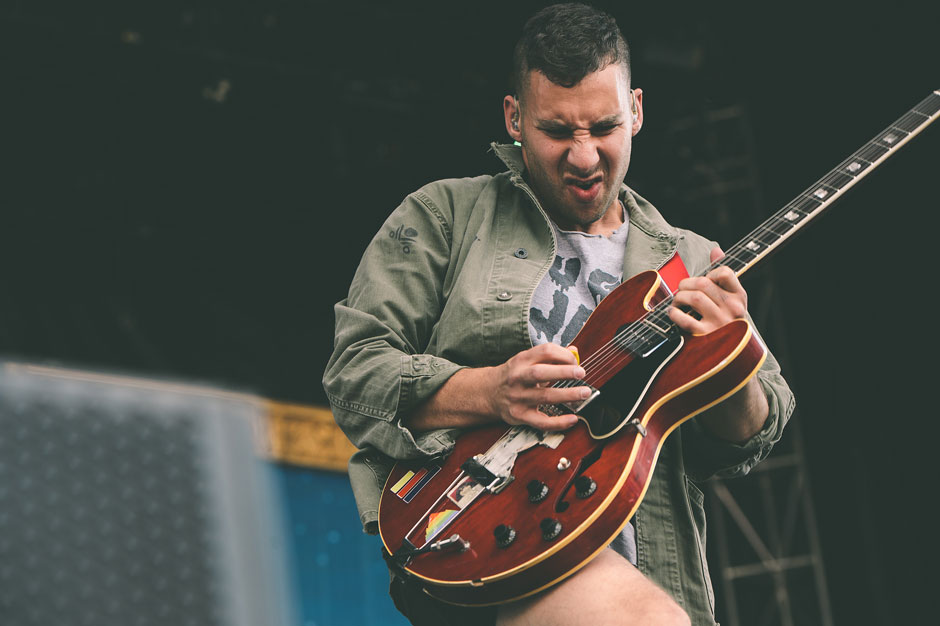 Ten songs were all it took for Bleachers' to convert tens of thousands of fans. They've been hitting the road hard in support of their debut album Strange Desire this summer, and each festival stop has shown sharpened chops, bigger smiles, and more crowd support. "We love this festival because they're letting us play a longer set than usual," lead singer Jack Antonoff told the crowd in the sweltering mid-day heat on Saturday. That meant the inclusion of a Cranberries cover ("Dreams"), the band's Grimes collaboration ("Take Me Away," which sounded stronger live than it does on the record), and familiar cuts like "I Wanna Get Better." Turns out this fun. guy is a helluva frontman in his own right. 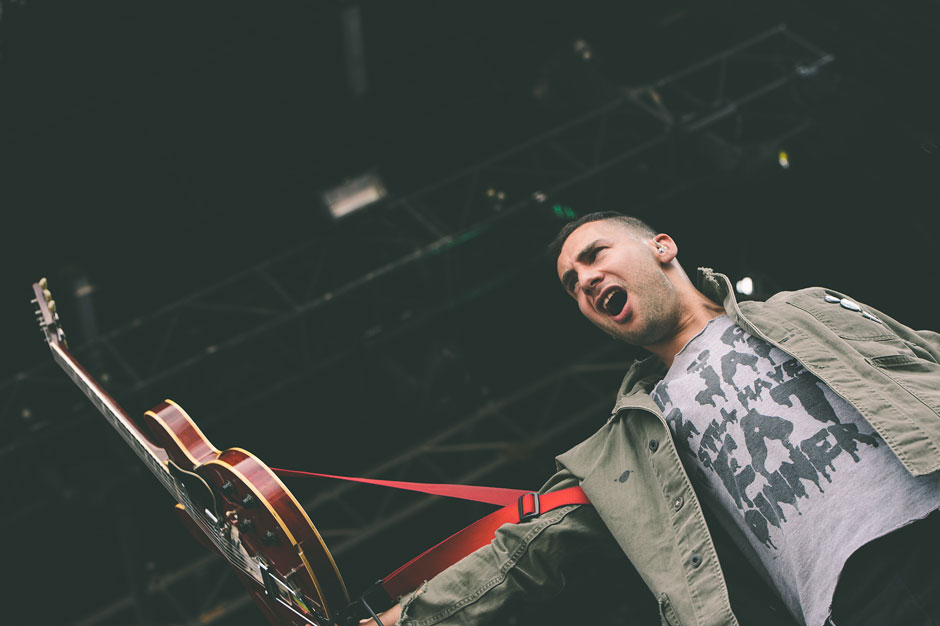 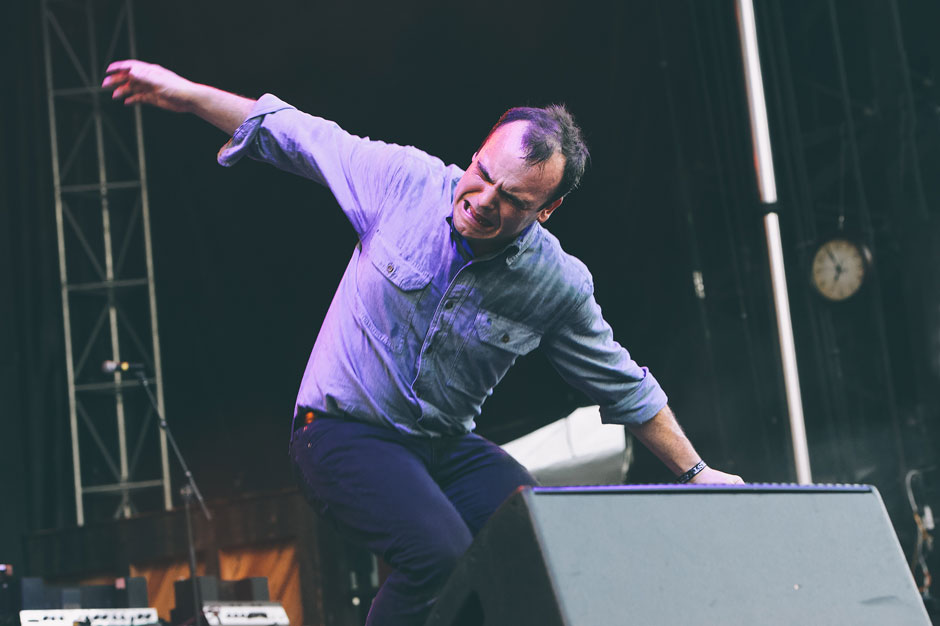 To be chosen to open for Neutral Milk Hotel and the National — as Future Islands were on Friday night — you've gotta be doing something right. The band kept it short, sweet, and incredibly animated, closing with "Vireo's Eye." Keep on dancing, you delightful weirdos. 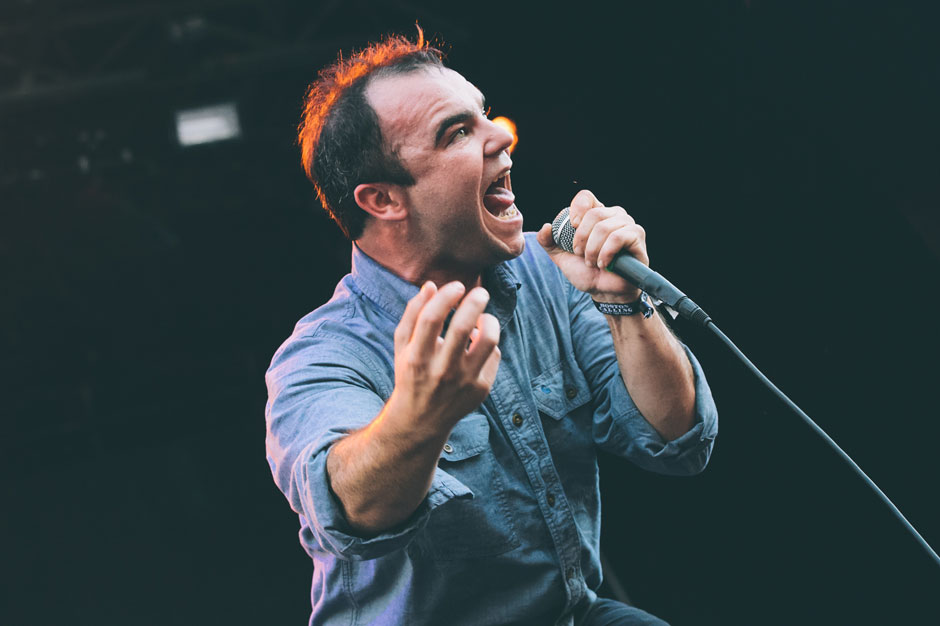 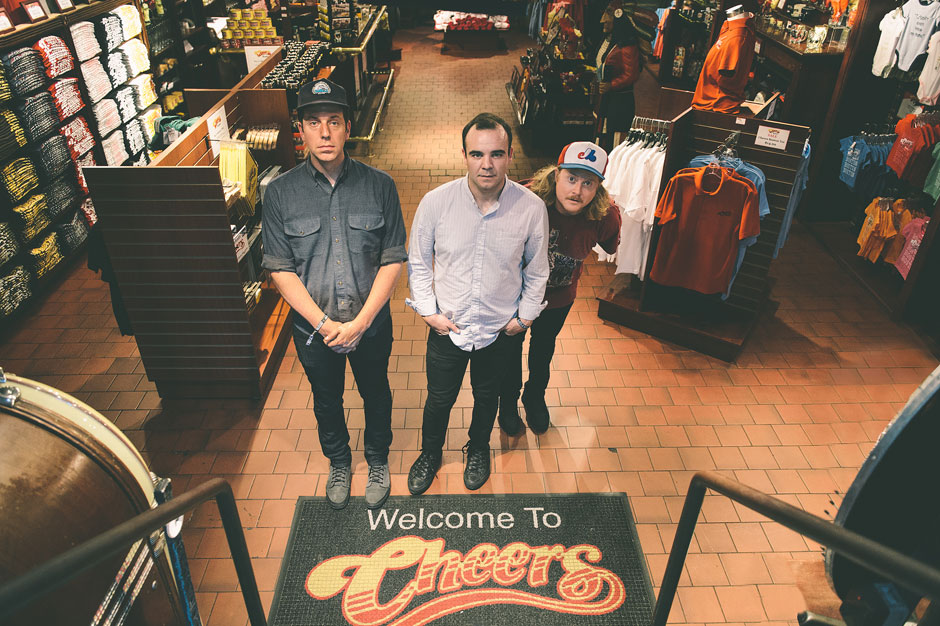 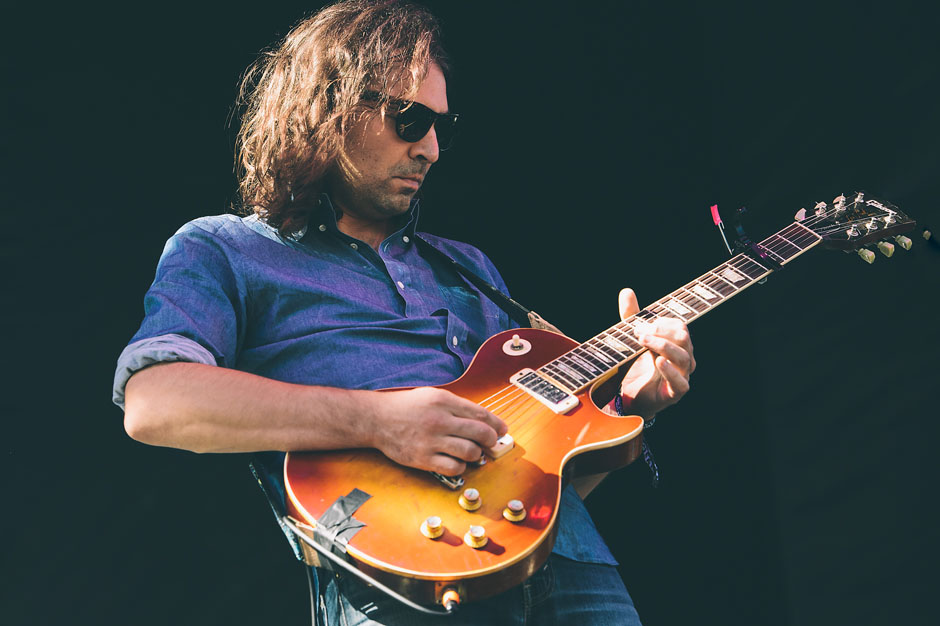 Though Saturday was packed with pre-pubescent single-day-only ticketholders, presumably there for Lorde and Childish Gambino, Sunday's attendance skewed far older because of the Replacements' return to Boston. It was wise, then, for the fest to stock the Sunday lineup with an assortment of much more mellow bands like the War on Drugs, whose seven songs sprawled across the plaza and lightly gripped even the most passive listeners. Keeping the stage banter to a minimum, the group unpacked songs including "Eyes to the Wind" and "Red Eyes" with a precise but rambling ear. 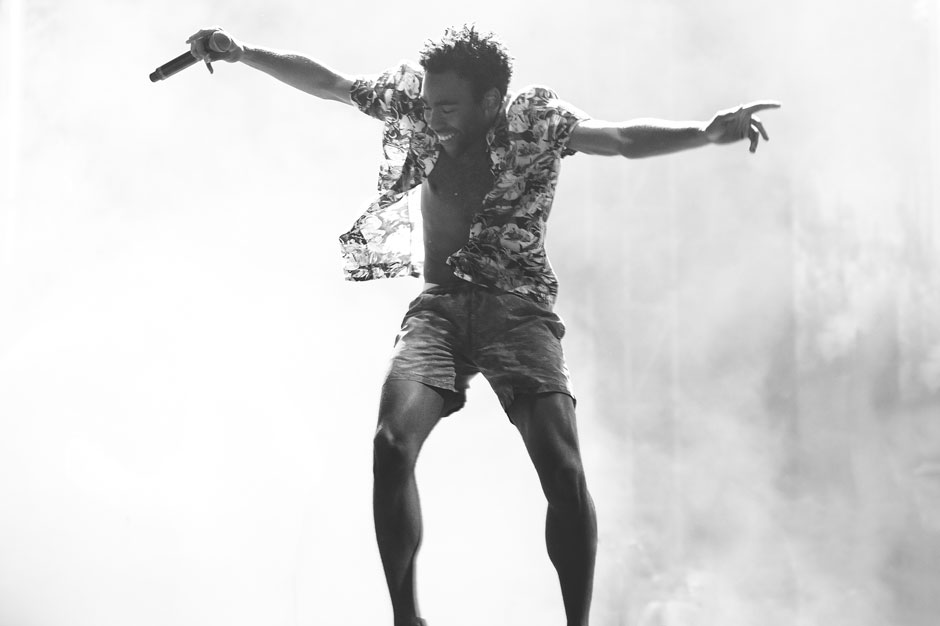 It's hard to top Lorde's Saturday victory lap, and Childish Gambino seemed to sense that he needed to bring some serious energy immediately following the "Team" singer's set. What he failed to understand was that screaming and thrashing do not a performance make. The Community actor-turned-rapper's gorgeous Tumblr lite backdrop was consistently at odds with his barely-there songs, more sketches of things in progress than actually presentable tracks. It was difficult to tell when a song began and another ended, and nearly as impossible to make out anything that the rapper was saying. The exception was on "3005," a radio friendly hit that won the crowd over and one that might just get Gambino to the next level of stardom. 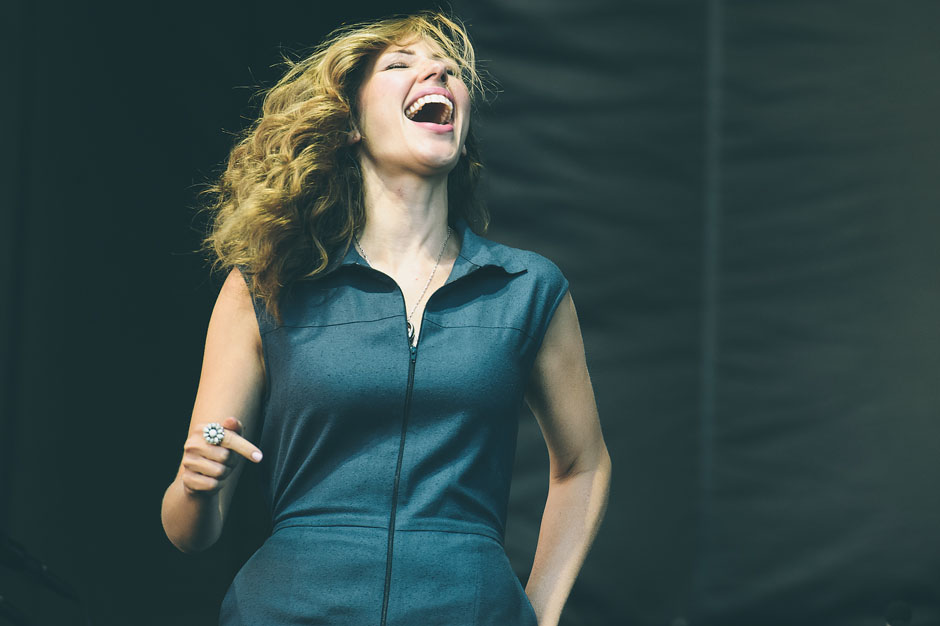 Simple, clean, understated, and harmonious, Boston natives Lake Street Dive kept things low-key during their performance. Though one of the smallest names on the festival's banner, their Bad Self Portraits is a self-assured disc jammed with clever indie-soul songs that dig deeper than most. It's the sort of set more suited to the nearby Life Is Good festival, but one that felt joyously at home at Boston Calling. Lake Street Dive's lead singer, Rachel Price, never stopped smiling as she spent the afternoon shouting out her fellow band members. We couldn't stop smiling either.