From the Boardroom to the Vocal Booth: Taj Tashombe is One of a Kind 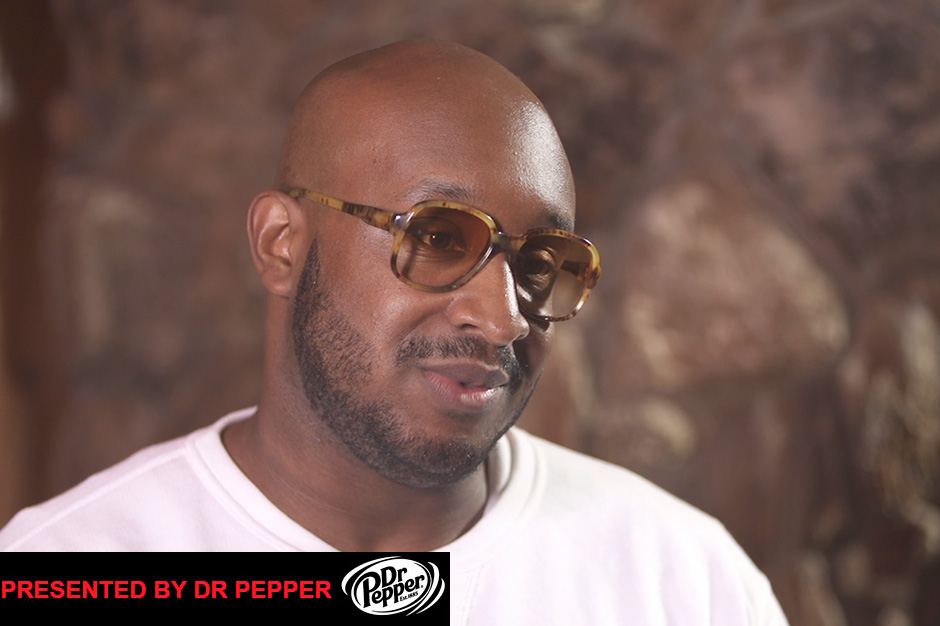 “Fortune 500 companies, they’ve become the new record labels.” This assertion comes from the voice of Taj Tashombe as he leans forward on the lobby couch of Paramount Studios situated in the heart of Hollywood. “Traditional record label models are broken. They don’t have the dollars,” he continues. While Tashombe’s frustration with the state of the music industry is certainly shared by many, his current metamorphosis from branding executive to performing artist has brought him an optimism shared by few, for the time being, at least.

Sitting to talk with SPIN, Tashombe scans over the spread of music magazines in front of him as though looking at a waiting spotlight, his answers as considered as his modern gentleman appearance. He is here as one of four aspiring artists receiving exposure via the Dr Pepper One of a Kind Studio Sessions, an ambitious foray into cultural mixology, blending legacy artists like Wu-Tang Clan founder, RZA and David Andrew Sitek with fast-rising talent like RAC and Tinashe. The result has been three collaborative EP’s and now this fourth featuring Tashombe and other artists hand-picked based on two simple criteria: talent and relative anonymity. For them all, working alongside the likes of RZA, Tinashe, RAC, The Hood Internet, Robert DeLong, Rockie Fresh and David Andrew Sitek is the chance of a lifetime.

Tashombe’s crossover musical story begins backstage and in boardrooms where the foundation of his creativity was born. “On the business side, I’ve worked with Skrillex, I’ve worked with Pretty Lights, a lot of the other EDM artists” he explains “I’ve worked with The Roots, Erykah Badu, Snoop, you name it.” That was all, as Tashombe says, “from the standpoint of trying to get deals and knowing the structure of how this business side works.” With his own branding agency, The Sui Generis Group (Latin for “the crux is unique”), Tashombe has been pairing artists with household brand names for over a decade. His work has been featured in conjunction with the Super Bowl, the Grammys, the Olympics, the Academy Awards and more.

In 2008 though, Tashombe experienced the awakening of a deeper creative call, stepping to the microphone in a Maui studio for a brief moment that grew into a passionate need. His creative work in branding suddenly became the sidelines to a brighter, more challenging game. “Six years ago. That’s when I knew I was going to do music.” After a pause, Tashombe looks off passing a hand over his cleanly shaved head and nods to himself saying, “There’s a lot of patience I instituted into my own process. It wasn’t like I said ‘it’s 2008 and I’m going to have a song out in 2009.’ I committed myself to saying ‘once I have the right ingredients, I’m going to make the right song and that’s going to take off.'”

That song for Taj Tashombe was “Tales of a Tastemaker,” a lifestyle manifesto on the utility of as Tashombe puts it, being an “ambassador to your particular craft…a person who contributes to our zeitgeist, the spirit of our times.” Tashombe was selected by the Dr Pepper One of a Kind Studio Sessions team after his track was featured on a compilation pieced together by acclaimed fashion designer Wariare Boswell, stemming from a friendly conversation about music in which Tashombe shared his desire to make the jump. “That was an endorsement. They endorsed me,” he says with a smile. With that now culminating in a feature on a Dr Pepper One of a Kind Studio Sessions EP, Tashombe is forced to reflect on who he is and how he will use this spotlight. “It’s a different feeling. I think it’s a better feeling, because it’s passion and I love what I do professionally as well, but that’s what I do professionally. This is closer to who I am. This is the real me…creating this persona, I want there to be at least a sense of humanization. I’m growing, I’m learning about myself and I’m not afraid of that process. What you see, I’m a work in progress and the more I’m absorbed in what I’m doing, that more that ascension continues.”

Tashombe’s sense of what matters in artistry is informed by his unique perspective impacted by years of sifting through talent decks and crafting brand campaigns around them. When asked what he thinks audiences are looking for in their artists, he reveals his philosophy. “We typically look to figures of the past that we resonate with or that inspire us but I think the biggest inspiration is from within,” he says. “There are people that pop culture has always identified as the heroic figures of our society but I think it’s more important to find that from within yourself and carry that from generation to generation…I think the subtleties in change are more realistic than the big booms. If we want to do something, it has to systematically be changed block by block.”

That block-by-block mentality that is the hallmark of Tashombe’s work behind the scenes as a branded executive is precisely what makes him a unique fit on the project, bringing authenticity to it without distorting it. Rather than steering away from the branded entertainment nature of the program, Dr Pepper, through Taj, is leaning into it – presenting his creativity honed through marketing as a call for celebration rather than cynicism. “It’s like I’m one of their own and I’ve become a ‘One Of A Kind Artist’ by basically taking their blueprint and channeling it…I just feel so fortunate that Dr Pepper has developed something of this nature because it really helps to shine a light on contributors to society that may not have gotten this opportunity,” he says. “Being cognizant and aware of talent that’s out there that could just use a little amplification…could potentially diversify what is being fed to society. Especially in the realm of music.”

So how does Taj creatively handle the move from crafting pitches to writing lyrics? When asked what his track for this project is all about, Tashombe stirs his tea and laughs, leaning back. “The track – you know – it’s interesting you ask that question because just taking a moment to go backwards on how I would position this if I was working for a brand, I would think I’d want to integrate innuendos that would relate back to the messaging that Dr Pepper has established. I’m actually taking the approach of doing the exact opposite. What I’m doing is creating a track that feels good to me and that I think has tentacles to reach audiences outside of my core audience because Dr Pepper is a brand that reaches beyond what I’m familiar with and into people who aren’t familiar with me. My team and I, we want to get people on the dance floor because that’s something that’s colorblind, that’s diverse. It’s a spirit that can be encouraged. We wanted something that can be translated in America and Europe and Asia, just based on a melodic storyline and song structure that just has no barriers. It’s a feel good track that’s multigenerational as well so if you were drinking Dr Pepper in 1965, we have riffs, we have drums, we have congas, we have horns that can go from then until now.”

Taj’s hope is to inspire others that they have the right to be considered authentic artists, no matter what their background or what roads they take. “I loved taking this opportunity to exercise my uniqueness and hope that it inspires someone else to either pursue an opportunity like this or to step into a passion they may not have if they didn’t hear about this. Becoming an artist that contributes to this project is something I can carry with me for a lifetime – to know that in order to become who you are and find the right avenues for success, you have to be one of a kind. You know? That’s it. Just be you.”

The additional artists on the EP include Jordan Corey, a breaking artist described with a sound that captures the essence of old soul STAX with an indie twist; Archer Black, a Los Angeles based outfit known for producing cutting edge orchestral indie rock; and Asian She, a Los Angeles born collaborative known for their mash up of 80’s new wave with natural guitar tones and classic vocal hooks.

Listen to the EP below: