Q&A: Robyn and Röyksopp on Max Martin, Ziggy Stardust, and Bananas as the Perfect Food

When Robyn and Röyksopp (Norwegian DJs Svein Berge and Torbjørn Brundtland) first went into a studio together in 2009, their resulting “Girl and the Robot” became the most anthemic dance-pop to come out of Scandinavia since Annie’s Röyksopp-produced “Heartbeat” in 2004. Five years after that first run-in, the trio reunited to release a mini-EP called Do It Again, with the hopes that it would be the broader, conceptual project that one-off singles wouldn’t allow. In turn, the five-track EP is a place where the trio shake out their experimental pop, drawing from punk (“SayIt”), spaced-out synths (“Monument”) and Max Martin-influenced power-pop (“Do It Again”). The latter is the project’s undeniable hit, a tongue-in-cheek blend of EDM’s trance-glow glut paired with a thudding bass and Robyn’s vocal despair. “One more time, let’s do it again,” sings Robyn about something (or someone) that’s never explicitly defined. She’s talking about a shaky relationship, an ex, some sex, or maybe drugs. But it doesn’t matter what she’s struggling with exactly; with Robyn, we can always relate.

We talked to Robyn and Röyksopp about bananas, Mexico City, keeping pop trashy, and why they decided to Do It Again.

The video for “Do It Again” was filmed in Mexico City. Did you get to do anything while you were down there?
Robyn: Lots! Well, there was an earthquake, a big one.
Berge: The earthquake was during our shooting. One of the trailers carrying clothes and gear burned up in the middle of the road.
Robyn: We got really drunk on mescal.
Berge: Yes.

Tell me about the truck burning up.
Robyn: The engine exploded, and most of the clothes in the truck were destroyed by this fire on the freeway.
Brundtland: We weren’t physically there because we were in a different car. But there’s video of this fire, and it looks like something out of a movie. Some of it was salvaged due to the unlikely chance that one of the trucks passing by was one of those water trucks that brings water to the area that doesn’t have piping. It had a lot of water, and so they put out the fire. The driver of the car, after it was on fire and started to burn, he actually went into that inferno and started to carry out clothes and burned himself seriously on his arms. When we got to the set, all the clothes that were salvageable were put up in this huge place, an old hacienda from the 17th century, just laying on the ground, drying in the sun, dripping wet.

What made you want to do an EP together?
Robyn: What gets me with Svein and Torbjørn, every time we work together, is that I can go back and listen to their music that I loved because of the way they are able to craft sounds and how much they know about the kind of music that they’re making. But also how playful they are and how easy it is for them to put this emotional world together. It is amazing to me.
Berge: Thank you! We’ve always been fans of Robyn’s. We didn’t know her, but her persona comes through in her music. Even down to the vocal chords, it feels so genuine and true. Also, now knowing her, I know it actually is true. That’s the main thing for us. It’s very distinct. No one sounds like Robyn. 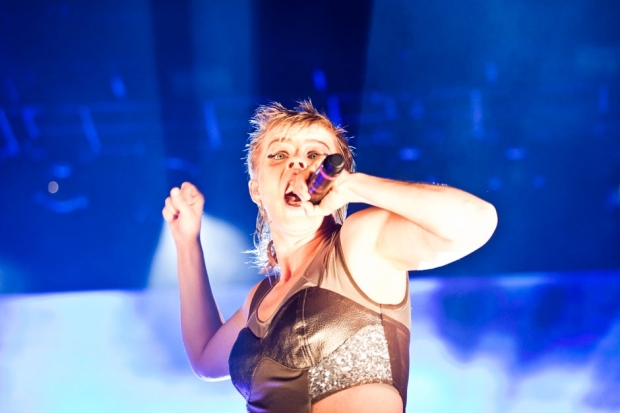 Do you still do the thing where you eat a banana during “Don’t Fucking Tell Me What To Do?”
Robyn: I don’t do that song in the set, but I usually do the banana thing. And it’s not what you think it is! I think bananas are great in the sense that they’re these packaged fruits. They’re very nutritious!
Berge: It’s the only fruit that comes with a casing.
Robyn: Yeah, it has a really good casing. It has lots of vitamins. And I mean, of course apples have a peel, but bananas really have a box that they’re in.
Berge: Like a suit.
Robyn: I also used to have – not an ulcer, but the thing before you have an ulcer – and bananas are really good for that. They can coat your stomach so you can eat things without getting sick. So I just used to eat a lot of bananas. Then I got allergic to bananas. So I don’t eat them anymore. But once in a while I do. And I think eating bananas are also like [says word in Swedish]. What’s his name in English? What’s the guy who eats spinach?

Where did you buy your shoes? Who are your style icons?
Robyn: Rick Owens made these shoes, but I put the sole on it. I do it with this guy in L.A. called Andre No. 1, who makes shoes for KISS and Prince and stuff. So I just buy shoes and I stack ’em with him.
Berge:. I cannot admit to having a style icon. Can I throw in David Bowie? I like Ziggy.
Robyn: You guys have style icons but they’re… [speaks Swedish]. It’s not fashion, it’s something else. And I think that’s really more interesting when it’s not this designer, whatever.
Berge: To me, like, these shoes could be anything from Martin Gore, Depeche Mode in 1987 to whatever. And it’s just all these references that have been piling up over the years. Torbjørn and I have a really keen eye on detail, whether it being in books or music or movies or art or fashion or whatever you want to call this. Detail is what it makes it…detail and individuality. I remember when we were teens, we were reading certain comics, sci-fi, LSD-inspired or LSD-written comics of the ’60s and ’70s. And all these clothes the characters would be wearing, we thought, “Oh, man this would be available somewhere.” But also wondering what kind of fabric is this made out of?

You’ve mentioned being fearful of becoming irrelevant. On Do It Again you can hear festival sounds – dubstep and trance – as pop. Was that to help keep relevant?
Berge: If you’re talking specifically about the track “Do It Again” and not the whole thing, we didn’t intend it to be so cheesy, it just became what it became. But we thought, “Let’s keep this because this is the embodiment of the playfulness.” It is slightly tongue-in-cheek. And we like music that works on many levels without being pretentious in any way. That’s okay, we’ve realized. It’s okay to be a bit pretentious. It’s fine.
Robyn: We thought it was interesting to use this trance, synth sound and to not hold back on the pop melodies or the arrangement going into this very almost Max Martin-like thing. Not flattering ourselves too much because Max Martin is in his own league, but thinking about it as something that is supposed to evoke this hysterical feeling of almost being too much. Something pushing it where it becomes too sweet, too good, too much, that is what the song is about too. We were actually very conceptual when we were writing it.
Berge: It’s filled with references to music stars we also grew up with.
Robyn: There’s lot of music that’s not credible or accepted by the white, guitar-man music world that we all grew up with that matters extremely, very much, to what we do. That was fun to put that in there and balance it out a little bit.
Brundtland: It’s done deliberately, and we know what we’re doing. It’s very conceptual to us. There is a certain trashiness to it almost. And we don’t take this too seriously.
Robyn: Torbjørn pointed this out earlier. It does raise this thing of where the commercial boundaries go with pop music. In pop music, you can always write a good song. It’s maybe even more satisfying actually to make music that you just make for yourself. But then there’s this other thing that happens, and it doesn’t even have to do with quality. It’s this thing where you are writing something or making something that’s supposed to relate to the present time that is supposed to be a comment on popular culture. You involve yourself in this ongoing discussion about where we are at the moment in society. It doesn’t have to be really deep, but that to me is when it becomes pop music and it takes on a different energy then. 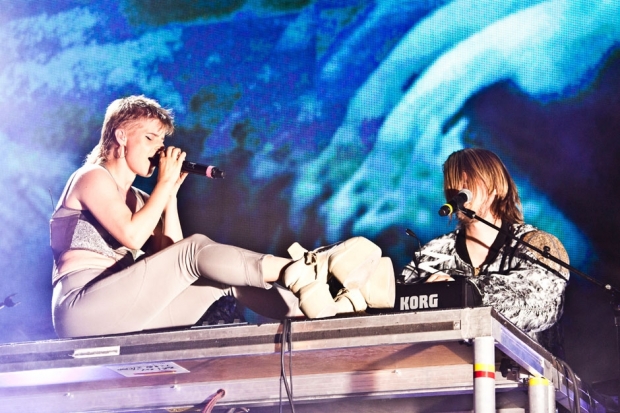 You have these songs that are very cathartic; songs that make you dance and cry.
Robyn: I think it’s a little bit of evoking your actual inner self, ’cause it’s not pretty. When you make a martyr of yourself; you’re feeling sorry for yourself, but you’re also able to laugh at it at the same time because it’s pathetic and it’s very human. I think that all situations have two sides to them. One without the other is never the whole picture. Sometimes you have to realize you’re pathetic and get through it. It’s okay.

Do songs like “Dancing On My Own” or “With Every Heartbeat” register differently after time has passed?
Robyn: Some sort of ambiguity is always good in lyrics, at least I’ve always had a weak spot for that. All these songs are always about events in my life, yeah. I use experiences from my life for these songs, that’s the only way I would be able to go to that place and write them. But if you consider these songs, or “Do It Again,” they’re meant to be conceptual. We are supposed to connect to them, yes. But we can also look at it as a time in life that isn’t there anymore or hasn’t yet happened.

With “Do It Again,” we wrote it together. I think we all connect to the lyrics when we write them in different ways. I have experiences I used when we wrote the song together but, conceptually, it’s a little bit different than when I wrote “Dancing on My Own.” “Dancing” came as a verb; a way to go and dance to this song. “Do It Again” was about so many other things. I mean, it’s about that certain something definitely; the sadness and the happiness and the catharsis. But it’s also about going too far.
Berge: Exactly. It’s about being hedonistic and also being aware of the moral implications or consequences of bad decisions you might have done because you’re an egocentric or whatever.