The Jesus Lizard howler talks about his cat-pun portraits, Lil BUB, and his first kitty, Me Yow 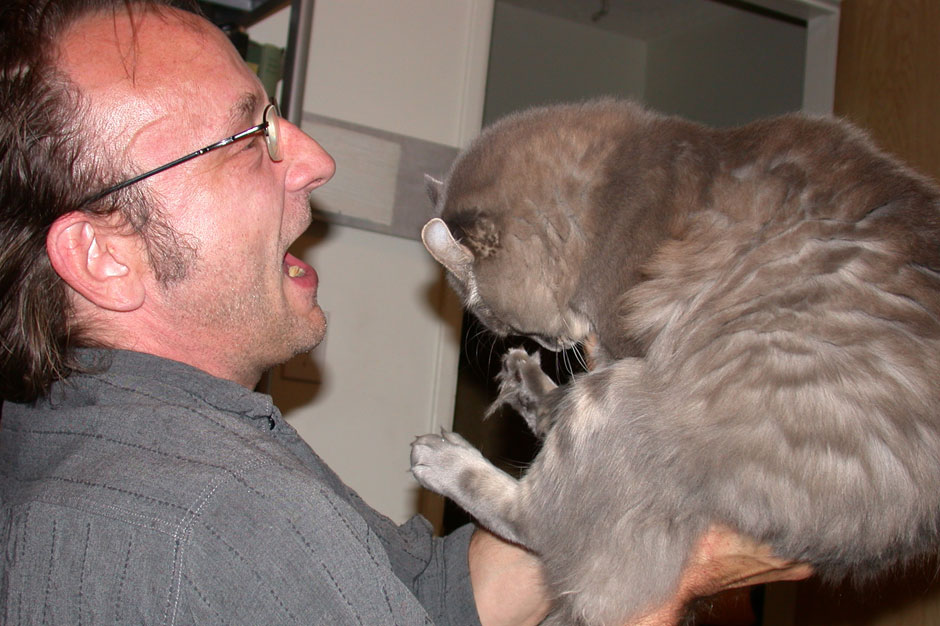 David Yow is not the first guy you’d expect to be emotionally invested in cats. As a live performer, the former Jesus Lizard antagonist has a well-founded reputation for crassly unsettling onstage antics, including wrapping his genitals around microphones (a move he nicknamed the “Tight & Shiny”), puking and then cleaning up the mess with his shirt, and bidding “Happy 9/11 day, everybody!” throughout a 2009 set that took place on that date. But the persona is not always the person, and the post-hardcore singer and actor is also a seriously intense cat lover who’s been drawing cats recreationally for the last 30 years.

This week, Akashic Books releases a hardcover compilation of Yow’s cat-cartoon puns called Copycat: And a Litter of Other Cats. Tomorrow, the Scratch Acid veteran will be in Chicago with SPIN’s recent profile star, Lil BUB, where they’ll conduct Lil BUB’s Big Show live. We spoke with Yow recently over the phone from his Los Angeles home.

How did you first hear about Lil BUB?

Oh golly, I don’t know. I think the first time I was really aware of her was when she interviewed Steve Albini on her show. There are a few examples throughout history and the movies with some really, really, really simple things that are so fuckin’ perfect. One of the questions that Lil BUB asks Steve is, “Do you have a job or something?” and I thought that was so fuckin’ good.

Are you somebody who engages with cat videos on the Internet? If somebody shares a video of a cat riding a vacuum in a shark costume, will you watch that?

Yes, many times. There are some great ones, but my favorite is still: There’s a tiny little black-and-white kitten, and a big fat orange cat, and then the black-and-white one is standing with its hands up, sort of casting a spell on the orange cat. He’s like, ‘Man I’m freaking you out, you don’t know what the hell’s going on,’ and then all of a sudden the orange cat goes ‘POW!’ and takes the little kitten out. I’ve watched that over and over for 15 minutes — and it’s only about 15 seconds.

Did you watch Tara the Hero Cat video when that first went around?

Oh yes! Yes, that’s outstanding. That speaks volumes about cats. The cat was just not gonna have that: “Man, you cannot fuck with our family.”

As the frontman of Jesus Lizard, you’re the kind of performer who’s shown off his balls onstage and puked and used your shirt to clean it up. Are people surprised to learn you are a cat person?

Yeah, but only because they don’t know me. Whenever you’re in [a] level of the public eye, people think they have some idea of what you’re about because of what you do onstage or on records, but that’s just ridiculous. If you ask anyone who knows me, they’re not at all surprised.

I would be much more excited to talk about the cats. I would never tire of that. I’ve talked about Jesus Lizard way, way, way more than I need to and I have had to repeat myself a hundred thousand times. So I would be nice to the idiot that asked me about Jesus Lizard, but I would be more likely be dismissive of that person and take the other person’s hand and lead them off to some bar.

How did the book come together?

I had done a cartoon of a cat that had a T-shirt on that said “Tom.” [The project’s evolution] ended up that the criteria for the illustrations was that it had to have C-A-T in that order. You know, so: Catalog, Catamaran, Cataract, Cat and Mouse, Copycat, Catty Corner. I think I did about 20 or 30 of them on these little Post-It Notes and gave them to my mom and she stuck them on a big board they had in their house in their laundry room. I drew them every now and then for — I don’t know — 30 years. Johnny [Temple] and I at Akashic were talking about it, and I suggested the stupid idea of doing a stupid book. It will make the world a better place. 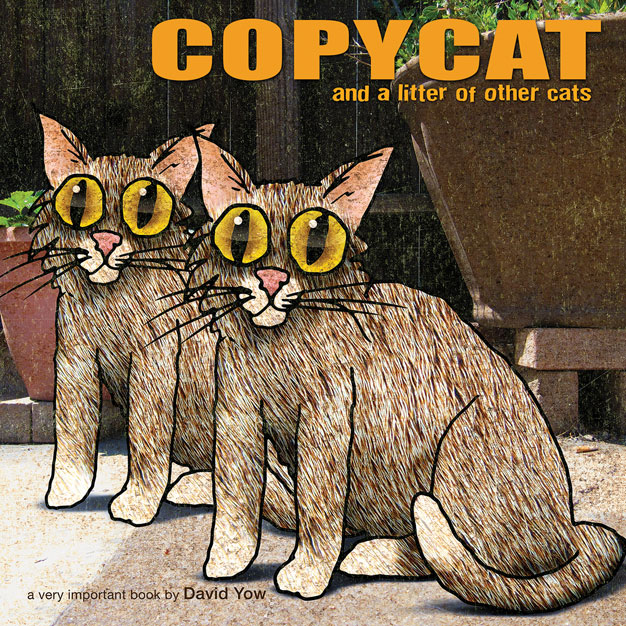 So you’ve had cats your whole life?

Cats are really important to me, ever since I was a little kid. My father was in the Air Force, so we moved in North Africa in Tripoli. My dad didn’t like cats, but my sister and I found this kitten and talked my dad into letting us keep it. He was kind of clever, so he named the cat Me Yow. Since our last name is Yow, he’d say, “Yeah, she’s the only cat in the world that can say her own name.” So I was pretty crazy about cats ever since then.

So Little Buddy is your present cat. What’s he like?

He had a bad childhood because I was living alone, which was the first time in my life I had ever lived alone. I was kind of a deadbeat dad because I had just gotten out of a 15-year marriage and I was out carousing as much as possible, and sometimes I wouldn’t come home. Then I’d go out of town and have other people take care of Little Buddy who weren’t necessarily as responsible as they should have been. So I think he had a lonely and depressing childhood. But he was cuter than cute; he was the runt of the litter. Now he’s eight years old and he’s grown up to be a very, very regal and strikingly magnificent example of a pussycat.

He’s just crazy about me. He doesn’t really like to be picked up, but I can pick him up — I can hold him until my arms give out. Every day, we have a ritual on the floor, in the kitchen, cross-legged, and we call it ‘The Thing.’ As soon as I sit down, Little Buddy saunters over and climbs on my lap and adjusts himself into the perfect ‘Thing’ position. He’ll just sit there, and purr when I pet him for about 20 minutes, and then he just gets up and leaves. That’s every day, at least once a day. I spend a lot of time in the kitchen and sometimes he’ll just stand, and look at me, and go, ‘Dad, can we do ‘the Thing’?’ So I’ll sit down and do ‘the Thing.’

What are the names of the other cats you’ve had?

In the Copycat book, there is a small list — and I conferred with my sister to make sure I hadn’t forgotten any — of all the cats that I’ve had. But there was Me Yow, Spunky, Miss M, Boo, Honey, Precious, Hugh, Space Monkey, David, Algernon, Grady, and Rizz Rizz Rizz.

Space Monkey, yeah. That was during the Scratch Acid days, when we were practicing in my bedroom and we put carpet on the walls of my bedroom to soundproof it. You could stand on one side of the room, and throw Space Monkey onto the other side of the room, and she would attach herself to it, and climb the wall. Our bass player had a cat named Orson at the time. The cats would chase each other up the walls which was pretty cool.