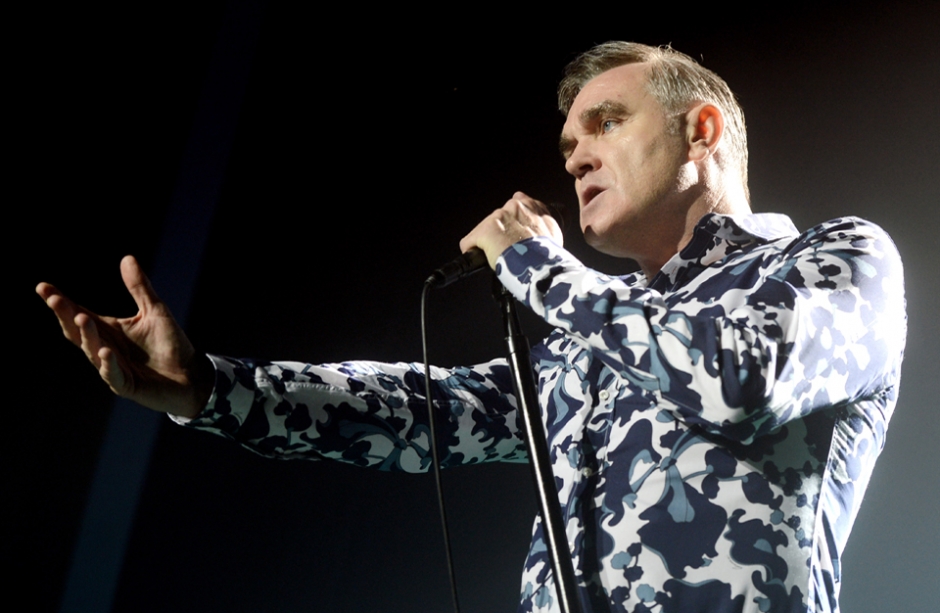 There’s been a lot of drama in Morrissey’s life this summer—he cancelled a bunch of tour dates, got dog-piled at a California concert, and was slapped with a lawsuit by a former security guard who alleged that the Smiths singer wanted to take a hit out on one of his fans—but we’re glad to see it hasn’t phased him. Judging from the looks of his latest blog post, he’s up to the same incoherent, zany tricks. We’ve spent quite a bit of time deciphering the missive, which reads like a rallying cry for global political action and an indictment of the music industry.

He starts by thanking three Youtubers for uploading fan-made videos soundtracked to songs from his recent album, World Peace Is None Of Your Business, and says the label should have picked one of them up. Morrissey is for the people. But from there, the post quickly stops making sense.

Moz then connects songwriting to “monarchic rule” and the idea that “meat consumption is climate change,” which in turn is related (in his mind) to the royal family and the recent Malaysian Air plane crashes. Soon, the ambiguous thoughts metastasize into a invocation for change:

“Do not feel powerless,” he writes. “There are more people than there are aging despots.”

He also offers some programmatic advice for how to enact change in the world, including a polite request for everyone to stop watching Fox News. And then, inexplicably, he ends with an announcement that his next tour will kick off in Lisbon on October 6—if he doesn’t cancel it, of course. If he does, however, boy have we got a T-shirt for you.

Here’s the full text, from True to You:

I am indebted to three sources that have placed their own well-crafted videos on You Tube for the song World peace is none of your business. The three individual sources are named as Sharon Jheeta, Héctor González and wpeace123456. These videos fully understand the intent of the song, and I am relieved that these films exist. Yes, a similar document ought to have been harvested by the record label, but please understand that the pop or rock industry can be as dedicated to perpetuating public deception as the world of politics itself. God bless social media!

Liberty, equality and fraternity are the essence of the song; no monarchic rule, no political hierarchies, no bought-and-paid-for government thugs, security forces no longer beyond prosecution, and an end to megalomania, repression and corruption. Meat consumption is climate change, and if ever there were a self-evident lost cause it is the British so-called “royal family”. Societies have never been so nervous; Pan Am Flight 103 differs not a jot from Malaysian Flight 17. The United Nations failure to imprison Tony Blair and George W. Bush for war crimes against Iraq has told us all that there can never be enough bloodshed, and the world is suffering its worst nervous breakdown. Do not feel powerless!

Many apparently powerless causes have succeeded in shifting political stupidity and greed. You are intellectual sanity. It is possible for nonviolent change; there are more people than there are aging despots; there are more people than there are world leaders. In truth, the world is leaderless. Please stop watching Fox News; anti-monarchial Britain has given up on the BBC – we know that every slot is paid for. We know that the number 1 position on the pop charts is “bought”; this is not 1955.

Thank you to all of my friends in Israel, Chile, Sweden, Poland, Argentina, Hungary, Romania, Finland and Italy who bought World peace is none of your business. It is 30 years on since The Smiths album entered the UK chart at number 2 with zero airplay and zero promotion, and the struggle for the airwaves remains difficult. Yet, I am writing this to you now, and you are reading it.

In answer to many people who have asked, I should like to finally make it clear that I have not received any television invitations – worldwide! – to either discuss World peace is none of your business, or even to sing any songs from the album.

Thank you for reading this. We have our first World peace is none of your business concert booked in Lisbon (Portugal) on October 6th.

All we have is each other.

for the animals, for intellectual sanity …