'Breaking Bad' spinoff will hit the small screen in February 2015

While we may never see that crazy Breaking Bad sequel starring Slash and Val Kilmer, we now know planned spinoff Better Call Saul has a February release date thanks to a new teaser-trailer that aired during an AMC marathon over the weekend. In the nine-second clip, Bob Odenkirk’s newly youthful and thick-haired Saul Goodman makes a vague threat about the general need for legal representation.

“Lawyers, we’re like health insurance,” Goodman explains dryly. “You hope you never need it, but man, oh man, not having it? No.”

Aside from brief trailers, AMC has also teased the show with a series unassuming billboards in Albuquerque, New Mexico, that promise the legal services of one James A. McGill, alongside the likeness of our favorite Puscifer fan. As Vulture notes, there’s a working outgoing message associated with the phone number on the board which you can hear below. Apparently the show will take place in 2002, when Goodman was working under that name.

Little else is available at this time so while you wait for the February 2015 premiere, watch the trailer above, and check out our ranking of the best musical moments from the Golden Age of Television, which can’t help but include some Breaking Bad pairings. 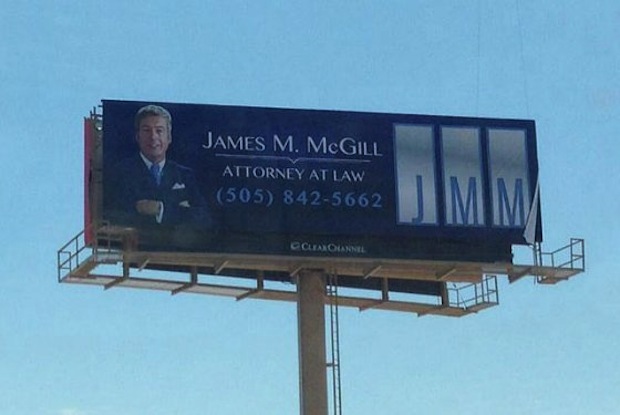