In light of the recent death of Tommy Ramone, this might be a good time to look back at another one of the iconic drummer and producer’s many skills. In addition to the man’s musical talents, he also proved to be a savvy manager for the Ramones, as evidenced by this snarky press bio he wrote in 1975.

Penned under the name Tome Erdelyi, the Americanized version of his Hungarian name, the one-sheet offers a dramatic declaration of intent.

Instead, offers Tommy, the punk progenitors sound like “a hundred howitzers going off” or “a fast drill on rear molar.” He then explains that kids from the band’s hometown of Forest Hills, Queens had three career paths: musician, degenerate, or dentist. Based on the legacy that Tommy and the rest of the band has left behind, we’re pretty fortunate that they chose the first option. Read the whole bio below, originally via TwentyFourBit.

The quartette consists of Johnny, Joey, Dee Dee, and Tommy Ramone, Johnny, the guitarist, plays with such force that his sound has been compared to a hundred howitzers going off. Joey, the lead singer, is an arch villain whose lanky frame stands threatening center stage. Dee Dee is Bass guitar and the acknowledged handsome one of the group, and Tommy is the drummer whose pulsating playing launches the throbbing sound of the band.

The Ramones all originate from Forest Hills and kids who grew up there either became musicians, degenerates or dentists. The Ramones are a little of each. Their sound is not unlike a fast drill on a rear molar.” 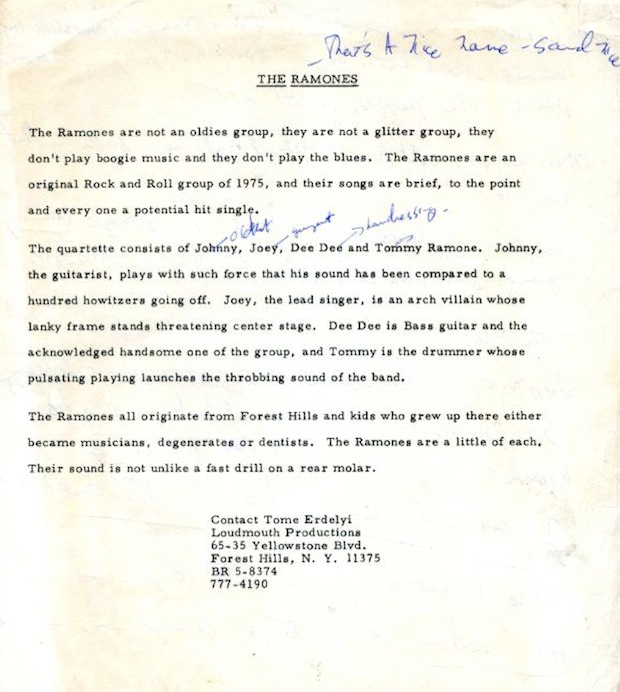