"I still feel like I haven't hit the tipping point yet," says Hook on his success. "But one of the things I'm most grateful for is that this is my career. 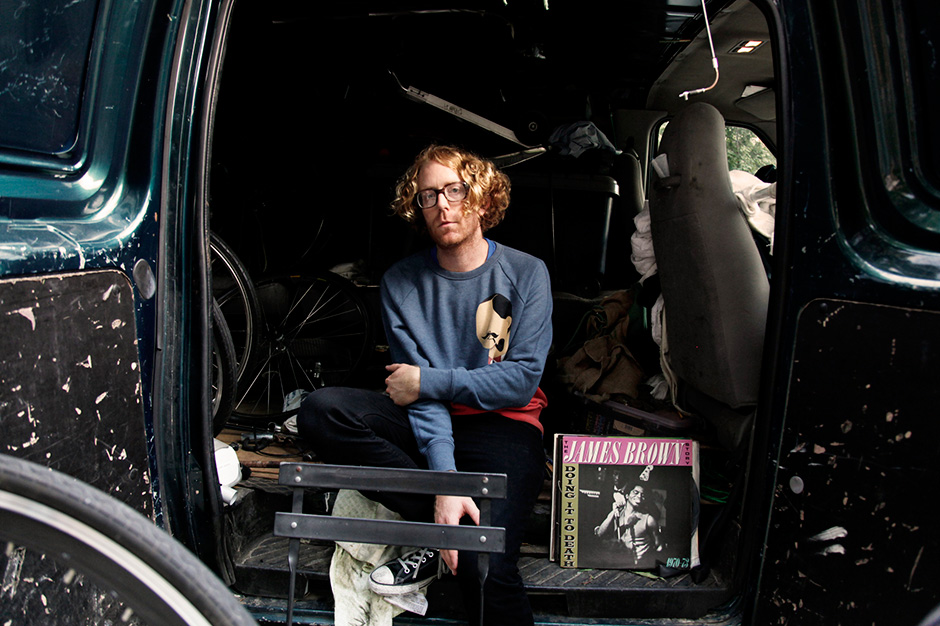 This success comes as no surprise to Nick’s friends, or anyone who has crossed his path. his limitless energy, disarmingly friendly demeanor, and genuineness is front and center and reflected not only in his personal interactions, but also in his musical approach. This fearless approach to life, music, and friendshop is what catapulted from his role in Cubic Zirconia to recording Azealia Banks debut project, and to numerous engineering, producing, writing, and recording credits on projects with artists like Young Thug, Hudson Mohawke, Baauer, Machinedrum and more.

We caught up with Hook to chat about his evolution as an artist, keeping calm while recording in Barcelona in between weekend DJ gigs across Europe.

Can you talk about how you got your start in the music industry?
I started playing guitar I was 12 or 13 and was in a band that was ripping off Helmet and Deftones and stuff and I ended up meeting this dude in a local band of guys that were 30 or so and were really popular but they never got signed. We were opening for them when we were 15 and16 and somehow everyone in town thought I was 21, so I could go out with him anytime. We opened for them and he recorded our band so I watched and learned how professional things worked. A few years later this radio DJ gave me a copy of Fruity Loops, Acid and Reason (music software) and I was hooked. It was the first time I could make music alone, outside of a band context and for free! I made shitty music but I was learned how to record music I made on a computer to a 4 track cassette recorder.

Fast forward to a few years later, I became friends with the band Glassjaw, and they took a break. Their guitar player Todd asked me to come to New York and write some “video game” music for a joke as a one off. Looking back, I really think at that time I might have been the only person he knew in the world that could sequence drums and make an 808 go on top of a kick drum. I took a week off work and we had a great time but I had no fucking idea what it was going to lead to.

At one point early in your career you were in a band that got signed to a major label, resulting in you leaving St. Louis for New York. Ultimately, that situation fell apart – were you scared that would be the end of your career?
No it wasn’t scary at all. We signed a deal and released a record. I don’t know if you have ever burned thru a million dollars of someone else’s money, but I have and it was fucking amazing. That part was fun, but the real amazing part was what I got to learn. We worked with everyone from Howard Benson who does terrible commercial rock, to Mike Mogis (Bright Eyes, Cursive, The Faint), Jason Lader, Mickey Petralia and Gareth Jones who produced a bunch of Depeche Mode stuff.

The most important part was that I learned the process of making a record. I was always the first one in and last one out, offering my help with editing and doing really whatever I could to take the burden off the producers.

What happened that kept you moving forward?
After our band broke up the guitar player Todd and I embarked on a new project. We didn’t know what it was going but we ended up meeting the singer Tiombe Lockhart – she’s incredible. We started a new band called Cubic Zirconia and called our music ethnic disco because it was a little post punk and super insane. Starting a new band was a big step because it was mostly all my music where in the last band I was kind of held down. I got to experiment and challenge my self with the trust of Todd and Tiombe.

We ended up signing to Fool’s Gold and it was a great period for me. Reinvention is so important in what we do and this was the first time I learned that it’s ok to start over. It really isn’t starting over but it’s using the framework of what you’ve built and not resting on the old fans or your laurels.

There is an old music industry adage, that every overnight success is 5-10 years in the making; how did you go from that point to working on records with people like Young Thug? Was there a specific moment that felt like the tipping point?
No, there hasn’t been. I think it’s always been about being ambitious, taking risks, and people seeing you do things. I still feel like I haven’t hit the tipping point yet, but one of the things I’m most grateful for is that this is my career. It never seemed real to me and I saw a lot of friends fall out at 30 and that’s when my shit really started to actually formulate and become real. It was literally 10 years of hard work, no one thinking I was cool, then all of a sudden tastemakers like El-P or Drop The Lime starting to work with you or doing a track with Hudson Mohawke or Azealia Banks and all of a sudden people think they were down with you since day one when they were really giving you the cold shoulder. I always felt like once you earn respect people can never take it away.

How did you learn the skills to take on the multi-faceted role of producer, engineer, songwriter, and instrumentalist?
I grew up playing in bands and I didn’t know the names for things. When someone told me what a topline was, I was like “oh that’s just writing a chorus”, engineering was just “recording our singer”, producing was “communicating with your band mates” while you were writing and making everyone believe that we were working together on a common goal. I actually never for once thought I was a producer until [Night Slugs founder] L-Vis 1990 asked me and we had the most wonderful time making the record.

I learned that in this new age of music there are so many talented kids in a bedroom making music but it gets so dark doing that, there is no teammate or someone to push them and make them think and focus. I really enjoy making people better and learning how I can help them be the best them. It’s an unsung role to be in this position especially as an engineer but its almost like some basketball shit where you are driving the whip and creating this energy and if you are good enough at it you can get someone out of body during a session and that’s where the magic lies. I strive for that and I live for that.

What was it like to write and record Without You, the first album you released as a producer after being an instrumentalist?
Making that album was just something really personal for me. I went through a breakup with my girlfriend of 10 years, my band was breaking up, my life was transforming. It was really the year in my life that I never thought would happen, and I look at music like a time capsule. It was my first solo material in my life, and I was lucky enough to work with the people at Scion and Daniel, the A&R was like “turn it in when it’s done” which is how I do my best work. Everyone that I collaborated with on the album was a friend and were pivotal in helping me through hard times. Luckily they were talented as fuck, but I picked everyone on that album to work with because they were there for me and the title alludes to that.

A quick glance at your social media shows you in the studio or performing, somewhere around the world seemingly every day – what are some recent projects you have worked on?
Yeah, I have been working a lot. I just dropped a tune with Young Thug, Asap Ferg and Freddie Gibbs that Salva and I produced that’s really special to me. I am also executive producing Baauer’s LP which is going to be so fucking awesome and people are going to be like “damn son!”

I am also working on two of my own new projects. One is a pressing for Serato that is going to be a documentary. We filmed the whole process and it will end up in the vinyl pressing plant cutting plates. I worked with Todd Edwards, Bernie Worrell from the Parliament Funkadelic, Lenny Castro (Toto), Bodega Bamz, Sliink and Nadus, Egyptian Lover, Sunni Colon and I am locking down a few more vocals. A new Dochook record which is Doc Daneeka and I comes out soon on a Play It Down compilation. Then I have a bunch of stuff that DJ Rashad and I were working on I that I want to finish. MachineDrum and I just finished one and it means the world to me. R.I.P. Rashad. I miss you bro.

For a while you had your own advice column on XLR8R where you offered people all sorts of advice on usually the topics of music, and life, if fact usually a combination of the two. It seemed like so many of the questions people asked were people looking for direction in how to be successful in music. Is there one piece of advice you could give to a person interested in pursuing music?
Do things that make you feel things. Do things you will standby forever. This isn’t a sprint, I didn’t start doing this to have to quit at a certain point, I keep learning more and more and getting to share more and more. Don’t get caught up in a frenzy to make it, because you are either goingto be late, or even if it does good no ones going to remember it in 2 week. Also – have a good fucking time. We didn’t start playing music when we were 13 to buy houses on the hills, we did it because it meant something to us and it made us feel a certain way. I feel like if I always carry that with me I will be ok.

How do you describe yourself when meeting someone for the first time?
It’s hard to describe myself which is actually the blessing and the curse of my career. I’ve kind of come to a place where it’s better not to talk about it, or describe what I do, because I realized if my managers and my booking agents don’t understand what I do no one ever will, which I’m totally fine with.