Also: a 14-year-old Phil Elverum of Microphones and Mount Eerie

Incredibly, charming bits of vintage Nirvana-related material still exist to be recirculated online. The alternative-rock standard-bearers’ past has been tirelessly exhumed in recent years, between the Rock and Roll Hall of Fame induction, the Kurt Cobain death-scene items and photographs released by Seattle police, and the 20th-anniversary reissues. But there’s clearly still more to dig up out there, because WashedUpEmo (via Noisey) points to a newly YouTube’d MTV News clip full of interviews with Nirvana fans on hand in Seattle on September 11, 1992, for the group’s first hometown show since Nevermind got huge. One of those fans was a young Phil Elverum (c. 1:55; also, below), who went on to indie-rock glory with the Microphones and Mount Eerie. Another is a guy with a hacky sack, who says of Nirvana’s success: “It sucks. That’s why they’re cool.” Actually, on second thought, there can’t be anything else of interest out there about this band. The ’90s have officially been encapsulated.

Check out SPIN’s classic Nirvana coverage, before it’s too late: 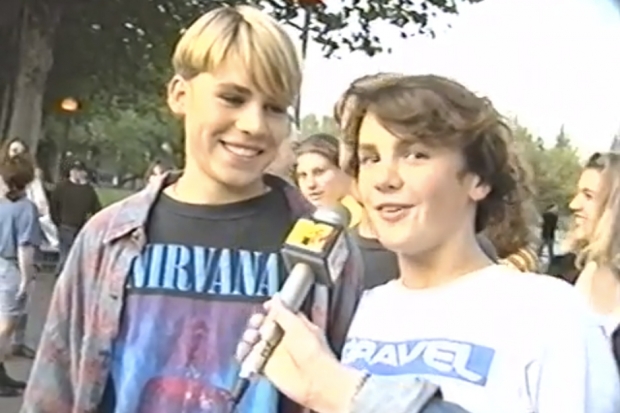 And the confirmation, gently sussed out by a Twitter fan:

@jshmsh yes I saw Nirvana Seattle twice in big stadiums. I sat in the back and headbanged, seated.

@jshmsh Yes I was on Headbangers Ball after that Nirvana Seattle show and my seated banging. Loder was not a good listener.