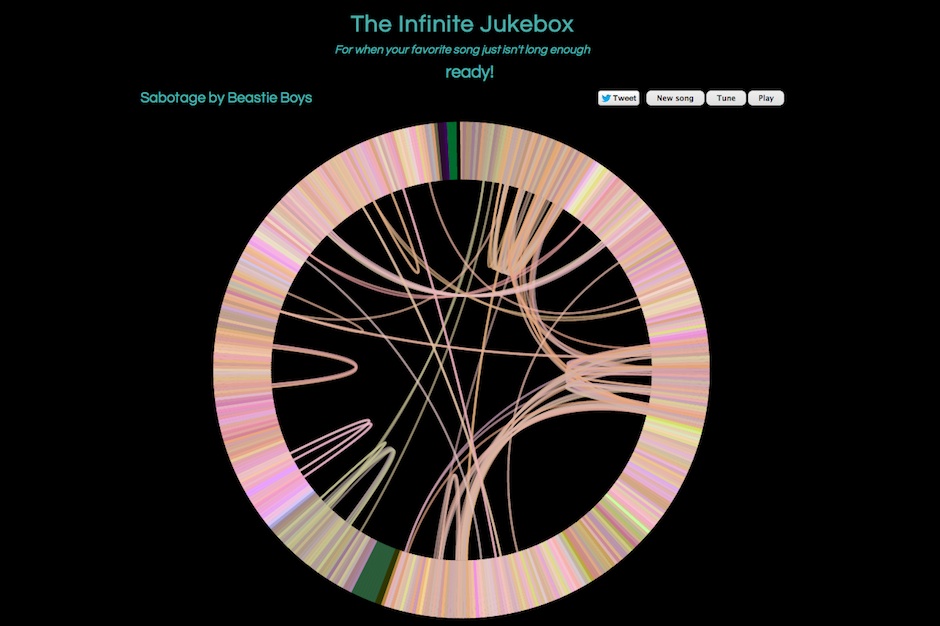 In 2012, Paul Lamere of a music-technology company called The Echo Nest introduced “Infinite Gangnam Style,” which allowed Web users to listen to a never-ending, constantly shifting version of PSY’s 2-billion-view YouTube hit. Since then, The Echo Nest — now owned by Spotify — has drawn attention for posting a series of maps (among them: each state’s most distinctive music, each state’s most popular music, and each state’s most neglected music).

In the meantime, though, Lamere and the Echo Nest also came up with “The Infinite Jukebox,” which allows you to upload your own MP3 and melt your mind as it plays on forever, or as long as you can stand it. The Echo Nest explains: “For when your favorite song just isn’t long enough. This web app lets you upload a favorite MP3 and will then generate a never-ending and ever-changing version of the song. It does what Infinite Gangnam Style did but for any song.” The tool has been online for a couple of years, but WFMU flagged it today, and it’s probably due for some fresh uploads.

The Infinite Jukebox works by breaking up each song beat by beat. There’s a random chance at each beat that the app’s version will jump to a different point in the song that happens to sound a lot like the previous beat. Listeners can control the playback with a number of keyboard commands. “For beat similarity we look at pitch, timbre, loudness, duration, and the position of the beat within a bar,” The Echo Nest writes. “There’s a nifty visualization that shows all the possible transitions that can occur at any beat.”

Songs uploaded so far include everything from “Gangnam Style” and Carly Rae Jepsen’s “Call Me Maybe” to the Beastie Boys’ “Sabotage,” Donna Summer’s “I Feel Love,” and the Smiths’ “Some Girls Are Bigger Than Others.”

Try out The Infinite Jukebox here, or read the FAQ here.